Press Release: Mobile Application Market Is Expected to Witness CAGR of 11.7% During the Forecasted period (2019-2027)

Mobile Application Market Is Expected to Witness CAGR of 11.7% During the Forecasted period (2019-2027)

A mobile application or an app is a type of application software that is designed to run on a mobile device such as smartphone or tablet computer. Initially, the apps are intended for productivity assistance such as calendar, email, and contract databases. However, growing demand has led to expansion of various other uses such as games, GPS, order-tracking, ticket purchasing, location-based services, and more. The mobile applications are downloaded from applications distribution platform, which is operated by mobile operating system owners such as Google Play Store (Android) or App Store (iOS). Some of these apps are free to download, while some are paid.

The global mobile application market was estimated to account for US$ 54,498.7 Mn in terms of value by the end of 2019

Mobile ad industry has witnessed significant growth in the recent past, owing to high adoption of mobile devices such as smartphones, tablets, and more. According to Coherent Market Insights’ analysis, in 2016, the global mobile industry accounted for over US$ 100 billion in terms of expenditure and exceeding 50% of total digital ad expenditure. According to the same source, in 2014, mobile app ads accounted for over 30% of the total mobile advertising revenue. Hence, high growth of mobile ad industry is expected to boost the global mobile application market over the forecast period.

Many retailers are focused on finding opportunity for market development without physical footprint. Consumers prefer buying products on online platform instead of local retail stores, especially smartphones. This indicates that there is an opportunity for e-commerce as well as for mobile application companies across the globe. Moreover, many investors have shown interest in e-commerce platform in the recent past. For instance, in September 2014, Alibaba, a China-based e-commerce platform, invested US$ 25 billion in initial public offering (IPO) in e-commerce. Therefore, continuous expansion of e-commerce industry is expected to support the market growth in the near future.

Changing lifestyle refers to changing habits, beliefs, financial status, morals, and purchase parity of an individual. . Understanding the lifestyle trends of the population allows a business to better market itself so that the business can easily change its strategy if those trends change. Connately changing lifestyle and spending habits across the globe are expected to accelerate the market growth over the forecast period. 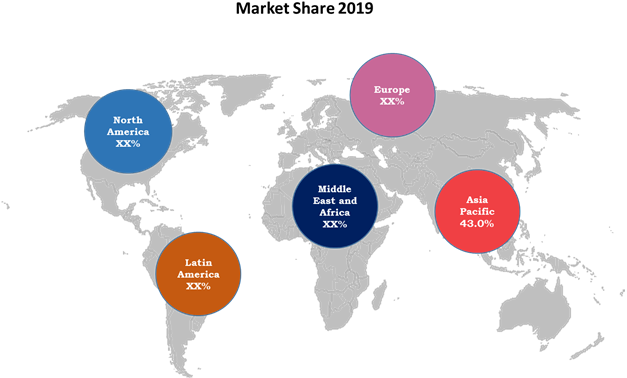 Mobile device manufacturers are not able to sustain the intense competition and keep up with mobile app developers. Applications designed for specific functions require equally advanced device features. In order to resolve this problem, consumers need to shift to smartphones with advanced features that permit operational efficiency of mobile applications. Hence, these factors are expected to hinder the market growth over the forecast period.

Various technology companies are investing significantly, in order to accelerate digitalization in emerging economies. For instance, in September 2015, Qualcomm Inc., a U.S.-based semiconductor and telecom equipment manufacturer, invested US$ 150 million in Indian startups. Such investments are expected to offer lucrative business opportunity for market players to expand their product portfolio, enhance their market presence, and gain competitive edge in the market.

Global mobile application market, by store type segment, between apple app store sub-segment was accounted for 46.9% market share in 2019 and is expected to grow at a CAGR of 11.4% between 2019 and 2027. 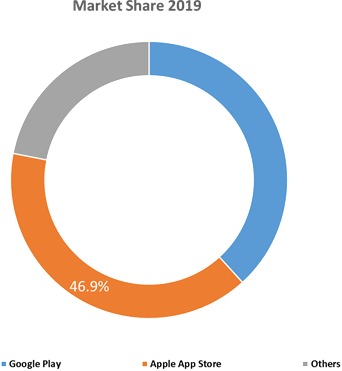 Different businesses have launched their own apps, in order to expand their consumer base and increase revenue generation. For instance, Amazon, eBay, Alibaba, etc. are e-commerce platforms, while social Facebook, Instagram, Twitter are social media platforms. There are m-health apps for women health, fitness, weight loss, and personal health medication and record. Furthermore, there is constant battle over consumer base between two major IT organizations namely Apple and Google. According to CMI analysis, consumers prefer Apple mobile applications over Google mobile applications in the U.S. with loyalty percentages of 89% and 84% respectively. According to the same source, With respect to the operating system, iOS has the strongest brand loyalty followed by Android, with brand loyalty percentages of 89% and 68% respectively in the U.S. Moreover, in 2015, 2015, Google had no competitors among the Android operating system segment with its brand loyalty reaching 82% in the U.S.

Time spent on mobile apps and web is higher than time spent on PC web. According to CMI analysis, in December 2014, Britons spent 44 average hours with their mobile apps. According to the same source, In December 2014, it was found that Italians used their mobile apps for about 40 hours, twice as much as they spent on the web through their PCs for over 20 hours. Moreover, rapidly expanding e-commerce industry in the region is another factor boost the demand for mobile applications. For instance, in 2013, the e-Commerce industry contributed around 24.1% of total enterprise revenue in the European country of Czech Republic. 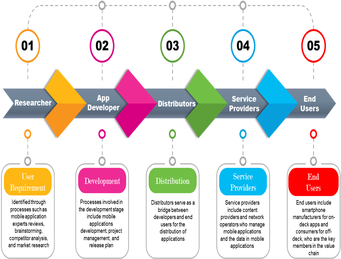 The adoption of the mobile application is majorly getting increased due to the rising number of mobile phone users and the increasing customer base for the e-commerce industry. For instance, according to United Nations Industrial Development Organization, the E-commerce sector in India is projected to reach USD100 billion by 2020 and USD300 billion by 2030 and is already changing the way MSMEs operate in India.

In addition, increased application of augmented reality and virtual reality applications is boosting the adoption of mobile applications over the forecast period. The smartphones are enabled with various sensors like gyroscope, and motion sensor, which is further expanding the capability of AR and VR games like Pokemon Go, owing to which mobile game application is majorly getting downloaded.

The influence of digitization has led to a significant shift in consumer adoption-pattern from the usage of convention...

In oil and gas industry there are three segments such as upstream, midstream, and downstream. Upstream involves explor...

Data erasure and data destruction service is used to permanently delete data from the hard drive. Companies and govern...

Edge emitting laser is a type of semiconductor laser where the laser light is propagating parallel to the wafer surfac...