Molecular diagnostics tests are used for detecting disturbance between specific sequences in DNA or RNA, which may be associated with disease. The disturbance between a single nucleotide polymorphism (SNP), deletions, rearrangements, insertions, and others factors lead to various diseases. Disease that are diagnosed by using molecular diagnostic test includes infectious diseases, oncology, virology, and STDs.

High prevalence of infectious disease and increasing incidences of cancer are expected to be the major factor fueling growth of the market over forecast period. For instance, according to the Centers for Disease Control and Prevention (CDC), in 2015, around 5,251 deaths were reported due to influenza infection in the U.S. Furthermore, according to a National Cancer Institute, 2016, an estimated 16.8 million new cases of cancer were diagnosed in the U.S. with an estimated 595,690 deaths from the disease. The number of people with cancer is expected to rise to 19 million by 2024. 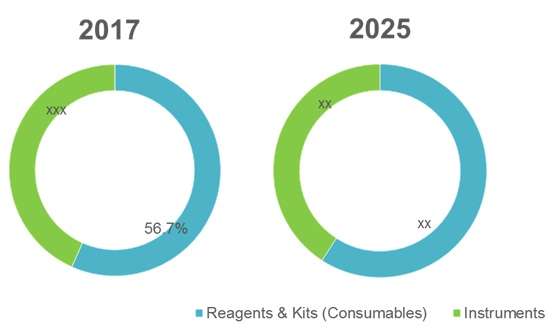 Application of biomarkers in molecular diagnostic is increasing, due to advantages of biomarkers such as aiding in early detection of specific diseases. For instance, biomarkers are used in detection of ABO haemolytic diseases in new born, Huntington's disease and hereditary haemochromatosis, and cystic fibrosis. Biomarkers are also used in detection of disorders related to chromosome structure such as Turner syndrome, Down syndrome, patau syndrome, and Edwards’s syndrome. Furthermore, biomarker also have wide application in therapeutic areas, which includes neurological diseases, metabolic disorders, immune deregulation, and oncology.

North America accounts for the largest share in the global molecular diagnostics market and this is attributed to increasing adoption of precision medicine and growing prevalence of cancer. According to a National Cancer Institute, 2016, an estimated 16.8 million new cases of cancer were diagnosed in the U.S., with around 595,690 deaths from the disease. The number of people with cancer is expected to rise to 19 million by 2024, in turn increasing the demand of the molecular diagnostics market in the near future.

Furthermore, the U.S. government, in 2015, launched Precision Medicine Initiative that aimed to revolutionize the treatment to improve health, as precision medicine provides an innovative approach that takes into account an individual’s differences in genes and offers tailored treatment. Precision Medicine Initiative have led to development of novel products and several new treatments are tailored for specific characteristic such as, person’s genetic makeup or genetic profile of an individual tumor that helps to transform the way of treatment. The Precision Medicine Initiative was valued at US$ 215 million in 2016 that could accelerate biomedical research and provide clinicians with new tools to select the innovative therapies tailored according to individual needs that, in turn favors, growth of the market of molecular diagnostic.

Molecular diagnostics is used for detection in various applications such as oncology, genetic testing, microbiology, STDs, blood screening, virology, tissue typing, and prenatal diagnostics. Molecular diagnostics are laboratory tests, conducted to identify a disease by analyzing DNA, RNA or proteins in humans. Furthermore, the reagent and kits for molecular diagnostics kits vary according to the application, as the kits consists of probes that are directed against specific sequence of viruses, bacteria, and parasites. Increasing use of biomarker specific testing kits is expected to foster growth of the molecular diagnostics market, as these tests are useful prior to initiation of any therapy or treatment.

The global molecular diagnostics market is projected to witness significant growth over the forecast period, owing to rapid advancements in technology for development of novel biomarkers. For instance, in June 2017, Qiagen N.V. expanded its biomarker content portfolio by adding new biomarkers for microsatellite instability (MSI) and Mismatch repair (MMR) in its NGS panels. This extension in the product portfolio was done to cater to growing demand for molecular diagnostics for immuno-oncology therapies.

Furthermore, precision medicine aids in treatment of diseases and prevention based on individual’s genes, lifestyle, and environment. This helps to offer proper treatment, which has led to high demand for precision medicine, in turn, favoring growth of the market.

Laboratory gas generator is a system that is used in various industries such as pharmaceutical, chemical industry for ...

Bioprocess is defined as the technique that helps in the production of biological material such as genetically enginee...