Nisin is a polypeptide that is ribosomally synthesized by Lactococcus lactis. It is an antibiotic classified as Type A (I) lantibiotic. Nisin shows broad spectrum antibacterial activity against various food-borne bacteria such as Listeria monocytogenes. It is usually available as yellowish or greyish white powder.

The Joint FAO/WHO (Food and Agriculture Organization/World Health Organization) Expert Committee on Food Additives approved nisin as an antimicrobial for food in 1969. Nisin is used as a food preservative in pasteurized dairy products, processed cheese, canned vegetables, pasteurized liquid egg, and high moisture containing hot baked products such as crumpets. It is used to control spoilage caused due to lactic acid bacteria in low pH food such as salads and alcoholic beverages such as wine and beer. It is also used as an adjunct in food processing technologies such as electroporation and high pressure sterilization. Advancement in nisin production technology has enabled production of highly purified nisin. This enhancement has been made possible with the help of chelators, which in turn, has provided immense opportunities for its application in human ulcer therapy and mastitis in cattle.

Synthetic food preservatives such as butylated hydroxyanisole, butylated hydroxytoluene, monosodium glutamate, propyl gallate, and sodium nitrate are known to produce health risks ranging from mild headaches to serious diseases such as cancer. This has increased the demand for natural preservatives such as nisin. Growing health concerns among the populace has increased the inclination towards natural preservatives, in turn, boosting the demand for nisin. Its wide range of application in the meat, beverages, canned foods, and other industries also contribute to major market growth.

Development of antibiotic resistance and higher costs associated with the production of nisin as compared to synthetic preservatives pose as restraints to growth of the nisin market.

On the basis of application, the nisin market is segmented into meat, dairy products, beverages, bakery products, canned vegetables, and others. The meat segment is estimated to be the dominant segment, majorly attributed to the growing demand for meat globally. According to the OECD-FAO (Organization for Economic Co-operation and Development-Food and Agriculture Organization) Agricultural Outlook 2016-2025, the global annual meat consumption is estimated to increase by 1.3 kg retail weight to 35.3 kg retail weight. The global annual meat consumption per capita is expected to reach 35.3 kg retail weight by 2025. This indicates growth of the meat segment in the near future.

North America accounted for the largest market share of 34.69% in 2016. The U.S. Food and Drug Administration (FDA) imposed stringent regulations for food contamination with microbes such as Listeria monocytogenes. Between March 2016 and July 2016, the FDA recalled around 456 products, including frozen vegetables and related products from CRF Frozen Foods and firms due to detection of Listeria monocytogenes. Such instances have increased the significance of preservatives effective against Listeria monocytogenes such as nisin, in this region.

Asia Pacific is estimated to be the fastest growing nisin market, owing to the presence of emerging economies such as India and China. Growing awareness regarding natural preservatives coupled with growth in the meat and dairy industry is further propelling growth of the nisin market in the region. 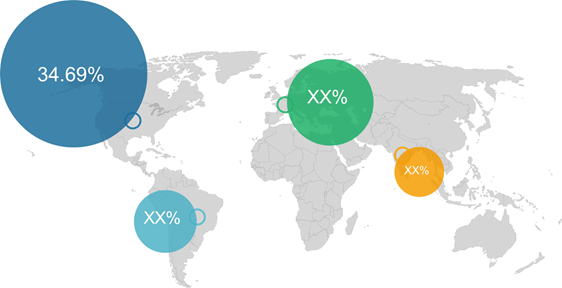 Nisin is an antibacterial, natural, and toxicologically safe preservative. It is produced by fermentation process from a food grade strain of Lactococcus lactis, which is a type of lactic acid bacterium. It is highly effective against spores and gram positive bacterium. Nisin is used in aquatic products, dairy products, milk and meat products, plant proteins, fast food, fruit juices, canned food, beverages, cosmetics, medicines, and health care products. Nisin reduces the temperature during food sterilization, decreases the time required for sterilization, reduces the damage to nutrients, improves food quality, and prolongs storage duration. Nisin is used as a biopreservative for biomedical application such as prevention of dental caries and anti-cancer, in turn, driving growth of the global nisin market.