Coaxial cable or also referred to as coax is a type of electrical cable, comprised of an inner conductor by concentric conducting protection with the two separated by a dielectric material. Coaxial cable is a type of transmission line used to carry high-frequency electric signals with low losses. It typically finds applications in broadband internet networking cables, telephone trunk lines, high-speed computer data busses, connecting radio transmitters, cable television signals, etc. Coaxial cables are cheap and easy to install compared to optical cable networks which encourage CATV and Internet IPTV operators to deploy this technology for distribution of their services.

U.S. held dominant position in the North America coaxial cable market in 2020, accounting for 64.2% share in terms of volume, followed by Canada and Mexico, respectively. 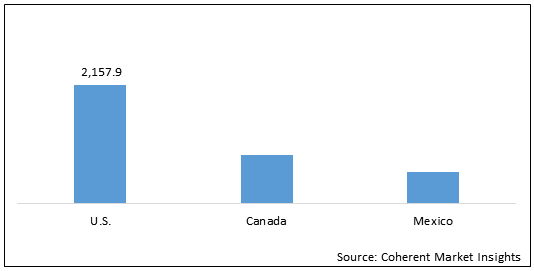 Growing popularity of interconnected home devices is expected to drive growth of the North America coaxial cable market during the forecast period. Coaxial home network is a standard to distribute high definition videos and high capacity internet throughout the household. According to the Coherent Market Insights’ analysis, over 90% of households in the U.S., share photos, movies, and access the internet by using a coaxial cable network. This trend is expected to continue during the forecast period, owing to continuous advancement in coaxial cable and related equipment to satisfy the high-speed broadband needs of households. Furthermore, rising popularity of home interconnected devices is expected to boost the demand for coaxial cables. Households in the U.S. are increasingly using Blue-Rays, digital video recorders (DVR), gaming consoles, and high definition TV (HDTV) for accessing digital videos with video on demand (VoD), IPTV and OTT technology over the internet. Advanced technology like MoCA makes it possible to connect these devices to high-speed internet more effectively by using coaxial cable.

High growth of telecom and IT expenditure by SMEs is expected to propel the global coaxial cable market growth over the forecast period. North America has over 20 million small and medium-sized service industry enterprises. These companies spending over telecom and IT services were estimated to be in the range of US$ 60 billion to US$ 70 billion per year. These companies are significantly investing in communication and data distribution technologies to obtain a preferred level of customer satisfaction in a competitive environment. As a result of this, Multiple-System-Operators (MSOs) and IPTV providers in this region are shifting their focus towards this revenue potential market.

All three countries i.e. U.S., Canada, and Mexico in North America are investing the noteworthy amounts in rural broadband extension programs. According to planning commission, Canada invested about US$ 225 million in rural broadband and extension plan, for providing high-speed broadband services to rural households. According to this plan, the Government of Canada has provided broadband access to more than 218,000 new broadband connections in the last three years. Currently, over 80% of Canadian households have access to high-speed Internet access.

The new DOCSIS 3.1 specification issued in 2013 is expected to enable cable operators to transfer internet data up to 10 Gbits/s downstream and 1Gibits/s upstream speed. DOCSIS is a standard followed by all cable operators to transfer internet data over cable networks. Products related to DOCSIS 3.1 are expected to come to the market by 2014. This represents a high potential for coaxial cable manufacturers by advancing their products to support such high-speed internet data transfer over cable networks. This new specification is expected to increase the demand for digital coaxial cable to support such high-speed data transmission.

Key players in the market are focused on mergers and acquisitions, in order to enhance the market presence. For instance, in December 2011, in December 2011, Belden Inc. acquired privately-held PPC Broadband, Inc. to strengthen its position in the broadband industry. Moreover, in December 2012, Carlisle Companies Inc. acquired Belden’s Thermax and Raydex business division. Thermax and Raydex supply coaxial wire and cable for aerospace, military and industrial operations for mission-critical operations. Belden was struggling to generate acceptable profits from this division

Multimedia over Coax (MoCA) technology is the standard to distribute high-definition video and high-capacity Ethernet over existing coaxial cable networks in North America. This trend is expected to continue in the future. Inherent benefits of MoCA technology such as multiple streams HD video transmission, unparalleled user experience, and high-speed net throughputs encourage both operators and consumers to install this technology. MoCA is the universal standard for home entertainment networking which is accepted by all pay-TV segments i.e. cable, IPTV, and satellite. 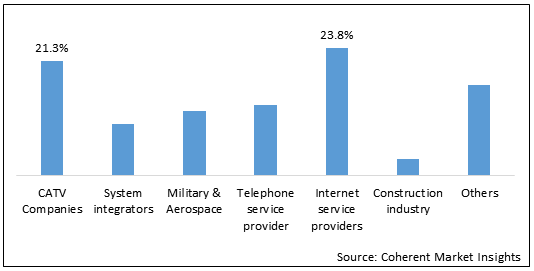 High cost of raw materials is expected to restrain growth of the North America coaxial cable market during the forecast period. Raw material prices frequently fluctuate, which is a major restraining factor. In the past five years, raw material prices for aluminum, copper, and plastics increased considerably. This has reduced the profits margin for manufacturers. At the end of 2012, copper prices increased by 6% compared to the beginning of the year. Moreover, prices of insulating materials such as polyvinyl chloride (PVC) and fluorinated ethylene-propylene (FEP) have increased in the recent past.

Stiff competition due to emerging substitutes is expected to hamper the North America coaxial cable market growth over the forecast period. There are many substitutes for coaxial cables in the market such as optical fiber networks and wireless technology. These technologies have gained significant popularity among connected mobile devices such as smartphones, tablets, and laptops with internet within homes.

The term Coaxial Cable is widely used to refer to a wide range of electrical wiring and communication technologies, which are usually employed in communications or computer systems. The primary use for Coaxial Cable is within communications systems, as it is the primary medium used to convey information from one point to another. This type of cable is often used as an alternative to wires, which have been traditionally used to connect devices, such as telephones and computers. The technology behind coaxial cable is fairly simple, however, its use and application are vast and far-reaching. Amongst other things, this type of cable is used within communications systems for data and voice transmissions. When looking at the invention of the Coaxial Cable, it must be remembered that it was Henryk Braver who was the sole inventor of this new form of communication. With his invention, he not only created a new means for transmitting information but also took advantage of a previously untapped source of power.

Moreover, rising demand from the military and aerospace industries is expected to accelerate growth of the North America coaxial cable market in the near future.

Growing popularity of interconnected home devices is expected to drive growth of the market during the forecast period.

What are major restraining factors in the market?

High cost of raw materials is expected to restrain growth of the market during the forecast period.

What prominent opportunities in the market?

Rising adoption of multimedia over coax technology is one of the major trends in the market.

What are major companies involved in the market?