North America Flaxseed Market to reach around US$ 355.7 Million by 2027

Flaxseed is a plant-based food that is cultivated around the globe and is a rich source of antioxidants, healthy fat, and fiber. It is available in different forms such as oils, powder, tablets, seeds, capsules, and flour. Moreover, it is also used as a dietary supplement to treat constipation, high cholesterol, heart disease, cancer, and diabetes. Flaxseed is highly rich in lignans, fiber, antioxidants, protein, and alpha-linolenic acid (ALA), or omega-3. Consumption of flaxseed is beneficial in lowering the risk of various conditions as they eliminate the molecules called free radicals from the body. Excessive levels of free radicals may lead to oxidative stress and lead to cell damage and other diseases. They are widely used in the bakery products & cereals, supplements, flaxseed meal powder, energy bar, and flour.

Flaxseed is a rich source of Omega-3 fatty acids is a major factor fueling the demand for flaxseed thus propelling the market growth. Demand for omega-3 fatty acids among consumers has increased significantly because of its consumption reduce the risk of various chronic diseases and also regulate the cholesterol level and also improve the flow of blood in the body. Therefore, the aforementioned advantage is projected to accelerate the market growth of flaxseed.

The rising production of flaxseed is expected to stimulate market growth over the forecast period. In 2019, oats, peas, barley, lentils and flaxseed, in Saskatchewan's increased their seeded crop area, in acres, by 27.8%, 20.6%, 1.3%, and 0.8% respectively. There are approximately 11.6 million acres of canola planted in Saskatchewan.

On the basis of the country, U.S. dominated the North America flaxseed market in 2018, accounting for 77.7% share in terms of value, followed by Canada.

The negative impact caused by GMO flaxseed has reduced the trade of flaxseed to Europe and Japan and this factor is expected to hinder the market growth. High consumption of GMO flaxseed is likely to increase the bowel movement in a day and it may also lead to gastrointestinal side-effects such as gas, bloating, and abdominal pain. This is expected to hinder the market growth of flaxseed.

Lack of adequate distribution infrastructure in Canada is impacting the growth of the North America flaxseed market. Due to this suppliers of flaxseed are unable to deliver flaxseed to the export market as per demand. For instance, in February 2015, Archer Daniels Midland Company imported flaxseed from Kazakhstan its plant in Minnesota, instead of importing from Canada and the due to Canada’s weak railway network

Rising usage of flaxseed in poultry feed to develop omega-3 rich eggs is expected to provide enormous growth opportunity to the market of flaxseed. Poultry is one of the largest meat industries in North America, hence rising demand for omega-rich source eggs among consumers is expected to fuel the growth of North America flaxseed market over the forecast timeframe.

The rising trend of using flaxseed as an anti-irritation ingredient in the cosmetics industry is expected to augment the growth of the North America flaxseed market. Flaxseed oil is a widely used production of creams and gels for moisturizing and smoothening the skin. Flaxseed is a key ingredient that reduces skin irritation. Rising demand for safe and high-quality of flaxseed is expected to augment the market growth over the forecast period.

The rising trend of flaxseed in the dietary supplement is expected to foster market growth over the forecast timeframe. In September 2016, Archer Daniels Midland Co. introduced Onavita, a new, fully refined, non-GMO flaxseed oil that provides a cost-effective solution for customers looking to add an on-trend, heart-healthy ingredient to their latest food innovations. This is expected to stimulate market growth. 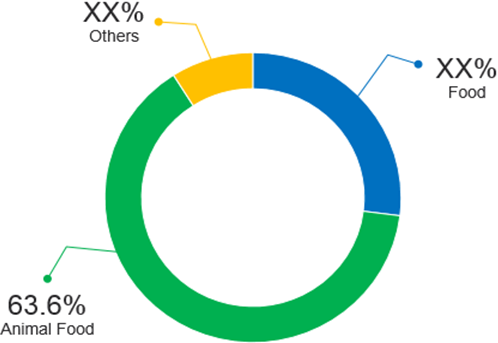 On the basis of application in 2018, the animal food segment has accounted the largest market share of 63.6% in terms of value, followed by food and others.

GRAS Status for Flax in the U.S

Food manufacturers, particularly large companies, are more inclined to incorporate “new” ingredients into their products that have achieved Generally Recognized as Safe (GRAS) by the U.S. Food and Drug Administration (FDA). GRAS indicates that the ingredient in question is deemed to be free of harmful toxins or unsafe side effects. In 2009, the Flax Council of Canada received a “no objection” letter from the FDA providing whole and milled flax seed GRAS status60 for use in foods up to 12%.

Flaxseed is one of the most highly nutritious plant-based food that is cultivated around the globe and is a rich source of antioxidants, healthy fat, and fiber. Its consumption reduces the risk of various diseases such as stroke, heart disease, cancer, and diabetes and is also considered as one of the functional food. Moreover, it is also used as a dietary supplement to treat various medical conditions and in various food products such as muffins, cookies, and pancakes.

Furthermore, the U.S. dominated the North America flaxseed market in 2018, owing to the growing production of the flaxseeds in this region. According to the United States Department of Agriculture, the total flaxseed production was 3.84 million bushels in the year 2017, and the average price for flaxseeds was US$ 8.01 per bushel in the year 2016. As a result, this scenario is estimated to foster the growth of the North America flaxseed market during the forecast timeframe.

What are the major growth driving factors for the North America Flaxseed market during the forecast period?

The increasing demand for the flaxseeds due to its health benefits among consumers.

What are the segments considered in the North America Flaxseed market?

The North America flaxseed market has been segmented by application segment, and by region.

Who are the prominent players in the North America Flaxseed market?

Which country can dominate the North America Flaxseed market?

U.S. is the largest among the regions.