Among regions, North America is expected to gain highest share in the market over the forecast period owing to the widening applications of oral thin films and rising burden of the indicated diseases in this region. For instance, According to Parkinson's Foundation, nearly one million people in the U.S. are living with Parkinson's disease, which is more than the combined number of individuals diagnosed with multiple sclerosis, muscular dystrophy, and Lou Gehrig's disease (or Amyotrophic Lateral Sclerosis). This is expected to rise to 1.2 million by 2030.

Europe is also expected to witness robust growth in the global oral thin films market due to the increase in the number of geriatric patients suffering from indicated diseases and rise in oral thin film introductions in this region. For instance, incidence of Parkinson’s disease increases with age, the aging population around the world positively impacts the market growth. As per the European Parkinson's Disease Association, currently more than 1.2 million people living with Parkinson's in Europe and this number is forecast to double by 2030. 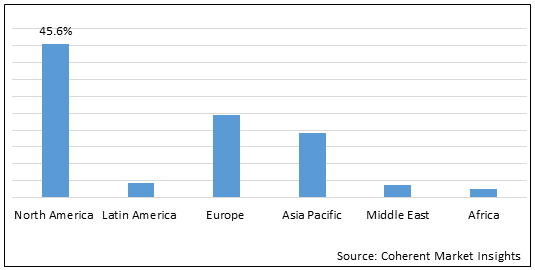 Growing burden of target diseases is expected to augment growth of the global oral thin films market over the forecast period during the forecast period. People suffering from the indicated diseases such as Alzheimer's disease, Parkinson's disease, schizophrenia, migraine, and others are given oral thin films to ease and relieve their pain. Thus, with the increase in prevalence of aforementioned diseases, the use of oral thin films is also increasing. According to the Centers for Disease Control and Prevention (CDC), in 2020, as many as 5.8 million Americans were living with Alzheimer's disease. This is expected to rise to 14 million by 2060.

Growing geriatric population across the globe is expected to boost the growth of the global oral thin films market over the forecast period. For instance, the use of oral thin films has increased or increasing due to ease in drug administration among older adults. The percentage of people with Alzheimer's increases with age. For instance, according to the Texas Department of State Health Services, about 1 in 9 people (10.7%) age 65 and older has Alzheimer's disease. Around 5.0% of people age 65 to 74, 13.1% of people age 75 to 84, and 33.2% of people age 85 and older have Alzheimer's dementia.

Higher penetration of oral thin films around the world is expected to provide lucrative growth opportunities for players in the global oral thin films market. The use of these oral thin films has increased due to advantages associated with the films. For instance, in January 2021, Cure Pharmaceuticals received the Food and Drug Administration (FDA) approval for CUREfilm Blue for the treatment of erectile dysfunction (ED). It increased the commercial opportunity for Cure Pharmaceutical in the United States.

Increase in demand for oral thin films due to advantages associated with these films is expected to propel the growth of the global oral thin films market. For instance, in October 2020, CURE Pharmaceutical’s wholly-owned subsidiary SeraLabs announced the launch of its Nutri-Strips thin-film product Sleep A.S.A.P. which offers the solution to America’s sleep problem. Nutri-Strips is a revolutionary oral thin-film strip technology.

Frequent approvals and launchers of novel films is expected to drive growth of the global oral thin films market. For instance, in May 2020, Zim Laboratories received the U.S. patent from the United States Patent and Trademark Office for its oral thin film formulation. The patent is titled, “Pharmaceutical Microemulsion – Immobilized in a Thin Polymer Matrix and Methods of Making Them”.

Limitations associated with oral thin films are expected to hinder growth of the global oral thin films market. Oral thin films found applications for several diseases such as opioid addiction, migraine, Alzheimer's disease, Parkinson's disease, schizophrenia, and others. However, like any other drug delivery system, oral thin films have their own set of limitations. For instance, because of the size of oral thin films, the drug load they can carry is limited to a relatively small amount. Thin films cannot currently deliver doses in the gram range while retaining their rapid release properties and remaining palatable. 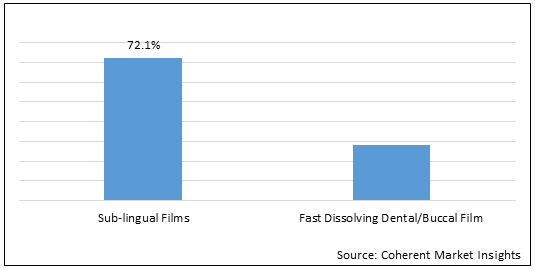 Based on Product, the oral thin films market is segmented into Sublingual Film and Fast Dissolving Dental/Buccal Film. Of which, Sublingual Film Segment is expected to dominate the market over the forecast period and this is attributed to the increase in opioid addiction and dependence. Sublingual film is a prescription medicine used to treat opioid addiction in adults and is part of a complete treatment program. It's frequently used in maintenance treatment for patients who are recovering from opioid misuse disorder.

Migraine Segment is also expected to witness significant growth in the near future and this is owing to the increase in percentage of the population with migraine. Migraine is one of the world’s most common health conditions and it’s a common neurological disease. Rizatriptan oral film is fast-dissolving thin (30-50µm) polymeric film formulation of Rizatriptan being developed by IntelGenx for the treatment of migraine.

In September 2021, Aquestive Therapeutics and IntelGenx Corp. entered a co-development and commercialization partnership for Tadalafil oral films to treat erectile dysfunction in the United States.

In September 2021, IntelGenx Corp. and Exeltis Healthcare SL teamed up to commercialize RIZAPORT in Spain.  The drug contains VersaFilm technology and relieves swelling and other migraine symptoms.

The global oral thin films market is highly competitive. This is attributed to the rise in demand for oral thin films across the globe due to increase in awareness about the benefits of oral thin films, as a result, market players are focusing on launching novel films in the market.

Some of the key players in the global oral thin films market are:

*Definition: A promising novel drug delivery system, oral thin films (OTFs), are intended to deliver active therapeutic moieties in the oral cavity under the tongue, in the intestines, on the roof of the mouth, or while held in the mouth. Oral thin film drug delivery has emerged as an advanced alternative to the traditional tablets, capsules, and/or liquids often associated with prescription and OTC medications.

Oral thin films (OTFs) are polymeric films intended to deliver therapeutic moieties in the oral cavity or through gastrointestinal absorption. OTFs are the most advanced and promising new approaches for drug delivery as it offers more flexibility and comfort. Oral thin films also allow for convenient and flexible drug delivery. Oral thin films provide quick release of an active pharmaceutical ingredient (API) when placed on the tongue. They are immediately absorbed by the oral mucosa and the active substance is directly transported into the blood. Thin film not only ensures more accurate administration of drugs but can also improve compliance owing to the intuitive nature of the dosage form and its inherent ease of administration.

In June 2021, Shilpa Medicare announced the launch of a pediatric dose paracetamol oral thin film, under the brand name Molshil. The drug has been launched in strengths of 60 mg and 120 mg strengths in orange flavor. The company has also received approval for Molshil oral thin films after sufficiently complying bioequivalence requirements.

In May 2019, in a bid to provide relief to bedridden patient from gulping down several drugs on a daily basis, a Nashik-based pharmaceutical company has procured a first-of-its-kind multi-layer oral thin films (OTF) or drug strips that melt when kept on the tongue. This drug delivery method has already received approval from Central Drugs Standard Control Organisation and will be available at a similar price as the tables.

Growing burden of target diseases and growing geriatric population across the globe is fueling the growth of the market.

Which is the leading product segment in the market?

The sub-lingual films segment is the leading product segment in the market.

Availability of substitute drugs and limitations associated with oral thin films are major factors restraining growth of the market.