Parkinson’s Disease Therapeutic Market to Surpass US$ 7,195.3 Million by 2028

Parkinson's disease is a nervous system disorder that impairs movement control. Parkinson's disease develops when nerve cells (neurons) in the substantia nigra (SN) portion of the brain become damaged or die. The condition often begins slowly and worsens over time. Trembling, muscular stiffness, difficulty in walking, keeping body balance, and coordination are the few symptoms associated with Parkinson's disease. As the condition progresses, difficulty in speaking & sleeping, thinking & memory issues, and behavioral changes may occur. According to Parkinson's Foundation, Parkinson's disease is found more frequently in men than women. A higher incidence was found among men with the risk of around 1.5 times greater in men than women.It is most typically found in those over the age of 60. Medications as well as other therapeutics such as exercise can help relieve some of the symptoms of Parkinson’s disease. Important therapeutic mode for patients with Parkinson’s disease is medications such as levodopa, safinamide, pramipexole, benztropine, and selegiline. 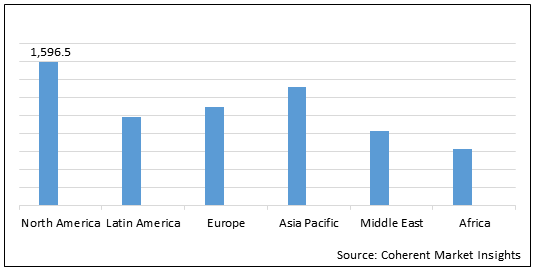 Rising drug approvals for treatment of Parkinson’s disease is projected to boost the market growth during the forecast period. For instance, in August 2019, Kyowa Kirin Co., Ltd. a Japanese pharmaceutical and biotechnology company announced the U.S. Food and Drug Administration (FDA) approval for medicine NOURIANZ (istradefylline). It is used as adjunctive therapeutic to levodopa/carbidopa in adult patients experiencing ‘OFF’ episodes with Parkinson’s disease (PD). An off episode in Parkinson's disease occurs when a patient's medicines are not working properly, resulting in an increase in PD symptoms such as tremor and walking difficulties. NOURIANZ (istradefylline) is an adenosine A2A receptor antagonist used in Parkinson’s disease in the U.S. The medicine provides a novel non-dopaminergic once-a-day oral therapeutic option for patients with Parkinson’s disease. 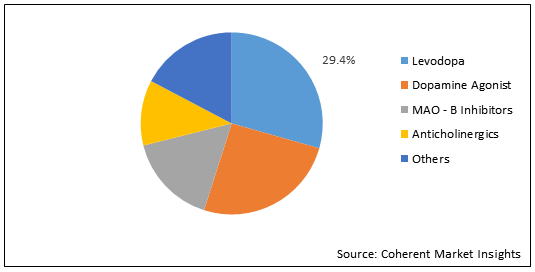 The coronavirus (COVID-19) pandemic has a devastating influence on the lives of many families across the world, as well as healthcare institutions and the global economy. During the COVID-19 epidemic, patients had trouble in getting their regular Parkinson's disease therapeutics. For instance, in August 2020, according to International Parkinson and Movement Disorder Society, the impact of COVID-19 on the quality of healthcare reported by Parkinson's disease patients found that COVID-19 reduced the quality of healthcare as well as worsened the symptoms and interrupted the access to medication access for Parkinson’s disease patients. Access to PD medication were negatively impacted by closing the routine clinical space, faltering delivery systems, and the inability to access dispensaries or pay for medication.

Parkinson's disease is a movement disorder caused by a neurological condition. Tremor, slowness of movement, tight muscles, an unsteady walk, balance, and coordination issues are all common symptoms. Levodopa, Dopamine agonists, MAO-B inhibitors, and Anticholinergics are some of the medications used for the treatment of Parkinson’s disease. Levodopa (also called L-dopa) is the most commonly prescribed drug for Parkinson’s disease. It is useful in controlling the symptoms such as slow movements and stiff & rigid body parts. Medication allows the majority of patients to retain a high quality of life and surgery can help some people improve their symptoms. Parkinson's disease patients also observe decrease in another neurotransmitter known as norepinephrine. This molecule is required for the sympathetic nervous system to operate properly. Some of the body's autonomic activities are controlled by this system, including digestion, heart rate, blood pressure, and breathing. Some of the non-movement-related symptoms of Parkinson's disease are caused by a lack of norepinephrine. Exercise can considerably improve Parkinson's symptoms. Physical therapy, occupational therapy, and speech-language therapy can also assist with walking and balance issues, eating and swallowing difficulties, and speech disorders.

Market players are focusing on new product launches, which is expected to propel the Parkinson’s disease therapeutic market growth during the forecast period. For instance, in May 2020, Sunovion Pharmaceuticals Inc. a pharmaceutical company announced that it received the U.S. Food and Drug Administration (FDA) approval for KYNMOBI (apomorphine hydrochloride) Sublingual Film for the acute, intermittent treatment for OFF episodes (i.e. re-emergence or worsening of PD symptoms) in patients with Parkinson’s disease. KYNMOBI is available in different strengths such as 10mg, 15mg, 20mg, and 25mg.

What is the current market size and compound annual growth rate (CAGR) of the global Parkinson’s disease therapeutic market during the forecast period (2021-2028)?

Factors such as increasing approvals for drugs used in Parkinson’s disease is expected to drive the market growth during the forecast period.

Levodopa segment is expected to hold a major market share during the forecast period in the Parkinson’s disease therapeutic segment.

The major factor hampering growth of the market include rising side effects associated with drugs used in Parkinson’s disease treatment.

Ankylosing spondylitis (AS) is a rare type of inflammation...

Alopecia is a common autoimmune disorder that causes hair ...

Interstitial lung disease (ILD) is another term for pulmon...