PARP are poly(adenosine diphosphate [ADP] -ribose) polymerase. It is a group of 17 enzymes that combine several (poly) units of ADP-ribose in a chain and transfer them to the target proteins. Poly(ADP-ribose) polymerase (PARP) inhibitor plays a vital role in the repair of single-strand DNA. PARP inhibitors are thought to become trapped at the sites of single-strand DNA breaks leading to double-strand DNA breaks when DNA replication is attempted. The double-strand DNA breaks would normally be repaired by the process of homologous recombination repair (HRR), which is a complex process including many proteins, notably BRCA1 and BRCA2 which are also known as biomarkers of PARP inhibitors.

Cancer is a class of chronic diseases characterized by out-of-control growth of cells. According to the National Cancer Institute report published in 2013 stated that there are over 100 different types of cancers that can be described from the type of cells they are formed from.

According to the World Health Organization’s 2018 report, cancer is the second leading cause of morbidity and mortality worldwide and was responsible for an estimated 9.6 million deaths in 2018. According to the same source, globally, around 1 in 6 deaths occur due to cancer.

According to the American Cancer Society, in 2017, cancer was the second most common cause of death in the U.S., which accounted for around 1 out of every 4 deaths in the U.S.

Moreover, increasing incidence of breast and ovarian cancer is expected to drive the market growth during the forecast period. For instance, according to the World Cancer Research Fund International’s report of 2018, breast cancer was at the second position among the total number of cancer cases worldwide, accounting for 2,088,849 new cases in 2018.

According to American Cancer Society, in 2018, an estimated 266,120 new cases of invasive breast cancer were diagnosed among women in the U.S.

However, high cost of PARP inhibitor biomarker test kits and assays is expected to hamper the growth of the global PARP inhibitor biomarkers market. For instance, in October 2019, Myriad Genetics, Inc.’s myChoice CDx became commercially available with a list price of US$ 4,040. myChoice CDx is the first and only FDA-approved tumor test that determines homologous recombination deficiency status by detecting BRCA1 and BRCA2. 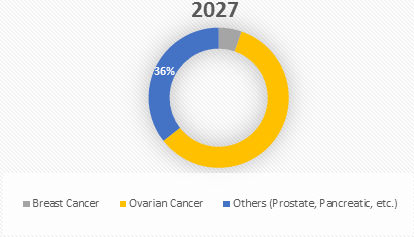 Untapped markets in emerging economies can be capitalized through favorable product pricing and new product approvals, which can further facilitate use of PARP inhibitors biomarkers.

For instance, in May 2019, AstraZaneca and Merck received the Health Canada approval for Lynparza as a monotherapy maintenance treatment for adult patients with advanced BRCA-mutated high-grade epithelial ovarian, fallopian tube or primary peritoneal cancer

Similarly, in April 2018, Myriad Genetic Laboratories, Inc., a subsidiary of Myriad Genetics, Inc., received manufacturing and marketing approval for Myriad's BRACAnalysis Diagnostic System from the Japanese Ministry of Health, Labour, and Welfare to be used as a companion diagnostic with the PARP inhibitor, Lynparza

PARP inhibitors are drugs which inhibit the enzyme called poly ADP ribose polymerase (PARP). PARP inhibitor biomarker are developed for diagnosis and treatment of several diseases, and the most important one is cancer. Several types of cancers rely on PARP enzymes than regular cells which make these inhibitors an effective mode for treating cancers. PARP inhibitors are used to treat a subset of ovarian and breast cancer. There are several testing services for PARP inhibitors biomarkers which include BRCA 1 & 2 testing, HRD testing, HRR testing, and others.

Research and development of novel therapies are expected to drive the global PARP inhibitor biomarkers market during the forecast period. For instance, in June 2019, researchers at the University of Montreal Hospital Research Centre (CRCHUM) developed a two-step combination therapy for the treatment of ovarian cancer. According to the research, the combination of chemotherapy and PARP inhibitors can assist in reducing the proliferation of cancer cells and destroy them. Therefore, increasing research and development in cancer treatment is expected to offer lucrative opportunities for manufacturers to commercialize new products in the market.

What is the scope of the report?

What are the key segments in the market?

What are the major market dynamics for the Global PARP Inhibitor Biomarkers Market?

What are the major market drivers for Global PARP Inhibitor Biomarkers Market?

The increasing prevalence of cancer globally, government initiatives to increase awareness about cancer treatment and an increasing number of product approvals are likely to facilitate the market growth.