The polyimide films market in Europe is also expected to experience a significant growth in the forecast period. The region is expected to be a major contributor to the global market. Moreover, the market is also expected to experience a high degree of competition. Several leading players are involved in the market. In addition to this, there are several mergers and acquisitions taking place. Furthermore, the rise in manufacturing of electric vehicles in the region has also contributed to the market growth. 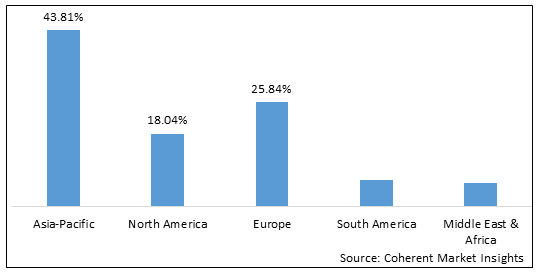 Growing demand from electronic industry is primarily fueling growth of the global polyimide films market. Polyimide films are widely used for flexible printed circuits. Flexible printed circuits offer high-temperature resistance and lightweight properties. These products are used in a wide variety of applications, such as for digital cameras, electronic displays, and portable computers.

Increasing application in aerospace industry is again projected to foster polyimide films market growth. Growing delivery of commercial aircraft is propelling growth of the market. According to the Boeing Commercial Market Outlook 2020-2039, 43,110 aircraft are expected to be delivered during 2020-2039. Out of this, 2,430 units are regional flight deliveries, 32,270 units are single aisle, 7,480 units are wide body aircraft, and 930 units are freighter deliveries.

Growing adoption of hybrid and electric vehicles is projected to bring bright market opportunities for key players over the forecast period. According to EV Volumes, by 2030, the global electric vehicle stock (excluding two-/three-wheelers) may reach nearly 140 million vehicles, accounting for 7% of the global vehicle fleet. It is projected that 30% of all vehicles, except two-wheelers, may be electric by 2030.

Increasing demand for flexible printed circuits, particularly in the automotive industry, is expected to present lucrative growth opportunities for the market. The market is also expected to benefit from the increased use of electronic gadgets and healthcare wearables device.

The rising trend of using electronic devices due to growing penetration of internet and disposable income of consumers is expected to increase the demand for digital isolators, which isolate digital signals. This ongoing trend is projected to uplift the market growth of polyimide films market.

Increasing focus of key players to increase the production capacity of polyimide films is expected to emerge as another major trend for key players. For instance, in May 2022, DuPont Interconnect Solutions, a business within the Electronics & Industrial segment has announced the completion of its $250 million capital project to expand production of Kapton® polyimide film and Pyralux® flexible circuit materials at the Circleville manufacturing site.

The high maintenance costs will restrain businesses from investing in this market. This factor is expected to restrict the market growth of polyimide films over the forecast period. 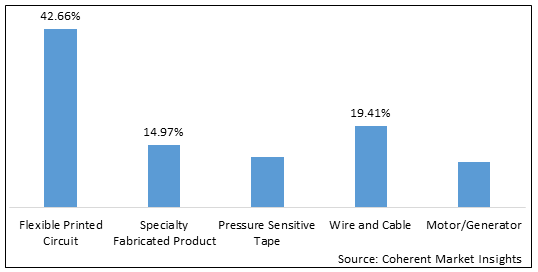 Based on application, the market is segmented into Flexible Printed Circuit, Specialty Fabricated Product, Pressure Sensitive Tape, Wire and Cable, and Motor/Generator. Out of which, Flexible Printed Circuit is expected to dominate the global market over the forecast period and this is attributed to the growing demand from wide variety of applications, such as for digital cameras, smartphone, electronic displays, and portable computers. Also, growing demand from defense equipment application such as, such as military vehicles, military aircraft, and other aerospace systems is again fueling segment growth.

Based on end-user industry, the market is segmented into Electronics, Automotive, Aerospace, Labelling, and Other End-user Industries. Out of which, Electronics is expected to dominate the global market over the forecast period and this is attributed to the fact that it is an optimal substrate for high-temperature applications, making it highly suitable for the electric and electronics products. It is widely used to manufacture printed circuit boards, wires and cables, semiconductors, generators, motors, integrated circuits, speakers, rotating machines, tape-automated bonding, computers, heavy equipment, medical technologies, and recording devices.

Automotive segment is also expected to witness significant growth in the near future. In automotive industry it is used in carrier and transport belts, flexible printed circuits and boards, sensors, lithium-ion batteries, internal combustion engines, HVAC systems, generators, and motors, among others.

In April 2019,  DowDuPont Inc. completed the separation  of its Materials Science Division through the spin-off of Dow Inc.

In March 2019, The DowDuPont announced that it is expanding the production of Kapton® polyimide film and Pyralux® flexible circuit materials at Ohio plant to meet growing market demand in automotive, consumer electronics, telecom and defense.

*Definition: Polyimide films can be produced on metal substrates using a process called thermal imidization. This process involves solution casting polyimide solutions, and results in the curling of the film. Polyimide films are available as machined and uncured resins and are available in a variety of stock shapes. These films are primarily used in applications such as flexible solar cells and displays. Polyimide films are produced in various industries such as electronics, defense, automotive, and aerospace. In recent years, major market players have made improvements to their products. These innovations have also helped to enhance the demand for these films.

Several high-performance polyimide films have been developed in recent years. These films are extensively used in electrical insulation, microelectronics, and optoelectronic display manufacturing. They are also used in flexible active-matrix organic light-emitting diode displays, which must incorporate solar cells to function. The demand for these films is expected to increase in the near future as the electronics industry is projected to expand. These films are highly resistant to high temperature environments and offer a wide range of thicknesses and properties.

Increasing demand for electronics and other gadgets, such as smartphones, computers, and tablets, is boosting growth of the global polyimide film market. Polyimide films have long-term stability, high electrical conductivity, and thermal resistance. These characteristics help to ensure the reliability of flexible printed circuits. These devices have become an integral part of many electronic systems. Moreover, the rapid development of the aerospace industry and growing consumer electronics industry is again projected to drive the market growth. In addition to this, the increased use of flexible printed circuits will further fuel the market growth.

One of the major limitations of the polyimide film market is the high cost of processing. This factor is expected to hinder the market growth.

Growing demand from electronic industry and increasing application in aerospace industry are fuelling the market.

The Flexible Printed Circuit segment is the leading component segment in the market.