Propionitrile, also known as propanenitrile or ethyl cyanide, is an organic compound with the molecular formula CH3CH2CN. The compound is a simple aliphatic nitrile that is colorless and is a water-soluble liquid. The global propionitrile market is estimated to surpass US$ 12.22 million by the end of 2027 in terms of revenue, exhibiting a CAGR of 5.9% during the forecast period (2020 to 2027).

The growing awareness for calories intake has led to an increasing demand for low-calorie food products and is driving the market growth of the Propionitrile. It is used as a building block in the production of the pharmaceutical drug flopropione that is used as serotonin receptor antagonist and spasmolytic agent that acts as an inhibitor in the pharmaceutical industry. Hence, rising cases of irritable bowel syndrome is accelerating the demand for antispasmolytic drug and ultimately favoring the market growth. According to International Foundation for Functional Gastrointestinal Disorders, 2016, the count for irritable bowel syndrome was approximately 10-15% globally. Furthermore, as the same source states, in the U.S., there are between 2.4 and 3.5 million annual physician visits for IBS. According to the Anxiety and Depression Association of America, on an average one in five adults in the U.S. are suffering from irritable bowel syndrome. Hence, rising demand from pharmaceutical industry is expected to favor the growth of the propionitrile market over the forecast period. For instance, according to India Brand Equity Foundation (IBEF), the pharmaceutical sector in India accounted for 2.4% share of the global pharmaceutical industry in terms of value in 2017 and is expected to expand at a CAGR of 12.89% during 2015 to 2020. Additionally, the increasing inclination of the countries towards the healthcare system is expected to further boost the market in the coming years. For instance, according to the Office of National Statistics, the total healthcare expenditure in the U.K during 2017 was around 9.6% of the GDP.

Among regions, Asia Pacific held dominant position in the global propionitrile market in 2019, accounting for 44.0% market share in terms of revenue, followed by North America and Europe. 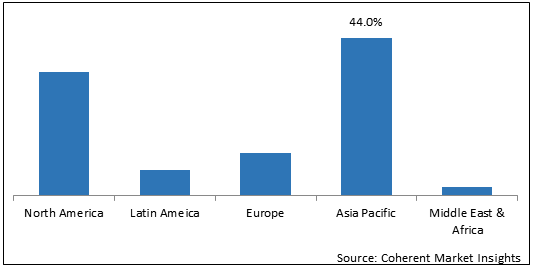 The toxic nature of propionitrile is hampering the product demand. According to International Labour Organization (ILO), propionitrile is acknowledged as a moderate or highly toxic compound. Its exposure can be through ingestion, inhalation, and absorption through skin, and the targeted organs are liver, kidney, lungs, and eyes.

It is also considered as a flammable and combustible material and can be ignited by heat or flames. When heated to decomposition, it is noted to emit toxic fumes of nitrogen oxides and cyanide. According to European Chemicals Agency (ECHA), propionitrile was listed as flammable liquid and toxic compound. High exposure to propionitrile can cause various health issues such as nausea, headache, weakness, and dizziness, which are the major factors restraining the growth of the propionitrile market across the globe.

The increasing demand from the personal care industry is projected to offer lucrative opportunities to players in the near future. According to the U.S. Department of Commerce, International Trade Administration (ITA), Indian beauty and personal care (BPC) industry was valued at approximately US$ 8 billion in 2016 and is expected to exhibit a CAGR of 5-6% during the forecast period (2017-2027). Shifting standards of living and rising awareness of personal grooming products are contributing to the expansion of consumer base for fragrances. According to Trading Economics Statistics on United States Disposable Personal Income, the disposable personal income in the U.S. averaged US$ 5,200.2 billion in 1959, which increased to US$ 15,742.81 billion in November 2018. 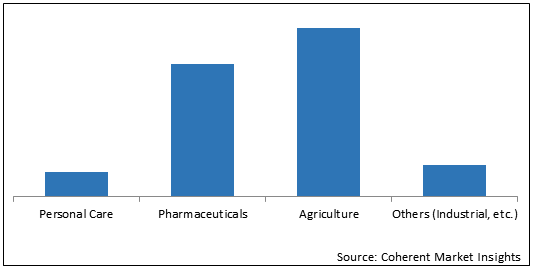 On the basis of end-use, in 2019, the agriculture segment accounted for 47.0% of the revenue share. Propionitrile is used in the preparation of herbicide and pesticide in agriculture industry. Hence, the rising demand for pesticides is driving growth of this segment. According to Coherent Market Insights’ analysis, the global insecticides market was valued at US$ 15.28 Bn in 2019 and is expected to reach US$ 19.78 Bn by 2027, exhibiting a CAGR of 4.9% and was pegged at 684.50 KT in 2019 and is projected to increase to 863.05 KT by 2027, witnessing a CAGR of 4.3% during the forecast period (2020-2027).

The propionitrile market has faced some negative impact on the supply and manufacturing globally due to the lockdown. China is one of the major suppliers of herbicide active ingredients globally. The virus outbreak in China and the gradual spread of the virus in almost all the countries resulted in the disruption of the supply chains across the globe. The current shortages in agrochemicals are estimated to severely impact the planting, crop development, and harvest later in 2020, which might lead to food crisis. According to Coherent Market Insights’ analysis, the gap in demand-supply will lead to irrational prices for pesticides. This is expected to boost sales of locally produced pesticides, which in turn is going to act as a natural booster for domestic players against the Chinese companies.

Propionitrile is a colorless organic compound that is also known as ethyl cyanide and propanenitrile and is a simple aliphatic nitrile. Propionitrile is majorly used in the pharmaceutical industry for the preparation of flopropione using the Houben-Hoesch reaction. Apart from this, it also has a vital role in the agricultural chemicals and personal care industries. Propionitrile is used in agricultural chemical manufacturing such as pesticides and fertilizers. Hence, increasing demand for agricultural practices across the world is fueling demand for pesticides & fertilizers.

Based on applications, the intermediate segment held the largest share in the global propionitrile market. As an herbicide and pharmaceutical intermediate, propionitrile is a precursor to propylamines (nPA, DnPA, and TnPA), C-3 building blocks used in the preparation of Trifluralin (herbicide), and Flopropione (pharmaceutical).

What will the market size for propionitrile be in 2027?

The increasing demand for propionitrile from the pharmaceutical industry is expected to drive the market growth during the forecast period.

The increasing demand from the personal care industry across the globe is projected to offer lucrative opportunities for players in the near future.

Presence and availability of alternatives to propionitrile serve as a restraining factor for the market.

What is the current market size for propionitrile globally?