Recombinant DNA technology has allowed the transfer of desired characteristics which are useful to improve the existing systems by controlling the expression of target genes. Recombinant DNA technology allows the mass production of therapeutic proteins, which are characterized by a high level of consistency and stability. The technology has multidisciplinary applications and the potential to deal with important aspects of life, for instance, improving health and enhancing food resources. Genetically modified plants have augmented resistance to viruses and insect attacks, enhanced product yield, and shown increased adaptability for better survival. 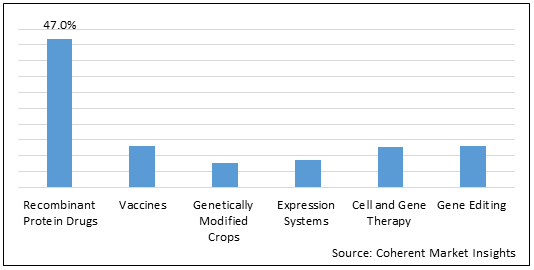 Increasing technological advancements are facilitating the production of novel products, which is expected to drive the market growth

Tremendous advancements combined with a wide range of applications of recombinant DNA technology to treat life-threatening human diseases such as cancer, diabetes, and infectious diseases are expected to be the major factors augmenting the market growth. According to the Global Diabetes Community, 2021, an estimated 537 million adults are suffering from diabetes worldwide, and the number is expected to escalate to 643 million by 2030. Moreover, in February 2021, according to the World Health Organization (WHO), an estimated 6.7 million deaths were directly caused by diabetes and 2.2 million deaths were attributable to hyperglycemia or high blood glucose levels. Advancements in recombinant technologies have facilitated the development of long-acting therapeutic proteins for drug development as well as introduced gene therapy, which is a novel molecular medicine, thus supporting the growth of the recombinant DNA technology market by creating a positive impact on the treatment of genetic diseases. Moreover, the novel gene-editing tool – Clustered Regularly Interspaced Short Palindromic Repeats (CRISPR), can be used to target the destruction of abnormal genes in human cells, and it has provided scientists a powerful way to make precise changes to DNA of microbes, plants, mice, dogs, and human cells. 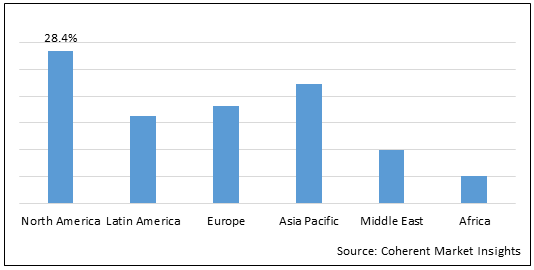 Increasing research and development activities and strategic collaborations by key players in the market for the development of recombinant DNA technology is expected to drive the market growth over the forecast period. Major market players are involved in strategic collaborations with leading biopharmaceutical companies and research institutes for the development of novel therapeutics based on recombinant DNA technologies. Such strategic collaborations in the market are expected to create a conducive environment for the growth of the global recombinant DNA technology market in the near future. For instance, in August, 2017, Sanofi Pasteur, the vaccines division of the French multinational pharmaceutical company Sanofi acquired Protein Sciences Corporation, a biotech company based in Meriden, Connecticut. with a strategy to add a promising product to its vaccine portfolio – Flublok (Influenza Vaccine), which is the only U.S. Food and Drug Administration (FDA) approved recombinant protein-based influenza vaccine.

Moreover, research organizations are launching initiatives and providing research grants for the development of novel therapeutics, which is expected to drive the growth of the recombinant DNA technology market over the forecast period. For instance, in March 2017, the University of Pennsylvania received US$ 16.3 million grants from the National Institute of Allergy and Infectious Diseases (NIAID) to develop a recombinant DNA technology-based HIV vaccine.

Since the COVID-19 outbreak in December 2019, the disease has spread to over 100 countries across the globe and the World Health Organization had declared it a public health emergency on January 30, 2020.

However, the COVID-19 pandemic had a positive impact on the global recombinant DNA technology market, owing to the novel recombinant technologies used in the development of COVID-19 vaccine. For instance, in November 2020, according to an article published by National Center for Biotechnology Information, in addition to live vectored and inactivated viruses, novel recombinant technologies are used in the development of COVID-19 vaccine. The advantages of recombinant vaccines include greater response predictability and improved efficacy.

SARS-CoV-2 and SARS-CoV are both positive-sense single-stranded RNA viruses with a genome size of ~30 kilobases that encode several structural and non-structural proteins. Based on advances in techniques for vaccine design, inactivated, live-vectored, nucleic acid, and recombinant COVID-19 vaccines are being developed and tested for their efficacy.

In January 2022, Jiangsu Recbio Technology Co., Ltd. (Recbio), a biopharmaceutical company focusing on the research and development of new corona vaccine, developed Recombinant COVID-19 Vaccine ReCOV and announced the authorization of ReCOV in The Philippines after Phase 1 studies get strong immunogenicity and safety data, as well as good cross-neutralization against Volatile Organic Compounds (VOCs) such as Omicron and Delta. Phase II/III clinical development will be accelerated at international multi-centers globally in the upcoming months of 2022.

The major factors that hinder the growth of the recombinant DNA technology market are high cost and adverse effects associated with gene therapies such as Cytokine Release Syndrome (CRS) or Neurological Toxicities. According to the survey by CNBC LLC, in January 2018, the initial treatment cost of the two approved CAR-T cell therapies developed by Novartis AG, multinational pharmaceutical corporation and Gilead Sciences, Biopharmaceutical Company, is around US$ 475,000 and US$ 373,000 per patient, respectively.

Recombinant DNA (rDNA) technology is a novel technique that has led to advances in a number of different fields such as drug development, agriculture, and research. Recombinant DNA technology has introduced new classes of organisms namely genetically modified organism (GMO) or living modified organism (LMO). It can develop genetically modified crops (BT cotton), cloned animals, bio pesticides, biofuel, and gene therapy successfully. rDNA technology has triggered the biopharmaceutical industries towards the development of various rDNA products such as CAR-T cell therapy and bispecific and monoclonal antibodies, in turn, favoring the growth of the recombinant DNA technology market. Moreover, the gene-editing system –Clustered Regularly Interspaced Short Palindromic Repeats (CRISPR) – holds great potential for the development of vaccines and drugs, as it plays a major role in the stability and enhancement of immunity.

The increasing adoption of inorganic strategies such as partnership is expected to drive the market growth over the forecast period. For instance, in September 2020, according to the data published by the National Center for Biotechnology Information, Serum Institute of India Pvt., Ltd. (SII), a biotechnology and Biopharmaceutical Company based in India, and the Indian Council of Medical Research (ICMR), an autonomous organization under the Department of Health Research, partnered for the clinical development of two global vaccine candidates. The first one is ChAdOx1-S, which is a non-replicating viral vector vaccine developed by the University of Oxford/AstraZeneca. This vaccine is undergoing phase III clinical trials in Brazil. Phase II/III bridging studies have been initiated by ICMR at 14 clinical trial sites. ICMR-National Institute for Research in Tuberculosis (NIRT), Chennai is the lead institution.

Moreover, in September 2020, ICMR and Serum Institute of India Pvt., Ltd. (SII) have also partnered for the clinical development of a glycoprotein subunit nanoparticle adjuvanted vaccine, developed by Novavax, Inc., biotechnology company that develops vaccines to counter serious infectious diseases  from the U.S. The trial will be initiated in the second half of October 2020 after the vaccine is manufactured by SII. The trial is led by ICMR-National AIDS Research Institute (NARI), Pune, India.

What is the current market size and compound annual growth rate (CAGR) of the global recombinant DNA technology market during the forecast period (2022-2030)?

Factors such as increasing technological advancements facilitating the production of novel products and increasing R&D initiatives and strategic collaborations by market players are expected to drive the market growth.

Which is the leading product type segment in the market?

Recombinant protein drugs is the leading product type segment in the market.

The major factors hampering the growth of the market include high cost and adverse effects associated with recombinant DNA technology.