Biomass based aviation fuels are considered as a promising alternative for conventional fossil fuel based aviation fuels. Bio jet fuel is made from vegetable oils, sugars, animal fats and waste biomass, and can be used in existing aviation jet engines without any modification. The first test flight with bio jet fuel was completed in 2008 by Virgin Atlantic.

However, a major challenge for the bio jet fuel market, is the lack of a viable source for the production of biofuels on a commercial scale which has resulted in the current high bio jet fuel prices, which is leading to the airline companies not buying bio jet fuel on a large scale. Despite the need and airline support for bio jet, producers struggle to make renewable fuel cost-competitive with fossil fuels. Currently, bio jet fuel is supplied through segregated logistics which leads to higher costs which may reduce its demand.

Among conversion pathway, hydroprocessed esters and fatty acids (HEFA) is relatively less costly as compared to other technologies. According to coherent market insights, hydroprocessed esters and fatty acids (HEFA) segment showed highest volume share accounting 43.3% in the global bio jet fuel in 2017. The HEFA conversion pathway received the American Society of Testing and Materials (ASTM) approval for commercial production in 2011 allowing up to 50 percent HEFA bio jet fuel to be added to conventional jet fuel.

Research is being done on alcohol-to-jet pathway, where alcohols such as ethanol or butanol are de-oxygenated and processed into jet fuels. Abundance of feedstock such as ethanol and lignocellulose crops in Latin America is expected to boost growth of the bio jet fuel market in the region. For instance, according to United States Department of Agriculture, in 2015-16 ethanol production in Brazil was registered at 30 billion liters which is expected to reach 31 billion by 2019. Therefore, Latin America has potential to grow in bio jet fuel market due to growing ethanol industry and major regulatory initiatives to reduce carbon emission in Latin America.

Furthermore, various key players are focused towards increasing production bio jet fuels. For instance, In September 2018, Fulcrum BioEnergy, Inc. announced plans to enter into partnership with Marubeni Corporation, Japan Airlines Co. Ltd. (JAL), and the Japan Overseas Infrastructure Investment Corporation for Transport & Urban Development (JOIN). The strategic partnership aims at development of sustainable aviation fuels that will include a US$ 8 million investment by the airline in waste-to-jet fuel process of Fulcrum. 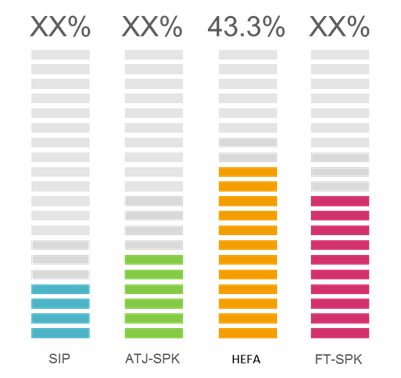 Players operating in the global Bio Jet Fuel market are adopting various growth strategies such as plant’s capacity expansion to cater to increasing demand for Bio Jet Fuel. For instance, In July 2018, Red Rock Biofuels started construction of a new bio refinery facility in Lakeview, Oregon for the project aiming to convert 136,000 tons of waste woody biomass into 15.1 million gallons/year of renewable fuels.

Bio jet is an aviation fuel made from renewable and naturally derived raw materials. It is mixed with petroleum jet fuel and is suitable for use in exiting jet engines. Bio jet fuels have lower greenhouse gas emissions as compared to petroleum jet fuel. The need for the use of environmental friendly jet fuel in order to reduce the greenhouse gas emissions from the aviation sector is a major driver for the bio jet market.

Among feedstock, energy crops segment is gaining traction in the bio jet fuel market due to the fact that energy crops converted via gasification and Fischer-Tropsch (FT) synthesis can result in very low lifecycle GHG emissions. For instance, According to Briefing paper ‘Aviation biofuels: strategically important, technically achievable, tough to deliver’, published by Imperial College London in 2017, Bio jet GHG emissions caused due to energy crops are in the range of 9-13 gCO2e/MJ which is very lower as compared to other feedstock such as sugarcane (26 gCO2e/MJ). Therefore demand for energy crops is expected to increase in forecast period.

Among regions, North America accounted for the largest market share in 2017 and is expected to dominate the market over the forecast period. According to AITA, the U.S. airlines alone burnt about 16.2 billion gallons of fuel during the twelve months between October 2013 and September 2014. Therefore higher demand for renewable aviation fuels is expected to drive the bio jet fuel market in the near future.

What are the growth estimates for bio jet fuel market till 2026?

Which are the prominent bio jet fuel market players across the globe?

What are the key factors hampering growth of the bio jet fuel market?

Lack of viable source for the production of biofuels on a commercial scale, resulting in high bio jet fuel pricesis one of the major factors that is expected to hamper growth of the market over the forecast period.

What are the key factors driving growth of the bio jet fuel market?

Increasing number of air travel is one of the major factors that is expected to propel growth of the market over the forecast period.

What is the compound annual growth rate (CAGR) of the bio jet fuel market for next 8 years?

Which segment based on conversion pathway, accounted for the highest demand in the bio jet fuel market?