The global soda ash market size was valued at USD 11000.00 million in 2021 and is anticipated to witness a compound annual growth rate (CAGR) of 6.2% from 2022 to 2030. The soda ash market is projected to witness significant growth during the forecast period. The demand for soda ash is driven by a growing number of applications, including glass manufacturing and cleaning. Additionally, this product is used in other industrial processes, including chemical and textile manufacturing. Soda ash is an important intermediate in the production of many products, including glass. The global soda ash market is also driven by technological advancements. Technological innovations have made it possible to mine trona, a non-marine mineral that is used in the manufacturing of commercial soda ash. It is used in various applications, including garbage incineration and coal-fired power generation.

North America is also projected to dominate the global market over the forecast period owing to the strong presence of economies like US, Canada, and Mexico. According to the Coherent Market Insights analysis, The United States is the world’s largest and most powerful economy and had a per capita income of USD 62,600 (current USD) in 2018. The economy’s growth rate was 2.9% in 2018, and it is expected to increase by 2.3% in 2019. This improvement is attributed to strong consumer expenditure and a rebound in government consumption. 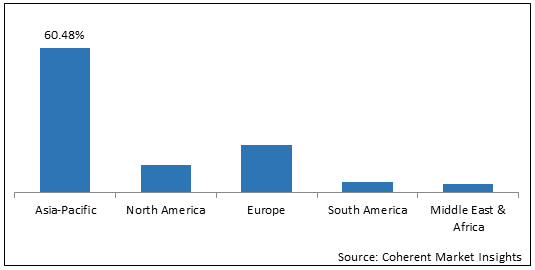 Growing demand for flat glass from construction industry is primarily fueling growth of the soda ash market.  Rapid urbanization and improving living standard across major developing countries is contributing to the growth of the construction sector. This in turn augmenting market growth of soda ash. Flat glass conserve energy, minimize heat penetration into buildings, and offers a striking visual effect.

Increasing global washing soda consumption is again anticipated to foster market growth. According to the Coherent Market Insights analysis, the per capita consumption of toilet/bathing soap and laundry products in India is around 800 grams and 24 kilograms, annually. Around 65% of the demand for laundry products is generated from rural areas. Due to the increasing disposable incomes and growth in the rural markets, consumers are shifting toward premium products, which is further improving the demand for soaps and detergents. The laundry-care market in the country recorded a revenue of over INR 290 billion in 2018, and it is estimated to exhibit an annual growth of 9.8% in 2019.

Rising demand for container glass from food and beverage industry is projected to provide lucrative growth opportunities over the forecast period. Key players are investing heavily in production of container glass. For instance, in December 2018, the Glass Container Company (GCC) announced to expand its production by 60%, through an EUR 17 million project backed by EBRD (European Bank of Reconstruction and Development), Société Générale (as part of the European Investment Bank's Filière du Vin project), and the European Union.

As the population in developing regions increases, the demand for soda ash will grow. As a result, several key players are increasing production capacity and expanding their business in developing regions. They are also investing in research and development to create new products. For example, in June 2022, Tata Chemicals Ltd. has started manufacturing soda ash in Gujarat in 2019 and has a capacity of 0.9 Mn tons per annum.

Increasing sale of electric passenger vehicle due to growing disposable income of consumers is acting as a major trend for soda ash market. According to International Energy Agency (IEA), in 2030, global electric vehicle sales are expected to reach 23 million as per the New Policies Scenario (excluding two/ three-wheelers). In the EV30@30 Scenario, in 2030, around 70% of the vehicle sales in China are expected to be electric vehicles. Also, half of the vehicles sold in Europe are EVs, 37% in Japan, 30% in Canada and the United States, and 29% in India.

Environmental hazards associated with the manufacturing of paper and pulp is projected to hamper growth of the soda ash market. Deforestation, air pollution, water pollution, and overflowing landfills have become major environmental problems. 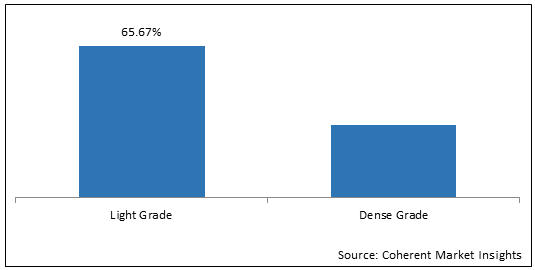 Based on grade type, the market is segmented into Light Grade and Dense Grade. Out of which, Light Grade is expected to dominate the global market over the forecast period and this is attributed to the growing demand from soap and detergent, iron and steel, pulp and paper,  water softening and dyeing,  aluminum cleaning compounds, fiber–reactive dyes, effluent treatment, and production of chemicals applications.     .

Based on end-use application, the market is segmented into Glass, Soaps and Detergents, Chemicals, Water Treatment, Industrial, and Other End-use Applications. Out of which, Glass is expected to dominate the global market over the forecast period. Soda ash plays a crucial role by reducing the furnace temperature required to melt the silica used, thus, reducing the energy required to produce glass. It is a cost-effective source of sodium oxide.

Soaps and Detergents segment is also expected to witness significant growth in the near future and this is owing to the  growing hygiene concern among consumers due to rise in prevalence of infectious disease.

In September 2019, CIECH Soda Romania temporarily stopped the production of soda in its Romanian soda factory, from September 18, 2019.

In June 2019, Şişecam Group and Ciner Group announced an equal production partnership contract for the production of natural soda, in the United States.

*Definition: Soda ash is a naturally occurring mineral with the chemical formula Na2CO3. It is extracted from the ashes of plants using water. It is not toxic and can be used in a number of applications. Sodium carbonate is used in baking, soap, and cleaning products. It is also used in the production of household items and in the pharmaceutical industry.

Soda ash is a mineral that has a wide range of uses, both industrially and environmentally. It is an important component of glass, and is also used for a variety of other chemical processes. For example, it is commonly used to de-calcify ores to remove sulphur and phosphate. It is also used in the recycling of aluminum and zinc. Soda ash is also an electrolyte used in chemistry. It is a non-corrosive acid, which makes it an excellent choice for this purpose. It is also used in the production of dyes, as well as for a variety of chemical reactions. It can also be used to balance the pH levels of lakes affected by acid rain.

The demand for detergents and natural products are driving the global soda ash market growth. The market is also expected to benefit from increased government support and progress in retailing. Additionally, the growing demand for paper will drive consumption of the raw material. There are numerous applications of soda ash, ranging from paper manufacturing to soap production.

On the other hand, environmental hazards associated with manufacturing of paper and pulp is projected to hamper market growth.

Growing demand for flat glass from construction industry and increasing global washing soda consumption are fuelling growth of the market.

The Dense Grade segment is the leading component segment in the market.

Environmental hazards associated with the manufacturing of paper and pulp and availability of substitute such as sodium lauryl sulfate or ethoxylated propylene glycol are the major factors restraining growth of the market.