Submarine networks erase geographic boundaries and distance by allowing humans, and machines, to communicate with each other. The increasing demand for power generated from offshore plants using renewable energy sources and the rising need to interconnecting lands have led to the growth of the global submarine cables market. Submarine cables are generally owned by telecom carriers who would form a consortium of all parties interested in using the cable. For example, NTT Group is working with a consortium of companies, including Amazon, Facebook, Japan's SoftBank Corp. and the Philippines' PLDT to lay submarine cable called Jupiter in Asia, which is expected to go into service next year. Other recent project in the region is Indigo, which was completed in 2020 and paid for by companies such as Google, Telstra of Australia and Singapore Telecommunications. The Southeast-Japan 2 cable is scheduled for completion in 2021 by a consortium comprising KDDI, China Mobile International, and Facebook.

In July 2020, Hellenic Cables, a provider of submarine cable solutions, was received a contract by Seaway 7, the renewables business unit of Subsea 7, to supply 66kV inter-array cables & accessories for the Seagreen offshore wind farm.

The global submarine cables market growth continues to be driven by upgrades in technology and capacity, especially in the transatlantic route. Today’s submarine cables industry is well-informed and innovative, implementing versatile and practical solutions in markets that are increasingly demanding with regards to cost-efficiency, connectivity, and reliability. Ongoing advancements in technologies, with capacity and affordability as the major aspects, are anticipated to play crucial roles in the future growth of the market. The submarine cables industry is now in the process of putting 100G wavelengths into operation across almost the entire transoceanic route, ensuring that the future would be one of the connectivity-based developments.

With the increasing usage of internet, there is a rapid rise in the demand for fast bandwidth speeds, which is surging demand for submarine optical fiber cables. Moreover, smartphone penetration is rising, owing to the increasing number of internet users. According to International Telecommunication Union, a specialized agency of the United Nations, the number of internet users worldwide reached around 4.9 Million in 2021, up from 4.6 Million in 2020. Such rising internet penetration is further expected to drive demand for submarine optical fiber cable over the forecasted period. Additionally, the adoption of optoelectronic devices system allows acoustic frequency strain signals to be detected over large distances and in harsh environments. Thus, monitoring of submarine optical fiber cable system is easy and reliable. Hence, these factors are expected to propel the Submarine Cables Market growth over the forecast period.

Disruptions in Service Due to Lack of Redundancy

Due to a lack of redundancy, the submarine optical fiber cables market faces one of its largest issues as many regions in the world are susceptible to service disruptions. In order to prevent loss of functionality in the event that a link or station's signal is lost, network architectures use redundant bidirectional linkages between stations, similar to roads and water distribution systems. When the shortest link is disrupted, self-healing rings will loop traffic through functional parts of the ring. Although problems in  submarine optical fiber cables occur less frequently than in terrestrial networks but take considerably longer to locate and fix, the cable industry is accustomed to doing so, which is impeding the market expansion.

The COVID-19 pandemic has impacted the global submarine cable market. Several countries have been affected by COVID-19 and governments have announced nationwide lockdowns. Shutdown of cable manufacturing factories due to social distancing are not likely to have immediate negative repercussions on global connectivity, but can push back the deployment of new systems. It is very challenging to get staffs on and off ships that are conducting surveys and studies for upcoming cables or laying new ones. One of the factors hampering global connectivity is the delay in carrying out cable repairs amid the pandemic.

Governments are taking various initiatives to speed up the growth of the submarine optical fiber cables network. For instance, to assist the creation of cutting-edge optical network technology throughout the course of FY 2018–2021, the Ministry of Internal Affairs and Communications of Japan established Technical Research and Development Theme II, "Multicore high-capacity optical transmission system technology. The government is making a variety of investments in the industry to expand optical fiber.

For instance, the Department of Telecom and the Ministry of Communications approved a development package in May 2022 that calls for the construction of 18 new 4G mobile tower sites, the conversion of 19 existing 2G tower sites to 4G service, and the laying of 225 km of optical fiber to provide FTTH (Fiber to the Multi-Mode) connections in Lakshadweep islands.

Additionally, the Kochi-Lakshadweep submarine optical fiber link project, which is part of the US$ 7.38 Mn (INR 61 crore) project approved by the Central Government, is scheduled to be finished by October 2023. Lakshadweep's bandwidth will rise from its current level of 1.71 Gbps to 100 Gbps as a result of this development. 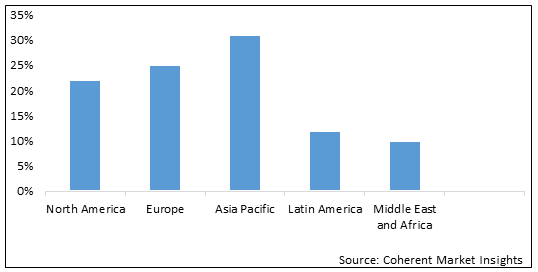 Various Developments by Private and Public Companies; There are several companies involved in various developments in the submarine cables market. In October 2021, NEC Corporation developed a four-core-fiber-optic submarine cable by its subsidiary OCC Corporation in collaboration with Sumitomo Electric, a manufacturer of electric wire and optical fiber cables. Moreover, in August 2022, NEC Corporation, a multinational IT and electronics corporation announced that Seren Juno Network had selected NEC corporation to build a trans-Pacific subsea fiber-optic cable, "JUNO Cable System," connecting California in the U.S. with Chiba prefecture and Mie prefecture in Japan. The cable will span over a distance of 10,000 km and is expected to be completed by the end of 2024.

The submarine communication cables carry around 90% of the data traffic across the world. In addition, their total carrying capacity is in terabits per second. As a result, they are the most valued cables for OTT and communication providers such as Google, Amazon, Facebook, and Microsoft. For instance, in October 2021 NEC, the Japanese IT company announced plans to build a huge submarine cable with four crore fiber optics for Facebook. The submarine is expected to hold a capacity of up to 500mbps across 24 fiber pairs. Most economies consider submarine cables a vital component of the economy and have set regulations to protect them from threats. For instance, the Australian Communications and Media Authority (ACMA) has created safety zones that prohibit activities that can damage these cables linked through Australia & the Rest of the World. In addition, it legalizes the installation of new submarine cables projects.

Over 97% of the global internet traffic is dependent on submarine cables, and almost everyone relies on the Internet for day-to-day activities. The world is connected through the Internet; thus, global traffic is increasing every other day. About half of the global internet traffic comes from Asia Pacific, which, in turn, is driving the demand for submarine communication cables. The need for faster internet services in the Transpacific region is attributed to the limited submarine communication cable systems in the countries in this region, which has led the World Bank and the Asia Development Bank to fund new cable systems in the region.

What is the expected market size of the Market in 2030?

What is the expected compound annual growth rate (CAGR) of the Market during the forecast period (2022-2030)?

What is the primary factor contributing to the growth of the Market?

Major factor driving the growth of Market during the forecast period is increase in advancement in technologies such as fiber optics.

Based on Application, which segment held the largest market share in the Market in 2021?

Submarine Communication segment held the major market share in 2021 owing to increased usage of advanced sensors for measuring temperature, pressure and others.