The global tumor ablation market size was valued at USD 1,018.6 million in 2021 and is anticipated to witness a compound annual growth rate (CAGR) of 11.5% from 2022 to 2028. The market is to propel the market as there is an increase in geriatric population, rising cases of cancer or the tumor. Complications linked with the tumor ablation therapy anticipated to hinder the market growth. Based on the segment the market is divided by technology, by treatment, by application. 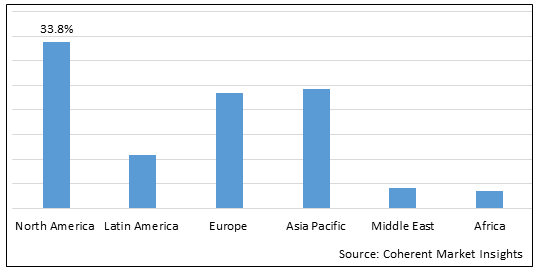 Ablation is a therapy that damages liver cancer without eradicating it. This method is essential in patients having some small tumors and at times when operation is not a choice. Furthermore, patients getting such form of therapy mainly do not require to stay in healthcare, hence rising acquirement rate of ablation systems among people.

Increase in the frequency of several forms of malignancy such as breast carcinoma, colon cancer, prostate cancer, and lung cancer is expected to fuel the need for ablation machinery for therapy of cancer in renal, soft tissue, liver, and bone. Cancer is known as a universal healthcare difficulty as it is one of the main reason of fatality.

Furthermore, rise in the count of rising markets and increase in count of novel goods approved are propelling adequate of advantageous opportunities that will fuel the tumor ablation market further over the predicted duration.

Rising medical analysis for lung carcinoma and ablation therapy is propelling the segment’s growth. For example, a research survey was introduced in December 2021 by Ethicon Inc. to calculate the efficiency and security of the novel wave-certus microwave ablation method in Chinese patients with initial or secondary cancer in the lung. The survey is anticipated to be finished by December 2024.

Tumor ablation treatment has rising as a viable therapy choice for several solid organ cancer. With rising count of processes, complexities may also rise. Most usual side effects of ablation comprise of bleeding and target organ wound.

Anyhow, these side effects are categorized as per their related threat. Side effects linked with these operations can hinder the market growth. Ablation strategies come under clinical device Class II and III categories, as per Food and Drug Administration. These categories need huge control and observation. 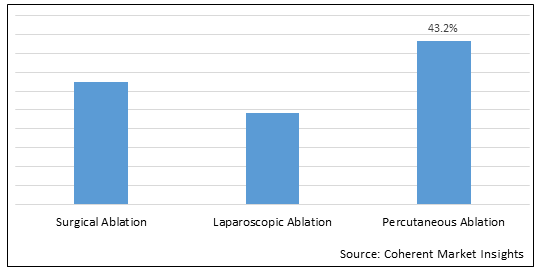 The global tumor ablation market report is segmented by technology, by treatment, by application,

The other one Microwave ablation comprises the usage of electromagnetic waves for tumor destruction, with the device having incidence of at least 900 MHz. It has several benefits over other machineries, in terms of efficiency in abolishing cancer cells. The benefits of this machinery comprise constancy in huge temperature, vast tumor ablation capacity, less ablation duration, decreased pain.

Based on the treatment, the market is segmented into surgical ablation and laparoscopic ablation out of which the Laparoscopic surgeries comprise of fixing of a thin tube from an incision on the belly. This method is utilized to cure cancer linked with abdominal organs, such as kidney and liver. This method utilizes special tools for small cuts to decrease recovery duration.

The other one software, surgical ablation process is a minimally intrusive therapy, whereas ablation catheters/probes are utilized to offer energy right to the malignancy site for therapy. This therapy does not comprise medical eradication of tumors or infected cells. It is conducted on sufferers experiencing problems in medical eradication of malignancy/carcinoma cells.

Based on application, the market is segmented into kidney cancer and liver cancer and many more in kidney cancer Microwave ablation and radiofrequency ablation treatments utilize image supervision to direct syringe from skin into renal cancer. In microwave ablation, microwaves are made from syringe to make small region of heat. The heat destructions and harms the tumorous kidney cells. In radiofrequency ablation, electrical signals with huge frequency are passed from electrode in syringe, creating small region of heat.

In liver cancer the therapy by ablation states in damaging tumor without excision. This is undertaken in sufferers who have few small cancer that cannot be clinically eliminated. When cancer size is much more than 3 cm, ablation is not advised, as this impacts normal tissues as well.

In April 2021, Medtronic gains breakthrough appliances designation from the U.S. Food and Drug Administration for Emprint ablation catheter kit. This method assists the organization in reinforcing its product database.

In August 2020, Ethicon, a part of Johnson & Johnson, gained Food and Drug Administration breakthrough equipment title for microwave machinery. This plan helped the organization in improving its revenue generation.

The global tumor ablation market is highly competitive. This is attributed to continuous launch of new technologies due to ongoing R &D and efforts by value chain participants. Moreover, key players are adopting various business growth strategies in order to expand their presence on regional as well as global basis. Some of the key players in the global tumor ablation market are:

*Definition: Tumor ablation is a minimally invasive surgical process to cure solid malignancy. Special probes are utilized to heat or freeze malignancy without the general operation. Computed Tomography, Ultrasound or Magnetic Resonance Imaging is utilized to guide and position the needle probe into the cancer. This needs only a tiny hole, generally below 3 mm through which the probe is presented.

The efficiency of this new method in curing cancer based on two things the size of the tumor and its convenience to the probes. Generally, for cancers 3 cm or less and easily used percutaneously the focus is to totally kill the malignancy. The larger the cancer the more problematic it is to gain contest cancer fatality, hence early therapy is vital.

Continuous increase in geriatric population is rising the financial burden on the healthcare system. As per Population Reference Bureau, the count of people in the U.S. aged 65 and above is assessed to approximately double from 52 million in 2018 to 95 million by 2060. Such increase in elderly population will consequently lead in greater need for ablation devices for therapy of tumor, fueling the market

On contrary, for introduced tools sold in the U.S., FDA’s Center for Devices and Radiological Health controls the framework and standards about production, labeling, packaging, and storage. To receive grants and permissions, the organizations require to comply with an exhaustive list of standards offered by official regulatory and keep complete documentation of the similar things.

What are the major factors driving the Market growth?

Increasing incidence of cancer are fueling the growth of market.

Which is the leading treatment segment in the market?

The percutaneous ablation segment is the leading treatment segment in the market.

Complications associated with the tumor ablation therapy restraining growth of the market.