The increasing UAV production across various countries and regions is leading to high demand for different types of batteries. For instance, according to Coherent Market Insights, the global military UAV production reached to 3,117 units in 2017. In the UAV market, the U.S. accounted for the largest share of 37.8% by volume and 41.9% by value, in 2017. Moreover, Asia Pacific accounted for the second largest share in the UAV market in 2017, and also is the second largest market for UAV batteries, followed by Europe and the rest of the world. Therefore, the increasing production of UAVs across various regions is expected to drive growth of the global market for UAV battery. In the past decade, the demand for unmanned aerial vehicles increased in various countries such as the U.S., China, India, and others. For instance, in 2019, according to Federal Aviation Administration (FAA), there were 1.3 million registered drones and thousands of unregistered drones in the U.S. The FAA predicted that there will be around 2.4 million drones registered by 2022. Several countries and companies are focusing on purchasing UAVs, owing to an increase in the incidence of enemy trespassing and border security. For instance, in November 2020, Elistair, a France-based company that manufactures drones for surveillance and emergency communication, launched new Orion 2 UAV that is specially designed to carry out surveillance missions over longer period of time. Moreover, UAVs are specially designed to perform various activities such as surveillance, intelligence, and reconnaissance in various missions.

The increasing usage of drones for goods delivery in the transportation and logistics industry is creating lucrative opportunities for existing as well as new players in the market. Moreover, key players in the market are also focused on developing drones with high flight time and payload capacity. For instance, in 2017, Airbus launched Skyways drone delivery services in Singapore for delivery of goods. Furthermore, the growing e-commerce sector worldwide and increasing adoption of drones & UAVs in the e-commerce industry is expected to propel demand for high payload capacity hybrid drones. This is expected to boost growth of the UAV battery market over the forecast period. Furthermore, in June 2019, Zomato, an India-based leading food delivery platform, verified food deliveries by using drone. In October 2019, the Directorate General of Civil Aviation accepted the application of Swiggy, Zomato, Dunzo, and Throttle Aerospace System for presenting their drone package delivery programs in India. According to DGCA, all these companies have received permission to provide delivery services in India by 2020. This, in turn, is expected to drive the market growth during the forecast period.

The increasing use of fuel cell technology for UAV applications is one of the key trends in the industry. Battery systems are comparatively less effective than fuel cell systems in case of runtime of a UAV. For instance, the increasing the flight time of a battery system-based UAV requires increasing the number of batteries, which directly leads to high weight and mass of the battery storage. Whereas, to increase the flight time in a fuel cell-powered UAV, increase in the fuel storage inside the fuel tank is required (but not the mass). This in turn can increase flight time with higher payload capacity. Northrop Grumman MQ-4C Triton is one of the example of fuel cell UAV.

High cost of UAVs restricts their adoption in several countries in Europe and Africa. Moreover, low rate of upgrades in UAVs in such countries also adversely impacts growth of the global UAV battery market.A small military UAV costs around US$ 5,000-15,000, whereas a large-sized UAV costs around US$ 15,000 and above. The components of such UAVs are also expensive. Different size of UAVs have different operational costs depending upon their range and capability. For instance, Predator and Reaper drones cost around US$ 2,500-3,500 per flight hour, whereas a Global Hawk costs around US$ 30,000 per flight hour.

COVID-19 has significantly disrupted almost all the industries including infrastructure, retail, manufacturing, and others. To combat COVID-19 pandemic, most of the countries have implemented lockdowns and are now easing it in phase-wise and industry wise.

During the pandemic, the increasing demand for UAVs in the healthcare applications has led to drive the growth of UAV battery market. To disinfect public places and to contain the spread of COVID-19, many healthcare organizations are deploying UAVs to conduct various tasks such as spraying disinfectant. These spraying UAVs are filled with disinfectant and cover a larger area in less time and 50 times faster than conventional methods. For instance, according to Coherent Market Insights’ analysis, in China, UAVs have the capacity to hold 16 liters of disinfectant and can cover 100,000 area square meters in an hour. These UAVs are easy to use, affordable, and reduce the risk of COVID-19 spread among health workers. Due to this, many countries are adopting disinfecting UAVs to contain the spread of COVID-19.

Moreover, doctors and hospitals need medical supplies and laboratory kits, which increase the demand for UAVs to deliver medicines in the safest and fastest way from hospitals to laboratories. The unmanned aerial vehicle technology speeds up the delivery process and also minimizes the risk of exposure to medical staff. Apart from hospitals, these UAVs are also used to deliver essential goods to customers who are in isolated areas and save time as compared to the conventional transport methods. For instance, in March 2020, due to the COVID-19 pandemic, the U.K. government launched fast track trial for the delivery of medicines from the British mainland to the Isle of Wight using a drone. Such initiatives from the public and private sectors are driving the market growth. In addition to these, there are several benefits offered by drone delivery services such as low-cost operations, faster delivery of packages, less human resource usage, time-saving, and others. This will drive drone companies to collaborate with larger companies and strengthen their presence in the market.

North America held dominant position in the global UAV Battery market in 2020, accounting for 42.2% share in terms of value, followed by Europe and Asia Pacific. 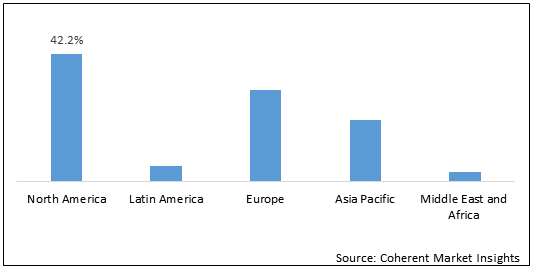 The U.S. accounted for 95.6% share in North America UAV battery market in 2020 and is projected to retain its dominance during the forecast period. This is owing to increasing production and deployment of UAVs for different military applications such as ISR, tactical warfare, and weather analysis in the region. For instance, in August 2020, Defense Innovation Unit, the U.S. Department of Defense organization, tested and approved almost five drones for military and government applications. The U.S. is one of the prominent manufacturers of military drones and it also exports drones to several countries across the globe. For instance, in 2017, according to Coherent Market Insights’ analysis, the total number of UAVs produced in the U.S. was 1,755 UAVs, which is projected to reach around 4,400 units in 2026.

MALE stands for medium altitude long endurance UAVs, which has a flight range of around 25,000-50,000 feet and is capable of flying up to 24 hours. The segment had the largest market share in 2017 Hmong all other UAV types, owing to high usage of drones in military sector for intelligence, surveillance, and reconnaissance (ISR) purposes. In the past decades, the demand for unmanned aerial vehicles increased in numerous countries such as the U.S., China, India, and others. For instance, in 2019, according to Federal Aviation Administration (FAA), there were 1.3 million registered drones and thousands of unregistered drones in the U.S. The FAA predicted that there will be approximately 2.4 million drones registered by 2022. Several countries and companies are focusing on purchasing UAVs, owing to an increase in the incidence of enemy trespassing and border security. For instance, in January 2020, PT Dirgantara Indonesia launched Pesawat Udara Nir Awak jenis Medium Altitude Long Endurance UAV (PUNA MALE), which is specially designed to meet the requirements of Indonesian Air Force. The UAV is featured with fuel capacity of 420 liters and maximum takeoff weight of 1300 kg with payload of 300 kg. Some of the medium altitude long endurance UAV models include Aeronautics Defense Dominator (Israel), CAIG Wing Loong (China), DRDO Rustom (India), Elbit Hermes 900 (Israel), European MALE RPAS (Europe), MQ-1 Predator (USA), HAV-3 (UK), IAI Heron (Israel), Northrop Grumman Firebird (USA), Piaggio-Selex P.1HH Hammerhead (Italy), and TAI Anka (Turkey) 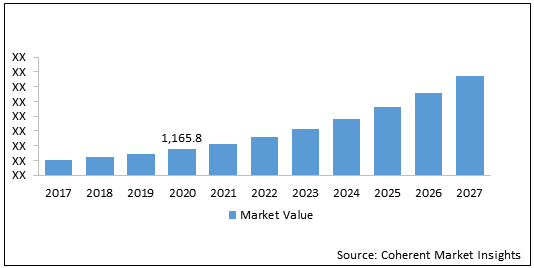 The rising demand for UAVs/drones in the healthcare sector is expected to drive the growth of the market in the near future. For instance, in April 2019, the U.S.-based UAV manufacturer and logistics services provider, Zipline, collaborated with Ghana's Ministry of Health to launch a deliver drone service for medical suppliers in Ghana. Furthermore, in March 2019, Matternet, Inc. entered into a partnership with United Parcel Service of America, Inc. (UPS) to deliver medical samples through drone in all the hospital across Raleigh, U.S. In October 2017, Flirtey, a drone delivery service company, collaborated with REMSA Health, an ambulance service provider, to introduce automated external defibrillator (AED) delivery drone service in the U.S. These factors are expected to facilitate growth of the market.

The increasing use of solar panels in order to enhance flight time of UAVs is one of the key trends, which is expected to drive growth of the market over the forecast period. Majority of UAV OEMs such as SolAero Technologies, Sion Power Corporation, and AeroVironment are focused on implementing solar powered panels in their UAV models in order to offer extra flight time and make battery of UAV as a secondary power backup for UAVs. For instance, in May 2018, BAE Systems and Prismatic signed an agreement for the development of a solar powered high altitude long endurance UAV termed as PHASA-35. Moreover, in 2020, Sion Power Corporation designed the Licerion High Energy (HE) lithium-metal rechargeable batteries for UAV platforms which uses photovoltaic cells mounted on the surface of the aircraft to recharge batteries.

Lithium-ion and lithium polymer batteries are cost effective and offer high power density compared to nickel-cadmium batteries. However, lithium batteries also suffer from heating and fire issues when in direct contact with air or due to leakage in their covering. This can cause severe damage to UAVs or impact their efficiency. Furthermore, low battery life of delivery drones is another factor that could adversely affect the growth of the market. The battery life is still restricted to around 20-30 minutes in one charge while carrying a lightweight payload. These factors are expected to hinder growth of the market over the forecast period.

Increasing production of UAVs for deployment in military across various regions

Based on UAV type, which segment held the largest market share in the market in 2020?

North America region held the largest share in the market in 2020.