Press Release: Unmanned Aerial Vehicle Market is expected to Exhibit a CAGR of 16.3% during the Forecast Period (2021 - 2028)

The unmanned aerial vehicles are the aircrafts that does not have human pilot aboard, and it is controlled autonomously through onboard computers or remote control by a human operator. Increasing defense spending by various governments across the globe and growing terrorist activities are expected to propel the growth of the unmanned aerial vehicle market, over the forecast period (2021 – 2028). For instance, according to the Center for Strategic and International Studies, Chinese Defense spending in year 2016 was US$ 143.7 Billion, which increased up to US$ 172.3 Billion by year 2019.

The increasing demand for unmanned aerial vehicles in military applications such as border security, surveillance, is expected to drive the market growth during the forecast period. This is due to the emergence of drone technology and several capabilities associated with the drones such as video recording and still images. In the past decade, the demand for unmanned aerial vehicles increased in various countries such as the U.S., China, India, and others. For instance, in 2019, according to Federal Aviation Administration (FAA), there were 1.3 million registered drones and thousands of unregistered drones in the U.S.

COVID-19 has significantly disrupted almost all the industries including infrastructure, retail, manufacturing, and others. To combat COVID-19 pandemic, most of the countries have implemented lockdowns and are now easing it in phase-wise and industry wise. During the pandemic, the demand for UAVs (Unmanned Aerial Vehicles) increased in healthcare, e-commerce, and many other applications.

To disinfect public places and to contain the spread of COVID-19, many healthcare organizations are deploying UAVs to conduct various tasks such as spraying disinfectant in the affected areas. These spraying UAVs are filled with disinfectant and cover a larger area in less time and are 50 times faster than conventional methods. For instance, according to Coherent Market Insights’ analysis, in China, UAVs have the capacity to hold 16 liters of disinfectant and can cover 100,000 area square meters in an hour. These UAVs are easy to use, affordable, and reduce the risk of COVID-19 spread among the health workers. Due to this, many countries are adopting disinfecting UAVs to contain the spread of COVID-19.

North America is expected to hold dominant position in the global unmanned aerial vehicle market during the forecast period.

North America held dominant position in the global unmanned aerial vehicle market in 2019, accounting for 37.2% share in terms of value, followed by Europe, and Asia Pacific. 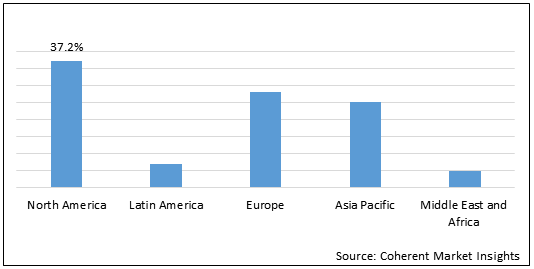 Several key players such as Amazon, 3D Robotics, AeroVironment, Inc., Google, DHL, and others are offering UAV services in remote areas in the North America region, which has led to an increase in demand for unmanned aerial vehicles in North America region. Moreover, the U.S. government agencies are also encouraging the involvement of UAVs in aviation safety and operations in the U.S. navigable airspace, including UAV operations and end-to-end delivery of products. For instance, in April 2019, Wing, the Alphabet-owned start-up engaged in the drone delivery, was approved by Federal Aviation Administration (FAA) for delivery drones in the U.S.

Among type segment, the fixed wing drone sub-segment is expected to dominate the market during the forecast period, owing to increasing usage of fixed drones for aerial mapping of large areas in shorter period of time. 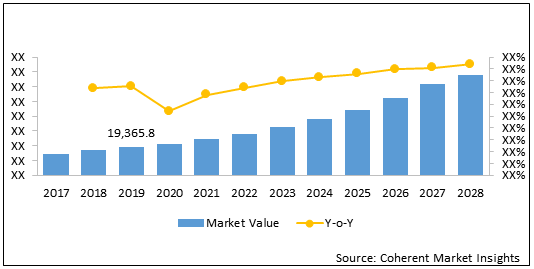 Unmanned aerial vehicles are also known as drones. UAV is a remotely operated airborne system or aircraft, by a human operator or autonomously by an onboard computer. The collection of information such as aerial videos, and photographs is a common application of unmanned aerial vehicles, since carrying a sensor.

The unmanned aerial vehicle market growth is majorly attributed to increasing application of UAV’s in many civil application domains such as real – time monitoring, remote sensing, delivery of goods, security and surveillance, providing wireless coverage, precision agriculture, and civil infrastructure inspection. For instance, in September 2018, 3D Robotics (3DR) entered into a partnership with China-based drone manufacturer Yuneec. Under this partnership, 3DR focused on serving the security needs of U.S. government customers and their vendors in construction, engineering, and public safety sectors. Moreover, the unmanned aerial vehicles are getting adopted by fire department for the safety of firefighters, thus, there is significant demand for UAVs for aerial applications. For instance, in April 2019, DJI entered into a partnership with Los Angeles Fire Department (LAFD) to test and deploy DJI drone technology for public safety applications.

Although drones or unmanned aerial vehicles are meant for beneficial commercial applications, the images captured can be used for illegal activities. Potential criminals may conduct virtual surveillance of banks, government buildings, parks, or schools using online aerial and satellite images. For instance, in January 2017, in India, the Mumbai Police banned all flying objects such as drones and gliders in the city. This action was taken, as they believed that terrorist attacks can be carried out by terrorists through drones that can be controlled by remote or remote controlled aircrafts in high altitude area. If adequate safety measures are not taken, and lack of proper security and privacy issues are expected to hinder the market growth over the forecast period.

Growing demand for aerial imaging in different sectors such as energy, defense, forestry, agriculture, real estate, is expected to drive growth of the market during the forecast period.

Among type segment, which sub-segment held the largest market share in the market in 2019?

The fixed wing drone segment held the largest market share among type segment, contributing 65.7% in terms of value in 2019.