An airplane is a transportation vehicle that is used to transport people and cargo from one place to another through air. Airplanes or aircrafts are designed in many shapes and sizes depending on its application. The aircraft can be categorized into following types: narrow body aircraft, wide-body aircraft and turboprop aircraft. Aircraft contains many parts such as aircraft engines, landing gears, propellers, wings and flaps, cabin interiors, fuselage, cockpit etc.

The expansion of airlines to meet a surge in the number of air travelers from developing countries of Asia Pacific region such as India and Vietnam is expected to propel the demand for aircraft parts across the globe over the forecast period. For instance, according to India Brand Equity Foundation, in FY20 the number of domestic passenger traffic was 274.50 Million in India, which was growing at a CAGR of 12.91% over FY16.

COVID-19 has significantly disrupted several industries including infrastructure, retail, manufacturing, and others. To combat the COVID-19 pandemic, most of the countries have implemented strict lockdowns and canceled their domestic and international flights, so the monetary spending of people on air travel activity has also reduced, according to CMI’s analysis.

Companies offering aircraft parts are experiencing disruption in their production due to the lack of availability of workers. COVID-19 pandemic has acted as a restraint to the growth of the aircraft parts market in 2020 as supply chains were disrupted due to the unavailability of workers at manufacturing facilities. Also, companies were unable to move the cargoes due to trade restrictions. Canada aircraft manufacturers depend heavily on the supply of parts and components from the U.S. However, it is expected that the aircraft parts market will recover from the crisis over the forecast period. Several companies witnessed decreased sales of aircraft parts as the supply chain was disrupted by lockdown orders and domestic and international travels were also banned. For instance, in the period 2019 to 2020, the revenue of key aircraft manufacturers such as General Dynamics and Lockheed Martin decreased by about 4.1% and 8.6%, respectively.

North America held dominant position in the global aircraft parts market in 2019, accounting for 35.1% share in terms of value, followed by Europe and Asia Pacific. 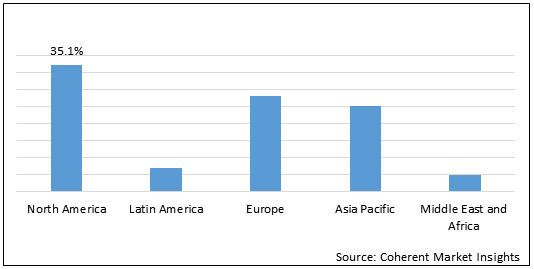 In the year 2020, the North American region held the dominant market share in the global aircraft component market and is expected to retain its dominance over the forecast period. The growth of the North American region is majorly attributed to the presence of large aircraft manufacturers in the region such as Boeing, Bombardier Inc., Lockheed Martin Corporation etc. In addition, many aircraft manufacturers are engaged in the export of aircraft components to several other countries. For instance, every year, Canada imports aircraft parts such as wings, fuselages, engines etc. worth around US$ 10 to US$ 20 billion, out of which about 50% to 60% of parts are from the U.S. 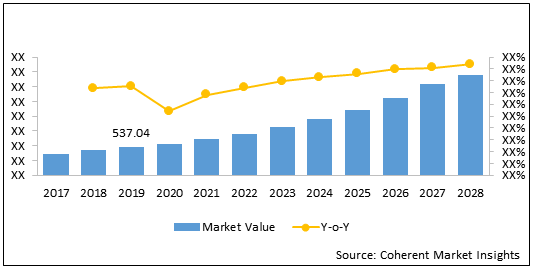 The aircraft components have evolved largely to make a flight safer, faster, and efficient. Aircrafts are designed for multiple purposes and most of them have the same major components. Most airplane structures include fuselage, wings, empennage, and landing gear. The fuselage includes cabin and/or cockpit, which contains seats for the occupants and the controls for the airplane. The empennage (also called tail) is the rear part of the aircraft. Usually, it includes the stabilizers, rudder, elevator as well as many other components.

The demand for aircraft parts is majorly attributed to the increase in use of carbon fiber and composite materials to reduce the overall structural weight of the aircrafts. In North American region, aircraft material vendors are focusing on supplying advanced light weight material to key airline companies. For instance, in January 2019, Teijin Limited announced that it would be supplying Tenax carbon fiber and Tenax TPUD, which is a unidirectional pre-impregnated tape, to Boeing Company. TENAX TPUD is made from thermoplastic resin, which has high fatigue and impact resistance compared to conventional materials. Moreover, in January 2019, Teijin Limited received a contract to supply its TENAX carbon fiber to Bombardier Inc., a Canada-based manufacturer of commercial and business jets.

Carbon fiber and composite materials are expensive as compared to conventional materials. Thus, carbon fiber aircraft parts are expensive and require high initial investment. However, it can be a challenge for small companies operating in North America aircraft parts market to pay such high initial capital, which is expected to hamper the market growth over the forecast period. In addition, the aircraft structures have complex architecture and require a lot of research and development activities, which is expected to act as challenging factor for small companies in aircraft parts market.

The increase in adoption of light weight aircraft parts is expected to drive growth of the market during the forecast period.

Among type segment, which sub-segment held the largest market share in the global aircraft parts market in 2019?

The wide body aircraft held the largest market share among type segment, contributing 54.6% in terms of value in 2019.