Press Release: US Computer-Aided Detection (CAD) Market to Surpass US$ 679.9 Million by 2027

Increasing prevalence of breast cancer is expected to propel growth of the U.S. computer-aided detection (CAD) market over the forecast period. For instance, according to Breastcancer.org, in 2019, an estimated 268,600 new cases of invasive breast cancer were expected to be diagnosed in women in the U.S.

Moreover, increasing adoption of CAD among radiologists is also expected to propel growth of the market. Use of CAD can help to reduce the false negative rate and increase the detection of breast cancer, particularly early breast cancer, which is expected to further boost its adoption. 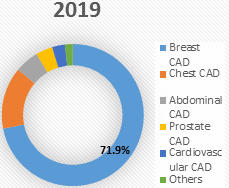 Inadequate reimbursement policies related to CAD is expected to hinder growth of the U.S. computer-aided detection (CAD) market. Majority of medical insurance companies do not offer reimbursement for procedures using CAD, which has led to use of alternate methods such as pathological test, biopsy, mammography, or MRI.

Moreover, lack of trained radiologist and technicians is also expected to hamper growth of the market.

Development of single packaged software solution for multiple applications is expected to offer lucrative growth opportunities for players in the U.S. computer-aided detection (CAD) market. Majority of software available in the market can assess images from one modality for specific indication. Key players can focus on introducing a single software that is capable of examining images from different modalities for several indications. Such approach would reduce the cost of products and services related to CAD.

More flexibility in licensing and renewal process of CAD software is also expected to fuel growth of the market. Majority of market players offer a one-year license agreement, which can be renewed for another year by paying 70% of the actual cost. However, extending the licensing period and decreasing the renewal cost is expected to increase demand for CAD.

The use of Artificial intelligence (AI) in CAD has proven to enhance the efficiency and accuracy of an advanced imaging technology used to screen for breast cancer. Use of AI also increases the sensitivity and specificity of CAD. It can also decrease the recall rate for non-cancers, or the rate at which women were called back for follow-up examinations based on benign findings and the reading time.

Key players in the market are focused on product commercialization through various platforms to enhance their market share. For instance, in December 2019, iCAD, Inc. announced that its Breast Health Solutions suite, which includes ProFound AI for Digital Breast Tomosynthesis (DBT), will be available on the Nuance AI Marketplace.

Key players in the market are focused on expanding their product and service portfolio. For instance, in November 2019, Qlarity Imaging, a developer of computer-aided breast cancer diagnostic system, announced to introduce complementary software to support radiologists in MRI-guided procedures.

Chemiluminescence is the process of converting chemical energy into visible light that is emitted as the result of che...

Intravascular ultrasound imaging system (IVUS) is a catheter-based imaging technique, which allows visualization and a...

Medical x-ray film processor are the most important part for the X-ray image processing, these processors are used to ...

Neuro-navigation also known to as frameless stereotactic surgery refers to the technique that involves performance of ...