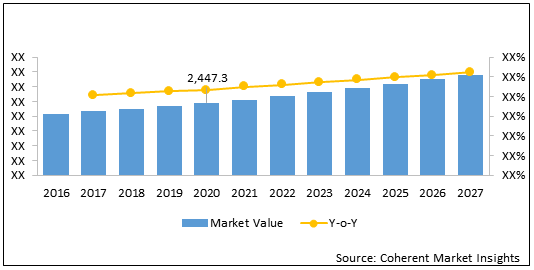 The U.S. safety needles market growth is primarily driven by the increasing incidence of chronic diseases such as cancer, diabetes, and others in the U.S. According to the American Cancer Society 2020 report, estimated 1.8 million new cancer cases were diagnosed and 606,520 cancer deaths were reported in the U.S. in 2020.

Moreover, various strategies adopted by market players include new product launches, acquisitions, and agreements, in order to retain their market position, and this is expected to drive the market growth over the forecast period. For instance, in February 2018, B. Braun Medical Inc, a medical device company focusing on manufacturing of medical devices such as syringes, safety needles and others, introduced its Surecan Safety II Port Access Needles with the safety mechanism, which is designed to reduce the risk of accidental needlestick injuries by shielding the needle tips.

Following the outbreak of COVID-19 in December 2019, the disease has spread to over 100 countries across the globe and the World Health Organization declared it a public health emergency. According to the World Health Organization’s report, manifestation of coronavirus (COVID-19) has resulted in more than 110 million infected individuals worldwide as of February 19th, 2021.

COVID-19 can affect the economy in three main ways; by directly affecting production and demand, by creating disruptions in distribution channels, and through its financial impact on firms and financial markets. In the U.S., according to the latest update by Economic Times, a business daily newspaper and journal, stated that there has been a huge plunge in consumer spending as people stayed at home and avoided shopping, traveling, or gathering in crowds and caused the economy to sink at an estimated annual rate of 32% in the April-June 2020 quarter. 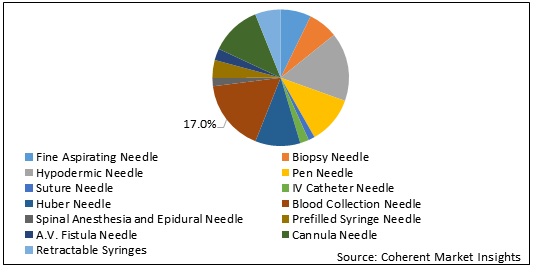 The increasing product launches of safety needles in the U.S. used for sample collection is expected to drive growth of the sample collection segment in the forecast period. For instance, in 2016, Nipro Medical Corporation, manufacturer of Renal, Medical-Surgical and Interventional Radiology products, launched SafeTouch Safety Needle, in the U.S. The device has features such as easy to use, and safety anti-needlestick mechanism

Moreover, high incidence of trypanophobia (fear of needles) is also expected to limit the growth of the market. For instance, according to the study, ‘The fear of needles: A systematic review and meta-analysis,’ published in the Journal of Advanced Nursing in January 2019, the prevalence of needle fear ranged from 20-50% in adolescents and 20-30% in young adults in U.S.

Key players are focusing on product launches and product approvals to strengthen their presence in the U.S. safety needles market. For instance, in May 2016, Retractable Technologies Inc, a company designs, develops, manufactures, and markets safety needle devices for the healthcare industry, announced the launch of Easy point needles. The safety Easy point needles are developed through automated retraction technology and can be used with luer lock technology, and started marketing and selling of the product mainly in the U.S.

Furthermore, in May 2017, Gerresheimer AG, a medical device company, announced the launch of Gx InnoSafe. The Gx InnoSafe is a syringe with an integrated and passive safety system that prevents unintentional needle stick injuries and also eliminates the possibility of accidental reuse.

What are the major drivers for the market growth?

Increasing prevalence of gynaecologic cancer and spine disorders, government initiatives for blood collection and favourable reimbursement for pen needles are expected to drive the market.

Blood Collection Needles is estimated to hold major market share in 2020, as increase in blood donations and need for blood components due to increasing patient population.

Which is the leading application segment in the market?

Drug Delivery segment is estimated to hold major market share in 2020, owing to the increasing launches of safety needle used for drug delivery.

Which is the leading end-user segment in the market?

Hospital segment is estimated to hold major market share in 2020, owing to the increasing number of patient population suffering from traumatic injuries and rising hospital visit of patients suffering from chronic conditions to undergo surgeries.

Increasing development and awareness of needle-free injection technology, high incidence of trypanophobia (fear of needles) and safety needles product recall due to low quality and loss of function of the products are the major restraints of the market.

The peripheral intravenous catheter (PIVC) is a small flexible tube. This is inserted into a peripheral vein...

Syringes are medical devices used to inject fluid or withdraw fluid from the body. A medical syringe consist...

Bone injection gun is an intraosseous infusion device used in immediate medical intervention. It can be used...

Oncology devices play a major role in healthcare, owing to factors such as increasing incidence of cancer in...