The global WiGig market size was valued at USD 2541.8 million in 2021 and is anticipated to witness a compound annual growth rate (CAGR) of 19.5% from 2022 to 2030. Several strategic measures are being taken by the key players to achieve a competitive edge in the WiGig market, which is driving growth of the market.  Increasing internet penetration in APAC is anticipated to contribute to the market growth. Meanwhile, the booming IT and telecommunications industry in the region is also expected to drive the market.

Among regions, North America is anticipated to witness substantial growth in the global WiGig market over the forecast period. The growth of this region can be attributed to the high internet penetration, large number of smartphone users in Canada and the U.S. The regions is observed to migrating toward multi-gigabit, residential internet access, with the use of fiber to the home. The extraction of more bandwidth or the economic feasibility of the existing network with the use of DOCSIS 3.1 is trending the in region, which will create a significant opportunity of speed and wireless. This in turn is creating demand for WiGig in the region, which is expected to support growth of the market.

Moreover, Asia Pacific is also anticipated to show significant growth in the global WiGig market over the forecast period. The region has been witnessing strong demand for high-speed internet and 5G network in recent years. The developing countries such as Japan, China, Taiwan, Australia, and India across the region are the major driving countries 5G network and high-speed internet. Moreover, several companies are trying to enter the WiGig market in this region. For instance, in January 2020, Fujikura, based in Japan, an electrical equipment manufacturer started shipping its sample for 60GHz millimeter wave wireless communication module to be used in gaming VR/AR applications to achieve a wireless communication at 2Gbps. 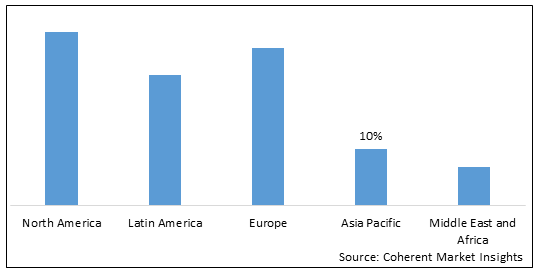 Growing adoption of high-resolution videos to boost the market pace

The adoption of OTT (over-the-top) content is increasing all over the world with the 5G technology likely to be the most substantial next-gen cellular network technology. With this latest trend of OTT, it requires nearly 30Mbps on internet bandwidth to stream 4K videos. For streaming high-resolution video, it needs double the bandwidth available currently, which could be unusual for the consumer-grade internet connections. However, the launch of 5G is likely to provide the extra bandwidth, which would make 4K and VR streaming the defining features in the near future. Thus, these factors are expected to propel growth of the global WiGig market over the forecast period.

Growing adoption of strategic partnerships by market players is anticipated to offer growth opportunities in the global WiGig market over the forecast period. WiGig is likely to witness mass-market adoption, if it becomes the defacto standard for fixed wireless access and mmWave backhaul coonection. Recently Qualcomm and Facebook partnerd in the Terragraph project to provide internet connectivity in thick urban areas with the use of 60GHz nodes install as access points. The Terragraphy system was tested in Hungary. With the increase in expansion of the use case to other countries, and beginning of implementation, the WiGig technology is likely to be in demand in the coming years.

Rise in gaming applications of WiGig are expected to provide market players with business opportunities in the global WiGig market over the forecast period. The applications of WiGig in gaming, multimedia, and networking are increasing all over the world due to rise in digitalization. The video game industry is rapidly growing globally, along with the popularity of gaming among the youth. This in turn is anticipated to create strong demand for WiGig in the industry, as it can facilitate the audio and display application for enhancing the gaming experience. This is expected to impact the market growth positively in the coming future.

Growing consumer applications of WiGig is a growing trend

WiGig was on the market for a long time, however it was still unable to make its market. The standard mainly relied on the success of consumer applications such as VR/AR applications and Ultra HD video streaming. Now, the demand for these WiGig has increased as the adoption of VR/AR and streaming ultra HD video is rising all over the world. These applications are likely to boost adoption of WiGig in the future, which in turn is expected to propel growth of the market.

Key players in the global WiGig market are focusing on launch of novel products to gain a strong position. For instance, in February 2020, Sivers IMA and Ampleon in collaboration introduced new 5G mmWave Dual Quad Beamformer ICs. They are said to be including two quad antenna connection with either Tx or Rx channels and integrated RF switches. This novel solutions supports both horizontal and vertical polarization MIMO.

Limitations of WiGig technology to hamper the market growth

Along with its various benefits, WiGig has certain limitations, such as shorter operating range, which limits it to more specific uses compared to conventional Wi-Fi. WiGig operates in the 60GHz frequency range due to which it has severe limitations in terms of range. It offers higher frequency; which comes with shorter wavelength. The shorter wavelength suggests higher attenuation and shorter range. Thus, these factors impact the adoption of the WiGig technology, which in turn is expected to hinder growth of the global WiGig market over the forecast period.

Rise in cost of chipset manufacturing to restrain the market pace

The global WiGig market growth is likely to be restrained due to the rising cost of chipset manufacturing along with development of complex embedded WiGig chipsets. Due to high expenditure on industrial fabrication, the cost of manufacturing WiGig chipset is increasing all over the world. The current average expenditure on fabrication per WiGig chipset is significantly high than average expenditure on per chip set few years ago. This can be attributed to growing complexity in the architecture of the chip-level. These factors thus, are expected to hamper growth of the market in the near future. 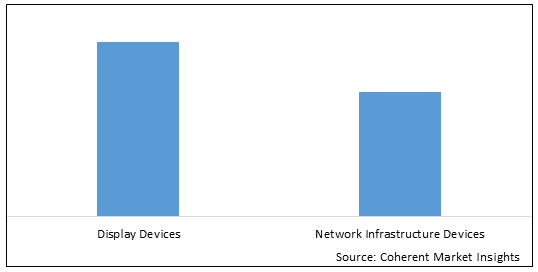 The global WiGig market report is segmented into Product and Application

Based on Product, the market is segmented into Display Devices, Network Infrastructure Devices. Out of which, Display Devices is expected to dominate the global market over the forecast period and this is attributed to the benefits such as high-speed and ease of operation of WiGig technology, leading to rise in demand in various sectors, specifically in the gaming sector.

Network Infrastructure Devices segment is also expected to witness significant growth in the near future and this is owing to the growing transformations for network infrastructure devices such as modems, routers. With increasing technological advancements in WiGig technologies, deployment of several routers with WiGig capabilities is increasing all over the world, which is supporting growth of the market.

Based on Application, the market is segmented into Gaming and Multimedia, Networking, and Other Applications. Out of which, Gaming and Multimedia is expected to dominate the global market over the forecast period and this is attributed to the rise in demand for augmented reality and virtual reality leading to growing shift towards wireless solutions to untether the headset from the PC. As WiGig technology offers the power, bandwidth, and super low latency required for making these application viable, it is increasing being adopted in gaming and multimedia sector.

Other applications segment is also expected to witness significant growth in the near future and this is owing to the growing applications in the industrial sector due to growth of the industrial machine to machine communication and connected devices. These devices are utilized in industrial operations needing high-speed internet services.

In September 2019, Qualcomm Technologies Inc. acquired all the stakes with TDK for RF360, which is a joint venture created by TDK and Qualcomm for offering RF front-end (RFFE) solutions.

In December 2019, Intel Corporation, completed acquisition of an Israel-based AI chip start up Habana Labs by investment of over US$ 2 billion. The company is known to be specializing in development of programmable machine learning and AI accelerators for cloud datacenters, and has raised nearly US$ 75 million in venture capital.

In February 2019, Broadcom Inc. launched the BCM43752 chip, WiFi chip for mass-market smartphones. This is an integrated chip in innovations in Bluetooth 5 and Wi-Fi 6, which allows smartphone makers to offer a high-performance, low-cost connectivity solution for their mass market products.

In February 2019, Peraso Technologies Inc. raised US$ 42 million through VC funding. The company announced the plans to invest this fund in product development for wireless market in competition to Intel and Qualcomm.

The global WiGig market is highly competitive. This is attributed to continuous launch of new technologies due to ongoing R &D and efforts by value chain participants. Moreover, key players are adopting various business growth strategies in order to expand their presence on regional as well as global basis.

WiGig is a wireless network technology that is designed to provide high speed internet connections to a variety of devices. It is capable of transmitting data at multi gigabit per second rates, making it perfect for HD video files and high definition audio. It uses a frequency in the 60 GHz band.

Developed by the Wireless Gigabit Alliance, WiGig is the next generation of high-speed wireless networking. Although the technology has not yet hit the market, its promises are exciting. Some of its key benefits include increased speed, low latency, and reduced interference. Moreover, WiGig supports beam forming and a number of other technologies. As part of its mission to promote short-range wireless transmission technology, the Wireless Gigabit Alliance recently formed a new high-speed wireless standard called WiGig. The standard is based on the 60 GHz band and offers the ability to deliver internet connectivity to a wide array of devices.

The key drivers of the WiGig market include rising demand for high-speed Internet and the rapidly growing video game industry. A growing trend of work-from-home is also generating significant demand for fast data transfer. Moreover, the adoption of Bring Your Own Device (BYOD) policy at workplaces is driving the market. Moreover, large enterprises are increasingly adopting WiGig solutions to meet their bandwidth needs.

However, factors such as high cost of chip manufacturing, and limitations of WiGig technology are expected to hamper growth of the globa WiGig market over the forecast period.

Rise in technological development in communication sector and growing adoption of high-resolution videos are fuelling the market.

The Display Devices segment is the leading component segment in the market.

Limitations of WiGig technology and rise in cost of chipset manufacturing are the major factors restraining market.