Press Release: Anesthesia and Respiratory Devices Market to Surpass US$ 44.2 Bn by 2027

Anesthesia and Respiratory Devices Market to Surpass US$ 44.2 Bn by 2027

The complete version of the REPORT will include the impact of the COVID-19, and anticipated change on the future outlook of the industry, by taking into the account the political, economic, social, and technological parameters. 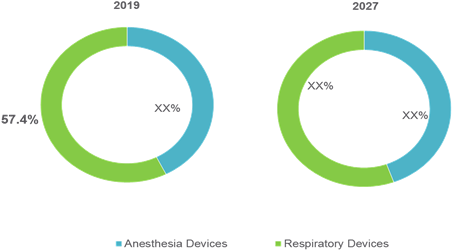 When anesthesia is administered to patients with respiratory diseases then special monitoring and care for the patient is necessary, which require advanced anesthesia monitors and devices for patient care. Moreover increasing prevalence of respiratory diseases such as asthma and COPD, are expected to propel the anesthesia and respiratory device market growth over the forecast period. For instance, according to the Forum of International Respiratory Societies, in 2013, around 235 million people suffered from asthma and over 200 million people were affected from chronic obstructive pulmonary disease (COPD), and around 65 million endure mild-to-severe COPD.

Moreover, in 2014, according to the Canadian Lung Association (CLA), around 2.5 million people in Canada suffered from asthma, including 1 million males and 1.4 million females. The number of people suffering from asthma was 0.9 million in Ontario, 0.6 million in Quebec, and 0.3 million in British Colombia, states of Canada in 2014.

Increasing incidences of chronic respiratory diseases such as asthma, chronic pulmonary lung disease, pulmonary hypertension, and occupational lung disease are the major factors that are expected to drive growth of the anesthesia and respiratory devices market. The need of therapeutic respiratory devices in the medical as well as in homecare settings are also expected to fuel growth of the market over the forecast period. For instance, in 2017, according to the World Health Organization (WHO), around 235 million people suffered from the asthma, a major non-communicable disease.

Anesthesia devices are used mainly in all types of surgeries, as these are designed to provide an accurate and continuous supply of mixed medical gases with anesthetic vapors, which is delivered to patient at a safe pressure and flow. Thus, increasing number of surgeries is expected to drive the anesthesia and respiratory market growth. For instance, in 2014, according to the Healthcare Cost and Utilization Project, around 17.2 million patients visited hospital (ambulatory or inpatient) for invasive and therapeutic surgeries, among which, 57.8% of surgeries occurred in a hospital-owned ambulatory surgery setting and 42.2% of surgeries were performed in the hospital inpatient settings in the U.S.

Key players are focusing on inorganic strategies to enhance and expand their product portfolio, which is expected to propel the global anesthesia and respiratory devices market growth

Increasing demand and usage of anesthesia and respiratory devices has influenced major players to expand their product portfolio and strengthen their position in the market, this has led to increase in adoption of inorganic strategies such as mergers and acquisitions. For instance, in November 2015, ResMed acquired Denmark-based Maribo Medico, a privately-held company specializing in the education, diagnosis, treatment, and management of sleep-disordered breathing and respiratory diseases.

Asia pacific is also expected to witness growth in the global anesthesia and respiratory devices market, owing to adoption of inorganic strategies such as collaboration, acquisition, partnership and others by manufacturers to expand their portfolio and market presence in countries such as China. For instance, in October 2015, ResMed completed the previously announced acquisition of Curative Medical, a provider of non-invasive ventilation and sleep-disordered breathing medical devices and accessories in China.

Rising incidence of respiratory diseases is expected to drive the global anesthesia and respiratory devices market growth. Increasing incidences of chronic respiratory diseases such as asthma, chronic pulmonary lung disease, pulmonary hypertension, and occupational lung disease are the major factors that are expected to augment growth of the anesthesia and respiratory devices market over the forecast period. For instance, according to the World Health Organization (WHO), in 2017, around 235 million people suffered from major non-communicable disease asthma.  Moreover, according to the Centers for Disease Control and Prevention (CDC), around 27 million Americans were suffering from asthma in 2016. It is the most common chronic condition among American children, where 1 child out of every 12 has asthma.

Increasing mergers and acquisition and collaborations by manufacturers is expected to drive the global anesthesia and respiratory devices market growth over the forecast period.

Manufactures are engaged in adopting strategies such as mergers and acquisitions, or collaborations, in order to expand their product offerings and global presence in market. For instance, in August 2016, Boehringer Ingelheim entered into collaboration with Qualcomm Life Inc., which provides device connectivity and data management solutions to medical device manufacturers to deliver wireless health. The collaboration enables designing the inhaler in way that it can connect with Qualcomm Life2net platform and thereby, track puffs from the Respimat inhaler.

Moreover, in October 2015, ResMed completed the acquisition of Curative Medical, which is a leading provider of non-invasive ventilation and sleep-disordered breathing medical devices and accessories in China.