Antiparasitic drugs such as anthelmintics, antiporozoals, and others agents are used in the treatment of the parasitic infectious diseases.  According WHO estimation in March 2020, parasitic disease affects 1.5 billion people globally. These diseases include gastrointestinal problems, anemia, wasting, and cognitive and growth deficits in children, and others infections. Among all 1.5 billion people affected with parasitic infectious disease, 24% people are infected with soil-transmitted helminth infections worldwide. Some parasitic infections are life-threatening, while others can cause discomfort in the healthy lifestyle. 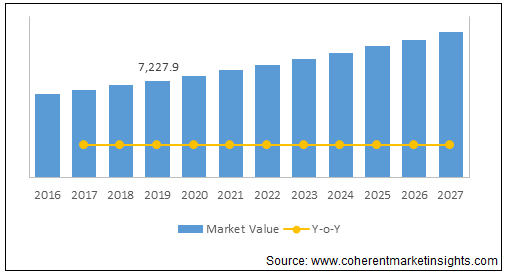 The increasing research and development of novel treatments is expected to drive the market growth.

Researchers are focusing on the development of the novel treatments for rare parasitic diseases. For instance, in December 2019, researchers from the University Of Maryland School Of Medicine announced that they have developed a novel treatment for lymphatic filariasis, a disabling parasitic disease that is difficult to treat. The novel treatment has been developed using innovative RNA sequencing techniques. According to the University Of Maryland School Of Medicine, lymphatic filariasis affects over 120 million people worldwide, and it is more prevalent in Asia, Western Pacific, Africa, and parts of the Caribbean and South America. Such factors are driving the growth of the antiparasitic drugs market.

Most of the antiparasitic drugs cause severe side effects which is expected to hamper demand for these drugs. For instance, Nifurtimox, a drug or the treatment of Chagas’ disease, may not be effective if taken for long courses. Some other disadvantages such as drug resistance, adverse effects, and higher cost of antimalarial drugs such as chloroquine, sulphadoxine/pyrimethamine, mefloquine, and others is expected to hamper the growth of the antiparasitic drugs market.

Among regions, Africa is expected to hold a dominant position in the market, owing to increasing risk of malaria in the region. For instance, according to the WHO, around 92% of malaria cases in the world occur in Sub-Saharan Africa. In 2017, the WHO also estimated that among the five countries which accounted for nearly half of all malaria cases worldwide, four countries were from Africa region including Nigeria (25%), Democratic Republic of Congo (11%), Mozambique (5%), and Uganda (4%).

In addition to Asia Pacific and Africa, some areas of North America are affected with parasitic infectious diseases. For instance, according to the Centers for Disease Control and Prevention, in 2014, more than 300,000 people in the U.S were infected with Trypanosoma cruzi, the parasite that causes Chagas disease. Moreover, every year, around 300 babies with Trypanosoma Cruzi are born in the U.S. Also, every year, 1,000 hospitalizations for symptomatic cysticercosis occur in the U.S. Furthermore, according to CDC, five neglected parasitic infections (NPIs) including Chagas disease, cysticercosis, toxocariasis, toxoplasmosis, and trichomoniasis are more common in the U.S. Thus, the rising burden of the parasitic infection among the U.S. population is expected to drive growth of the North America antiparasitic drugs market.

Parasites are the living organisms found on the host body. There are three type of parasites; protozoa, helminths, and ectoparasites, which can cause parasitic infections in humans. Malaria, Chagas disease, Echinococcosis, Trichomoniasis, Amebiasis, etc., are some of the common parasitic infections affecting the human health. Among these, malaria is considered as a deadly infectious disease affecting the population in both tropical and subtropical regions. Different types of antiparasitic drugs are available in the market for treating such parasitic infections.

Malaria, which is caused due to the bite of infected female anopheles mosquito, is considered as a life-threatening infectious disease affecting a large number of people across the world. According to the World Health Organization (WHO), in 2018, around 228 million cases of malaria were diagnosed globally. Moreover, the global death toll due to malaria reached 405,000 in 2018 and an estimated 219 million cases were diagnosed in 2017. Sub-Saharan Africa is the most affected region by malaria and according to WHO estimation, the region accounted for 93% of malaria cases among all the global cases. Thus, the increasing incidence of malaria in the world is expected to drive demand for antimalarial drugs, and thereby drive the growth of the antiparasitic drugs market during the forecast period.

Moreover, various pharmaceutical companies and research institutes are actively participating in research and development of novel drugs for treatment of parasitic infections. For instance, in August 2019, Insud Pharma (in collaboration with Chemo Research S.L.) initiated Phase 3 clinical trial to evaluate the efficacy/safety and population pharmacokinetics of Benznidazole in children with chronic indeterminate Chagas Disease. The study is estimated to complete in March 2027.

Which segment based on drug class segment accounted for the highest demand in antiparasitic drugs market?

Antiprotozoals held major market share in 2019 owing to product approvals and the rising prevalence of malaria in tropical and subtropical regions during the forecast period.

What are the key factors driving the growth of the antiparasitic drugs market?

Major factors driving the growth of global antiparasitic drugs market include the increasing prevalence of parasitic diseases such as chagas disease, and research and development activities by major manufacturers.

What are the major challenges restraining the growth of the antiparasitic drugs market?

Which region held the largest market share in the antiparasitic drugs market?

The Africa antiparasitic drugs market is expected to generate highest revenue during the forecast period.