Asia Pacific Broadcasting Equipment Market is Expected to Surpass US$ 6,110.3 Mn by 2028

People’s Republic of China held dominant position in Asia Pacific broadcasting equipment market in 2020, accounting for 29.4% share in terms of volume, followed by India and Rest of Asia Pacific, respectively. Supported by rising demand for digital broadcasting. Increasing popularity of digital content and growing demand for the same is further driving market growth. 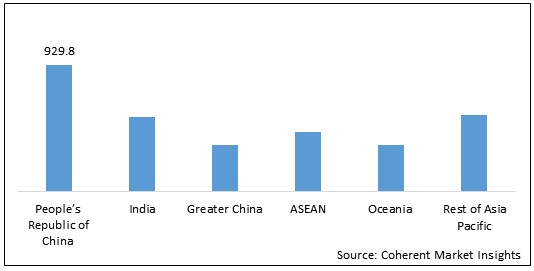 In Asia Pacific, production and media houses are realigning their capital expenditure on broadcasting equipment. Modern equipment is comprised of advanced software and supports open architecture. These solutions are more compatible with multiple standards and thus allow greater flexibility to media and production houses. Furthermore, there is a high demand for pay-per-usage that facilitates media and production houses to avoid any up-front installation costs for broadcasting devices. As a result of this, the capital expenditure of these organizations has been realigned, which in turn, is expected to drive growth of the market during the forecast period.

Consumers in Asia Pacific are increasingly demanding high-definition (HD) media content. Currently, broadcasters are increasingly focusing on HD content production and transmission. This, in turn, is driving the demand for equipment such as HD cameras and video servers. Thus, these factors are expected to propel the Asia Pacific broadcasting equipment market during the forecast period.

Currently, audiences watch video content outside the TV room on various devices such as laptops and smartphones. Broadcaster and media houses are broadcasting programs for niche and specific audiences rather than going for mass programming. Audiences are increasingly preferring to watch programming tailored just for them. To meet this changing demand of viewers, media houses are seeking customized broadcasting equipment from OEMs, hence creating vast opportunities for broadcasting equipment manufacturers.

Changing shift from HD to UHD

The media broadcast industry is witnessing notable changes in resolution and video quality, which is an effort to offer consumers ‘as-if-you-were-there’ experiences over the display devices on their choice. Transition from high-definition (HD) to ultra-high definition (UHD) has become common among all the technology and media industry professionals. Ultra high-definition services are expected to witness greater adoption and drive customer engagement, especially among sports fans. Meanwhile, consumers are turning to “second screens” on their smartphones and other mobile devices to broaden the scope of their viewing experiences.

Besides better image quality, consumers are increasingly preferring to access audio-visual content from any device, anytime, anywhere. While linear television still reigns supreme among home screens, content consumption continues through devices such as personal computers, laptops, smartphones, and tablets. This rising content demand from consumers mandates the broadcasting industry to keep up their infrastructure facilities at par with the anticipated demand. OTT players such as YouTube, Netflix, and Amazon Prime are playing a considerable role in driving the demand for consumer’s multi-screen freedom preference. As OTT platforms are maturing, broadcasters are looking to use the technology to engage viewers better. 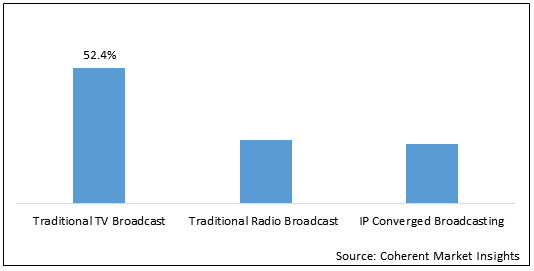 Global decline in the economy is affecting the broadcasting industry in Asia Pacific region. Furthermore, slowdown in China’s economy has also made negative impact on the market as China holds the dominant position in the Asia Pacific broadcasting equipment market. The media industry in the region is significantly dependent upon advertising revenue. Advertising and marketing budgets are reduced or diverted towards comparatively cheaper media channels, owing to the slowdown in economies across the Asia Pacific region. Hence, these factors are expected to restrain growth of the market during the forecast period.

Modern broadcasting equipment requires adequate support from existing infrastructure, in order to work properly. In Asia Pacific region, the penetration of electricity is slow in many countries, which creates a major challenge for broadcasters since these devices require sufficient and reliable power supply to function. Moreover, broadcaster often relies on generators for power supply, in order to combat power outages on the local gird, which results in additional cost. Thus, these factors are expected to restrain growth of the Asia Pacific broadcasting equipment market during the forecast period.

Major market players are focused on partnerships and collaborations, in order to enhance the market presence. For instance, in February 2020, Bridge Technologies Co AS, a Norway-based company, partnered with DEVO as its sales representative in the U.S.

Key companies in the market are involved in product launches, in order to gain a competitive edge in the market. For instance, in April 2019, ChyronHego Corporation launched ‘Fresh’, a graphics-rendering solution that integrates Epic Games’ Unreal Engine 4 with ChyronHego’s augmented reality and virtual set software.

Broadcasting, electronic transmission of radio and television signals that are intended for general public reception are directed to specific receivers. Digital broadcasting involves transmission of content (audience response) through internet. It may be done either live or recorded.

Launch of new products is expected to people growth of Asia Pacific broadcasting equipment market over the forecast period. For instance, in July 2021, Chyron, a brand of ChyronHego Corporation, announced the 4.1 release of the PRIME Live Platform that offers broadcast-quality production capabilities that are flexible and scalable.

Major players operating in Asia Pacific broadcasting equipment market are focused on adopting partnership strategies to enhance their market share. For instance, in October 2020, Media Excel and VUALTO, a solution provider for video delivery & orchestration, expand their strategic partnership to include sales and support services for Media Excel’s products in VUALTO’s regions of operation. Similarly, in February 2021, Bridge Technologies partnered with 2110 Solutions, a distributor and manufacturer’s representative operating throughout North America, under which 2110 Solutions will integrate Bridge’s VB440 into its product range, along with a number of the company’s other IP-based solutions.

What factors are influencing the adoption of broadcasting equipment in Asia Pacific?

Realignment in capital expenditure for broadcast equipment and high-definition (HD) production and transmission are factors boosting demand for broadcasting equipment in Asia Pacific.

Global decline in economy and restraints in advertising along with infrastructural changes such as lack of electricity and mismatch cabling are factors hindering growth of the market.

Traditional TV Broadcast held dominant position in the market in 2020.

Changing shift from HD to UHD and rising consumer demand for multi-screen freedom are trends in the market.