The global ATM managed services market is expected to witness significant growth during the forecast period (2020–2027) due to surge in debit card usage & demand for advanced ATM services. The penetration of debit cards has increased tremendously due to increase in several government initiatives towards financial inclusions, globally. Furthermore, consumers are now preferring more advanced and instant ATM services due to increased usage of debit cards. This surge of debit card usage is due to enhanced card security and offers on ATM transactions. For instance, according to a survey conducted by Stratagem Market Insights’ analysis projected that there is an increase in the adoption of debit cards to 60% in 2019 from 51% in 2018. Thus, all financial institutions and business entities invested in ATM managed services in order to increase the user experience in the market. For instance, in August 2014, the Government of India (GOI) started the scheme of opening a bank account at zero balance under PradhanMantri Jan DhanYojana (PMJDY). Due to this initiative, the number of debit card users and card transactions increased significantly. Banks are introducing new security techniques to verify that the physical card used by the user is real or duplicate. For instance, in January, Reserve Bank of India (RBI) mandated that banks need to upgrade their old magstripe cards to EMV cards. EMV chip cards offer features such as enhanced authentication, preventing unauthorized and fraudulent activities. Due to these features, people are opting for ATM cards, which further support growth of the ATM managed services market. Due to all these initiatives, the number of debit transactions is increasing and financial institutions are focusing on enhancing their ATM managed services to provide good services to consumers.

High cost of new technology for upgrading the ATMs has become a major concern in the market. The operating systems (OS) upgrade from Windows XP to Windows 10 or Windows 7 in all ATMs is very difficult. Windows 10 operating system offers various benefits such as security, remote support, and enhanced customer experience. All the financial institutions are migrating their ATMs to latest operating system to meet regulatory compliance. For instance, in January 2020, Microsoft planned to end support for a version of Windows and due to this, financial institutions shifted to the latest version of the operating system. All the financial institutions could not meet the deadline, as this required additional effort in terms of money and time. The cost incurred to upgrade the system depends on various factors such as age of the system, timing for replacement, and feasibility to upgrade. Technological advancements is one of the major factors that drive the ATM managed services market growth.

COVID-19 pandemic has impacted the banking industry, however has led to innovation in the ATM industry. Several ATM manufacturers are offering cardless cash withdrawals as there is increase in demand for contactless payments among consumers due to the current outbreak. For instance, according to London's RBR Study 2020, the number of cardless cash transactions across the globe rose by 10% in 2019. Various methods are introduced that allow card holders to withdraw cash from ATM without inserting a payment card. These methods include NFC & QR code readers, and biometric authentication. ATMs equipped with NFC & QR code readers are gaining huge popularity among the users due to the current pandemic outbreak. In QR code scanner technology, ATM displays an on-screen QR code scan and customer scans the code and can withdraw cash. The London's RBR Study 2020 also reveals that the number of ATMs equipped with these technologies increased by around 83% in the U.S. by 2019. Also, Ukraine and Poland are showing growth potential for ATMs equipped with NFC readers.

Also, biometric authentication is one of the latest innovation in the ATM industry. ATM manufacturers are offering ATMs with biometric identification. These methods include face recognition and palm screening methods for cash withdrawals at ATMs. For instance, in India, AGS Transact, one of the leading ATM managed services provider, developed touchless ATM solution that uses on-screen QR codes for cash withdrawal.

Asia Pacific held dominant position in the global ATM managed services market in 2019, accounting for 33.3% share in terms of value, followed by North America, Europe and rest of the world. 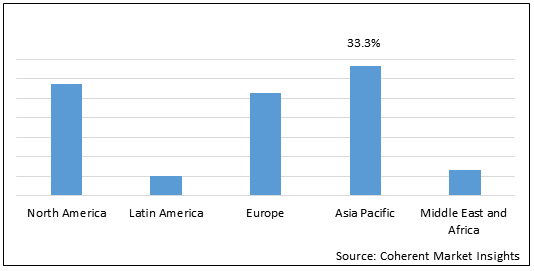 Asia-Pacific is expected to account for the largest market share during the forecast period. The adoption ATM managed services is expected to increase in China during the forecast period. This is owing to the increasing adoption of ATM devices in the country. According to Stratagem Market Insights analysis, in 2014, China overtook the U.S. ATM market with 750,775 units. As of 2018, the country had 924,177 registered ATMs, which is the highest number of ATMs (by number) in the world (country wise). Another factor contributing to the growth of the China ATM managed services market is rapid adoption of technology in the banking and finance sector. Many companies are collaborating with payment platforms to provide enhanced services to customers. For instance, customers can use the WeChat app, to withdraw cash from ATMs. Many mainstream banks such as Holdings plc., The Standard Bank of South Africa Limited, and others support WeChat services in China.

North America region is expected to exhibit highest growth during the forecast period, According to Stratagem Market Insights’ analysis, North America region is expected to be dominant in the global ATM managed service market during the forecast period. This is owing large network of ATMs in the U.S. and Canada. For instance, according to Bureau of Justice Statistics data, the U.S. had around 470,135 ATMs in 2018.

Furthermore, in the recent past, security concern for ATMs has increased in the U.S. For instance, in 2018, according to a report published by the Federal Reserve System, a central banking system of the U.S., there was a sharp growth in chip-authenticated card frauds, from 3.2% in 2015 to 26.4% in 2016. Therefore, due to security concerns, government of the U.S. increased ATM security and regulatory compliance, which needs to be fulfilled by the ATM

The demand for big data analytics in the banking sector is expected to drive market growth during the forecast period. The demand for data analytics is increasing in the financial industry. This is attributed to the latest technological advancements in ATMs and increase in banking transactions through video technology/remote teller technology. There is a significant increase in customer adoption of self-service channels, which, in turn, increases demand for data analytics in the ATM industry to understand consumer behavior and preferences. These tools are used by many companies to forecast demand and to provide good services to the consumers. For instance, in July 2017, DBS Bank Ltd. used analytic techniques such as cloud computing, artificial intelligence, and data analytics to make better decisions, forecast market trends, and provide good customer experience. Furthermore, financial institutions are deploying advanced data models to produce a wide range of customized statistics and are focused on customer satisfaction by analyzing their behaviors through advanced techniques. For instance, in October 2019, Diebold Nixdorf expanded its product portfolio with a new managed mobility service that provides real-time business analytics to get data insights and help in decision-making to optimize business processes and enhance consumer experience.

The rising usage of internet connected devices ATMs is also driving the market growth during the forecast period. The need to get smarter by integrating smart technologies such as near field communication (NFC) and QR codes to offer better experience to the smartphone users. This will mitigate fraud activities such as card skimming and card trapping. For instance, in September 2019, according to the data collected by the Reserve Bank of India (RBI), Indian banks lost 14.5 million due to theft and online fraud. Furthermore, the integration of ATM with smartphones offer many services to financial institutions such as save transactions for future reference, provide quick transactions from previous history, card less ATM access through mobile phones, and others, which helps financial institutions to be on par with digitalization.

What is the expected market size of ATM managed services market in 2022?

What is the expected compound annual growth rate (CAGR) of the ATM managed services market during the forecast period (2020-2027)?

The surge in debit card usage & demand for advanced ATM services is expected to drive growth of the ATM managed services market during the forecast period.

Based on ATM type, which segment held the largest market share in the market in 2019?

The cash dispenser ATM segment held the largest market share among ATM Type, contributing 49.6% in terms of value in 2019.