Lime is also referred to as calcium hydroxide, is derived from the limestone such as quicklime and hydrated lime. Lime find application in building and engineering materials such as limestone product, concrete, cement, and mortar. Lime is also used in wastewater treatment with ferrous sulfate. Moreover, it is also used across industrial application such as the food industry, construction, and steel industry. Furthermore, lime also find application in the agriculture sector and is highly important for the production of sugar.

The growing mining industry in Australia is projected to foster market growth over the forecast period. According to Geoscience Australia, in 2016 there were around 370 operating mine sites in the country, of which approx. one third is located in Western Australia (WA), one quarter in Queensland (QLD) and one fifth in New South Wales (NSW), making them the three major mining states.

The rising demand for lime from the wastewater treatment industry in Australia is projected to propel the market growth. Growing environmental concerns and strict government rules for recycling of water, especially in industries are raising the adoption of various water and wastewater treatment plants in the country. Moreover, lime is also used as a water softener which is further anticipated to propel market growth over the forecast period. 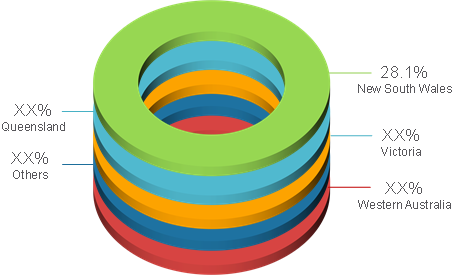 The decrease in the farm production due to fluctuating climate and other environmental issues in the Australia is expected to hinder the market growth of the lime over the forecast period. According to The Australian Bureau of Agricultural and Resource Economics and Sciences Australian agricultural production and exports are expected to decline in 2018–19 as a result of dry seasonal conditions in the eastern states due to ongoing drought and flooding in northern Queensland have been adversely affected the farm production in Australia.

Increasing production of cement and clinker in Australia is expected to foster market growth. In 2017-18 the Australian cement the industry recorded a turnover of a US$ 2.4 billion. Therefore, rising production of cement and clinker in the Australia due to booming the construction industry in the region is expected to propel the market growth over the forecast period.

Expanding pulp and paper industry in the Australia region is expected to propel the market growth over the forecast period. According to the Australian Industry and Skills Committee, during 2018 the industry was made up of 679 manufacturing businesses and 1,057 paper product wholesaling businesses and The Pulp and Paper industry contributed US$ 3.7 billion to the Australian economy in 2018. Hence, increasing pulp and paper products in the region is expected to fuel market growth.

Based on application, Metallurgy emerged as the leading segment the Australia lime market in 2018, accounting for 31.1% share in terms of value, followed by building materials and agriculture, respectively.

The rising number of collaboration in the region is a major trend that has been observed in the market, this factor is expected to augment the market growth of Australia lime. For instance, in August 2019, Graymont and Grupo Calidra have agreed to purchase the global lime and limestone business of the Belgium-based Sibelco group. The purchase includes operations located across the Asia-Pacific region in Australia, Malaysia, Indonesia, the Philippines, and South America in Argentina and Chile.

Growing demand for lime in the production of pigment and as filler in the more expensive paints is expected to propel the market growth. Moreover, the growing application of lime in the wood industry where lime is used as a neutralizer to neutralize the acid during the process. Furthermore, rising demand for lime from dyes and carpeting floors such as protective coatings is further anticipated to foster the growth of the Australia lime market. 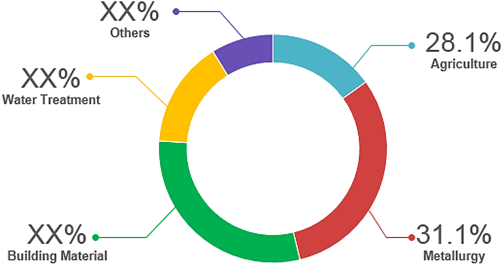 Lime is an inorganic mineral derived from Limestone. Its chemical name is Calcium Hydroxide (CaOH). Lime is used in building and construction materials abundantly as well as used in various industries such as in agriculture, water treatment plants, steel manufacturing industry, metallurgical industry and others.

On basis of its application, Australia lime market is segmented into mining & metallurgy, building material, agriculture, water treatment and others. The rise in demand for lime in Australia’s Mining & metallurgy industry has fueled the market growth in recent past years, owing to the physical and chemical properties of lime which are essential for clearing the impurities from metal in steel industry.

Many areas in Australia possess high acidic content in the soil which causes toxicity in crops. Therefore, a surge in demand for Aglime (agricultural lime) is observed in agriculture industry in the country. Lime is used as a neutralizer for acidity in the soil and thus it maintains a healthy pH level which is suitable for the crops.

What are the growth estimates for the Australia lime market till 2027?

Which are the prominent Australia lime market players?

What are the key factors hampering growth of the Australia lime market?

The low cost of the import lime and clinker, coupled with decrease in the farm production due to fluctuating climate and other environmental issues in the Australia are some of the major factors to hamper growth of the market over the forecast period.

What are the key factors driving growth of the Australia lime market?

What is the Compound Annual Growth Rate (CAGR) of Australia lime market for next 8 years?

Which region/country held the largest market share in the Australia lime market?

Among regions, New South Wales held a dominant position in the Australia lime market in 2018, accounting for 28.8% market share in terms of value and is expected to reach US$ 81.5 billion in terms of revenue by 2027, followed by Victoria and Queensland, respectively.

Microcell is a type of small cell in the phone network served by low power base station (antenna) and covers a limited...

Teak (Tactona grandis) is one of the most valuable quality timber known for its mellow color and durability. Teak has ...

The basic purpose of any roofing system is to provide protection against direct sun light, snow fall, heavy rain, and ...

Ceramic tiles are increasing being adopted by the residential sector. These tiles are usually made of sand, clay, or o...