Press Release: Automotive Internet of Things Market to Generate Revenue of US$ 165.5 Billion by 2025

Automotive Internet of Things Market to Generate Revenue of US$ 165.5 Billion by 2025

IoT aids in converting large volume of data into meaningful and actionable knowledge and aids in increasing transportation efficiency, automotive safety etc. Rising demand for improving driver’s comfort, safety of passenger, and others has led to increasing adoption of IoT in the automotive sector. Various application of IoT in automotive include intelligent transportation systems, self-driving (autonomous) cars, smart fleet management etc. and increasing demand for these has led to growth of the market.

One of the major factors for automotive collisions is human errors. According to Coherent Market insights, around 90% of automotive crashes in the U.S. are caused due to human errors. In order to reduce collisions due to human error, manufacturers are focusing on developing self-driving vehicles. For instance, Alphabet Inc. — the parent company of Google, Inc. —invested US$ 1.1 billion for the development of self-driving cars in the period of 2009–2015.   These vehicle sense its environment and navigates without human input, thus reducing the chances of crashes.  According to Coherent Market Insights analysis, 10% of self-driving vehicles of the total vehicles could decrease deaths by 1,100 in the U.S. caused due to collision and save US$ 38 billion per year. Moreover, according to World Health Organization, over 37,000 people dies in road crashes per year. In addition to this, self-driving vehicle and intelligent transportation systems aid in reducing fuel consumption and also autonomously plot alternate routes in order to avoid traffic bottlenecks. This has also led to rising demand for IoT in the automotive industry. According to Coherent Market Insights, In the U.S., a commuter spends 38 hours every year stuck in traffic, leading to additional consumption of 2.9 billion gallons of fuels. 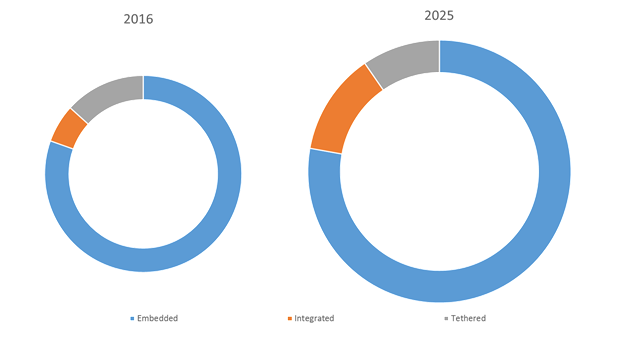 North America held the dominant position in the market in 2016

North America held a dominant position in the market in 2016 and is projected to retain its dominance throughout the forecast period. The U.S. and Canada are the major growth engines in the region. Increasing deployment of driverless cars is one of the major factors for growth in this region. For example in 2017, Volvo have announced that they will supply 24,000 self-driving cars to Uber. Moreover, presence of leading companies in this region is another driving factor for growth of the automotive IoT market in this region for example Apple, Inc., AT&T Inc, Cisco Systems, Inc etc.

Asia Pacific is projected to be fastest growing market for IoT automation over the forecast period, with India, China, and Japan positioned as the major growth engines in the region. This is mainly attributed to increasing consumer spending power and the region emerging as one of the largest manufacturing hubs for automotive.

Automotive IoT, as the name suggests, is the integration of IoT invehicle vehicles, allowing for in-vehicle, vehicle-to-vehicle, and vehicle-to-infrastructure communication. Increasing consumer inclination towards autonomous driving vehicles is one of the major factors for growth of the automotive IoT market over the forecast period. Driverless cars require large volume of data for analysis and are connected with cloud based traffic and navigation services, which aids them in navigating on roads. This has led to increasing demand for internet connectivity in automotive vehicles.

Rising demand for Internet in automotive vehicles, owing to increasing application in infotainment system, navigation system, and telematics systems is one of the major factors for growth of the IoT in the automotive industry. According to Coherent Market Insights, it is projected that by 2020 around 250 million cars would be Internet connected, globally. In addition to this, high investment in autonomous cars by various market leaders is also expected to be another factor for growth of the market. For instance, in 2017, SoftBank Group Corp.—a Japan-based telecommunication company—General Motors, and BMW invested US$ 159 million in Nauto— a U.S.-based driverless car startup.

*Browse all the market data tables and figures on "Global Automotive Internet of Things Market - Global forecast to 2025”.

*Browse all the market data tables and figures on "Automotive Internet of Things Market - Global forecast to 2025”.

What are the growth estimates for automotive internet of things market till 2025?

The global automotive internet of things market is estimated to reach US$ 165.5 Billion by 2025

Which are the prominent automotive internet of things market players across the globe?

Which segment based on connectivity form factors, accounted for the highest demand in the automotive internet of things market?

Among connectivity form factors, embedded segment held a dominant position in 2016 and is estimated to retain its dominance throughout the forecast period.

What are the key factors driving growth of the automotive internet of things market?

Increasing product launches for reagents to assist different types of diagnostics tests and research purposeis one of the major factors that is expected to propel growth of the market over the forecast period.

What is the Compound Annual Growth Rate (CAGR) of the automotive internet of things market for next 8 years?

The global automotive internet of things market is estimated to exhibit a CAGR of 26.57% over the forecast period.

Which region held the largest market share in the automotive internet of things market?

Among regions, North America held dominant position in the market in 2016 .