Press Release: Bioactive Protein and Peptides Market to Surpass US$ 88.3 Billion by 2027

Bioactive Protein and Peptides Market to Surpass US$ 88.3 Billion by 2027

Bioactive peptides and proteins are derived from food and possess health-promoting properties and can be classified into antihypertensive, antibiotic, anticancer, and antioxidant. Peptides are released during the breakdown of protein that contains different amino acids. Some of which are bioactive and this peptide may get attached to receptors in the intestine after food being absorbed in the digestive tract. Some of the bioactive protein may also get into the bloodstream where they can produce their beneficial effects on the body. Some of the bioactive peptides are also derived from spirulina as it is known for high protein content and excellent therapeutic properties.

Growing disposable income of the population is encouraging them to spend on functional foods and beverages is expected to propel the market growth of bioactive peptides and proteins. According to the Coherent Market Insights, global per capita spending on food consumption through nutritional sources was accounted for 2,940 Kilocalories in 2015. Therefore, this increase in disposable income and per capita rise in food expenditure has boosted the growth of global bioactive proteins and peptides market.

Growing demand for bioactive proteins and peptides in cosmetics and personal care products is expected to foster market growth. Proteins are known for providing strong moisturizing in cosmetic products. Moreover, proteins derived from animal segments were being also used as cosmetic ingredients. Therefore, expanding the application of bioactive protein and peptide in cosmetic and personal care products is accelerating the market growth over the forecast period.

High investment cost in licensing and regulatory processes, resulting in an overall increase in operational cost for the manufacturer. According to the Coherent Market Insights, market players in the North America region has to provide in-depth information on the technical data, structural modifications of genetically modified microorganisms (GMMs), and the manufacturing and purification process to the FDA government for grant of the generally recognized as safe (GRAS) status. Therefore, high investment cost in the regulatory process is hindering the market growth.

The rising application of bioactive peptides and proteins in the production of powders and bars is expected to foster market growth over the forecast period. For instance, in August 2018, Herbalife Nutrition has announced the introduction of the Herbalife24 Achieve Protein Bar that offers 20 grams of high-quality whey and milk protein, made with whole food-derived ingredients. This new product was developed to meet the demands of all athletes including elites, weekend warriors and every day looking to live a healthier and happier life.

Increasing adoption of growth strategies such as partnerships by major players in order to expand their presence in the market and fulfill the rising demand for the peptide-based dietary supplement is accelerating the market growth. For instance, in January 2019, Nuritas and Pharmavite enter into partnership on bioactive peptides in supplements. The partnership plans to leverage Nuritas’ technology platform, which combines AI and DNA analysis to forecast, unlock and validate bioactive peptide ingredients. 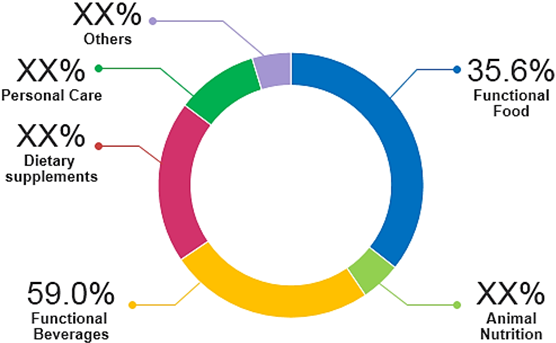 On the basis of application, in 2018, functional food accounted the largest market share of 35.6% in terms of revenue, followed by functional beverages and dietary supplements, respectively.

In the U.S, the Food and Drug Administration (FDA) forms and regulates nutraceuticals including protein and peptides. FDA is authorized to take action against any unsafe product after it reaches to market place. Moreover, manufacturers are not obliged to register their product with the FDA or get the approval of the FDA before selling nutraceutical products to market, but if it's found any misleading or unmatched information as described in the product label. FDA has the authority to cancel the license of that manufacturer

Bioactive proteins and peptides are organic substances which are formed by amino acids. It has been defined as specific protein fragments which have helps to curing of diseases and provides health benefits to living organisms. In addition to this, the bioactive peptides also plays an important role in physiological functions. Owing to these factors,  bioactive protein and peptides finds its application in various industries such as personal care, food & beverages and others.