Biosensors are integrated devices, which are capable of providing analytical information using biological samples. They are used to identify the structure and function of molecules, such as DNA and protein, and for medical diagnosis. Biosensors are largely employed in applications such as disease monitoring, drug discovery, disease-causing micro-organisms, and markers that are indicators of a disease in body fluids such as blood, urine, saliva, and sweat.

Increasing prevalence of chronic diseases is expected to propel growth of the global biosensors market over the forecast period. For instance, according to the study, “Global and regional diabetes prevalence estimates for 2019 and projections for 2030 and 2045: Results from the International Diabetes Federation Diabetes Atlas, 9th edition”, published in the journal Diabetes Research and Clinical Practice, in September 2019, 463 million people are expected to suffer from diabetes in 2019 worldwide and the number is expected to reach 578 million by 2030 and 700 million by 2045.

North America held dominant position in the global biosensors market in 2019, accounting for 38.5% share in terms of volume, followed by Europe and Asia Pacific, respectively. 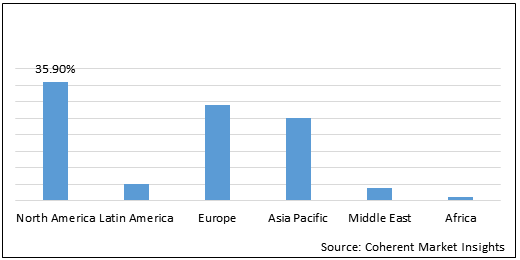 Low awareness about point-of-care diagnostic devices is expected to hinder growth of the global biosensors market.

Moreover, high cost of the wearable biosensor devices is also expected to limit the market growth. 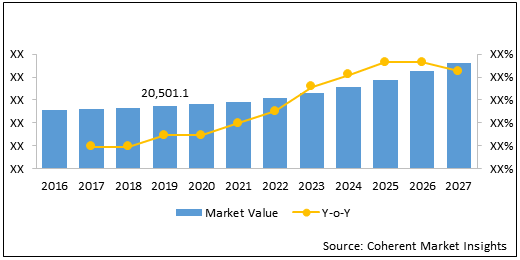 Major players in the market are focused on expanding their manufacturing capacity. For instance, in March 2018, Nemaura Medical, Inc. expanded its manufacturing facilities for large scale production of its new SugarBEAT CGM system.

Increasing prevalence of cardiovascular disease (CVD) is expected to propel growth of the global biosensors market over the forecast period. For instance, according to the American Heart Association's Heart and Stroke Statistics 2019 Update, around 48% of all adults in the U.S. suffered from some type of CVD in 2016.

Major players in the global biosensors market are focused on adopting collaboration and partnership strategies to expand their product portfolio. For instance, in August 2020, Efferent Labs collaborated with W. L. Gore & Associates for R&D in implantable biosensing for long-term chronic disease management.

A biosensor is a device that measures biological or chemical reactions by generating signals proportional to the concentration of an analyte in the reaction. Biosensors are largely employed in applications such as disease monitoring, drug discovery, disease-causing micro-organisms, and markers that are indicators of a disease in body fluids such as blood, urine, saliva, and sweat. Increasing prevalence of diabetes and cardiovascular diseases, and increasing demand for cost-effective, disposable, and user-friendly devices are the factors driving growth of the biosensor market.

Electrochemical segment held the major market share in 2019 owing to an increasing technological advancement along with rapid increase in medical devices industry is expected to propel growth of the market.

Which are the key factors driving the growth of the Global Biosensors market?

Major factors hampering the growth of the Global Biosensors market during the forecast period constitutes of contamination of product recalls.

Which region held the largest market share in the Global Biosensors market?