Press Release: Bitumen market to Surpass US$ 121 Billion by 2027

Bitumen is also referred to as asphalt compound that is obtained through distillation of crude oil that removes the lighter crude oil components such as diesel and gasoline, the heavier bitumen is left behind. Bitumen is consist of complex hydrocarbons and other compounds such as sulfur, calcium, iron, and oxygen. It is widely used as building materials and find application across construction and other industries. This material is mostly used in the road paving application as most of the roads are made up of bitumen or a mixture of bitumen and aggregates, this includes concrete.

The global bitumen market is estimated to account for approximately US$ 121 Billion in terms of revenue volume by the end of 2027, growing at a CAGR of 5.2% during the forecast period (2019-2027)

Rising demand for bitumen as an additive across solvents and black paints application as it helps to enhance the efficiency of the paints and coatings by providing improved viscosity to waterproofing agents. Rising usage of chemically prepared bitumen as an additive across the various industrial application is projected to fuel the market growth of the bitumen. Moreover, bitumen also have better adhesion property when combining with organic amides and amines, which is fueling its demand across various industries, thereby augmenting market growth of bitumen.

Production of bitumen from oil sands requires 2-4 barrels of fresh water in order to extract 1 barrel of bitumen or synthetic crude oil which is projected to curb the market growth of bitumen. Moreover, bitumen with impurities used in road pavement can cause soil pollution and bitumen pavement has low tensile strength as compared to concrete pavement. This factor is expected to restrict the market growth.

Increasing adoption of the alternate of the bitumen such as concrete roads and pavements due to their high tensile strength and other advantage is expected to negatively impact the market growth of bitumen. For instance, according to the Coherent Market Insights, in September 2013, the Indian government decided to abandon bitumen in road construction projects, especially for national highways to increase the life of roads and in turn decided to opt for cement in road construction.

Increasing application of bitumen in anti-corrosive paints such as waterproofing of boats & ships and terraces is expected to offer lucrative growth opportunities over the forecast period. Moreover, bitumen paints are also used in protective coatings, wood, steel, concrete, timber, and others. Hence, rising demand for anti-corrosive paints from end-use industries such as furniture, marine, aviation, and construction is expected to fuel the market growth of bitumen.

On the basis of product type, in 2018, paving grade accounted the largest market share of 57% in terms of revenue, followed by oxidized grade and bitumen emulsion. The demand for paving grade bitumen is expected to rise in forthcoming years due to increase in its usage for making pathways, railway beds as well as in road maintenance. 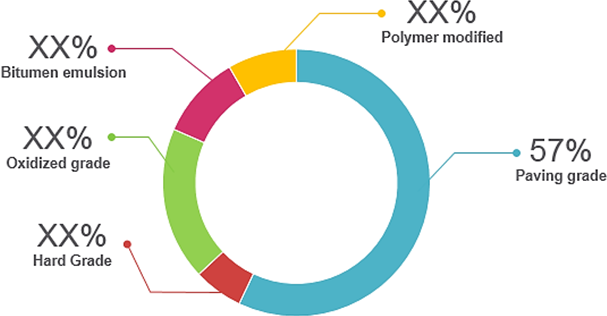 The increasing trend of launch of innovation in bitumen product by major players is expected to augment the market growth of the bitumen. For instance, in March 2019, Shell has introduced a new bitumen product that can help reduce the impact of asphalt production and paving on local air quality. Shell Bitumen FreshAir has been shown to help reduce emissions of specific gases and particulates from asphalt mixtures during production and paving by an average of 40% when compared to conventional bitumen.

Rising investment for the production of bitumen by major players in order to meet the rising demand is expected to hinder the market growth of the bitumen over the forecast period. For instance, in September 2018, Gulf Petrochem Group has committed to invest close to US$ 508 million for setting up a bitumen refinery in Gujarat for A Sharjah-based oil Production Company. Hence, rising such investment by major players is expected to propel the market growth. 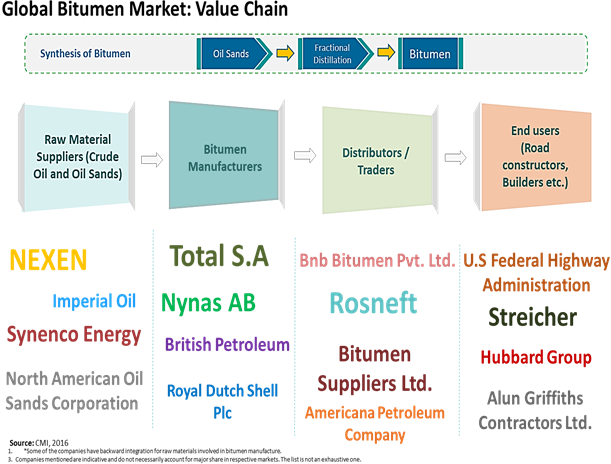 Bitumen is a highly viscous organic liquid which is derived from the residual products of the petroleum refineries.Due to its binding properties and bitumen is primarily utilized for road construction and repairs. In recent few years, Bitumen witnessed an expansion of its applications, for instance, it is used as a binder for waterproofing purpose in ships and terraces as well as a mixing agent for printing inks, paints and protective coatings.

On the basis of region, Asia-Pacific has witness a surge in demand for bitumen products for producing asphalt, which is then utilized for road construction & maintenance, owing to the expansion in infrastructure activities, rapid urbanization, emerging consumer goods industry in the region and rising demand for efficient transportation facilities.

Manufacturers are now focused on various developments in production technology of innovative bitumen products. Different materials such as rubber polymers, thermosetting and thermoplastic polymers are being added to bitumen, mechanically or chemically, to enhance its elasticity and strength. These innovations are expected to propel the bitumen market in forthcoming years.

What are the growth estimates for bitumen market till 2027?

The global bitumen market is estimated to reach US$ 121 Billion, in terms of revenue by the end of 2027.

Which are the prominent bitumen market players across the globe?

What are the key factors hampering growth of the bitumen market?

The increasing adoption of alternate of the bitumen such as concrete roads and pavements due to their high tensile strength is one of the major factors that is expected to hamper growth of the market over the forecast period.

What are the key factors driving growth of the bitumen market?

What is the Compound Annual Growth Rate (CAGR) of the bitumen market for next 8 years?

Which region held the largest market share in the bitumen market?

Among regions, Asia Pacific held a dominant position in the global bitumen market in 2018, accounting for 31% market share, in terms of revenue, followed by North America and Europe, respectively.