Increasing demand for Sodium Bromide (NaBr) as a catalyst in TEMPO-mediated oxidation reactions as NaBr is highly stable and is, thus, used with other solutions of bromides and chlorides which is expected to offer the lucrative opportunity to the market bromine derivative. Moreover, it is also used in the generation of chemical sensitivity and the purification of water. Hence, such emerging application is expected to boost the market growth of bromine derivatives.

Rising usage of bromine-based oxidizing biocides for cooling towers, swimming pools, sanitary disinfection, and treatment of municipal sewage is expected to augment the market growth over the forecast period. Rising investment by developed countries such as North America is also projected to fuel market growth. For instance, in July 2018, Lanxess announced multiple project expansion plans across the region by 2022, which also includes an investment of USD 60 million in the global bromine reservoir site. 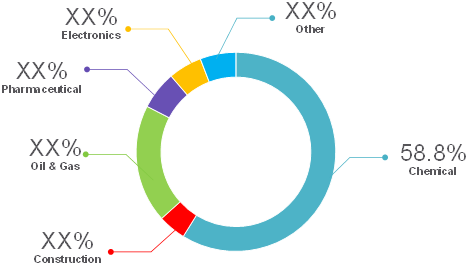 Bromine is chemical compound with similar properties that of iodine and chlorine. Bromine derivatives find its applications in chemical synthesis, completion fluids and oil & gas well drilling, beef and poultry processing, paper manufacturing, water purification, and others industrial applications. Growing demand for bromine derivatives in controlling mercury emission coupled with surging end-use industry such as pharmaceutical, agriculture, construction, and chemical industry is to propel the demand for bromine derivatives market over the forthcoming years.

On the basis of region, Asia Pacific accounted for the largest share, in terms of revenue in 2018 and contributed for 51.2% in 2018, followed by North America. The regional growth is driven by the rising demand for bromine derivatives from various end-use industries. The growth of end-use industries is anticipated to act as major driver for increasing the demand for bromine derivatives in the Asia Pacific.

“*” marked represents similar segmentation in others categories in the respective section.

Dolomite is a type of limestone, a type of sedimentary roc...

Azelaic acid is an organic compound with molecular formula...

Elemental fluorine is a gas that is highly toxic and react...