The global Chlor-Alkali market size was valued at 247874.3 KT in 2021 and is anticipated to witness a compound annual growth rate (CAGR) of 3.11% from 2022 to 2030. Various factors such as the rise in demand for soaps and detergents, the growing demand for chemicals, and the increase in demand for chlorine-based Chlor-Alkali are driving the global chlor-alkali market growth. The major factors driving the growth of the market are the growing demand for chemicals, and the rise in the population of emerging economies such as China and India. The rise in GDP, and the increasing per capita income of the population in these countries are also expected to stimulate the market growth. The growth in the manufacturing industry is further expected to boost the demand for Chlor-Alkali.

At the same time, North America is also expected to witness fastest growth over the forecast period owing to the powerful economy in the region such as US and Canada. According to International Monetary Fund forecasts, the GDP of the United States is expected to grow to 6.4% in 2021, as the country recovers from the pandemic situation 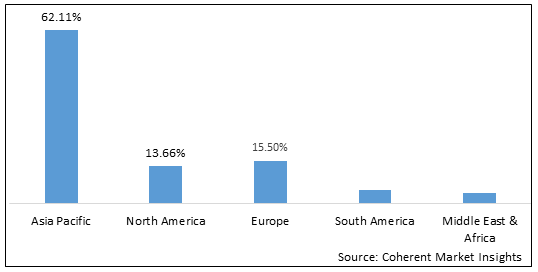 Growing demand for caustic soda and its derivatives is primarily fuelling growth of the chlor-alkali market. Increasing use of caustic soda in textiles, paper and pulp, soap and detergents, aluminum, organic and inorganic chemicals, etc. is propelling market growth.

Increasing production capacity of chlor-alkali by key players is again projected to foster the market growth. For instance, in 2018, AkzoNobel Specialty Chemicals and Evonik Industries have started production at their new joint venture to produce chlorine.

Increasing demand from water treatment to forestalling water and air contamination application is expected to provide lucrative growth opportunities for key players. According to the United Nations Educational, Scientific, and Cultural Organization (UNESCO), global water consumption has increased by around 6 times in the last 100 years, and the world is likely to face a 40% water deficit by 2030 and an investment of around USD 6.7 trillion is required during 2020-2030 in order to prevent water scarcity, and a significant amount of this expenditure is needed to be invested in water and wastewater treatment plants and chemicals.

Rising disposable income and the growth in the industrial and automotive sector are the major growing trend in the global market. In addition, the rising urbanization is also expected to drive the growth of the chlor-alkali market.

Growing adoption of business growth strategies such as partnership and acquisition among key players for geographical expansion is another major trend observed in the market. For instance, in April 2022, India’s Reliance Industries signed agreement with TA’ZIZ for Ruwais chemicals project for Chlor-alkali.

Strict environmental regulations due to negative impact of this process on the environment is expected to hamper the market growth. The chlor-alkali process uses chlorine, oxygen and sodium chloride as raw materials. The chlor-alkali industry is one of the most energy intensive industries in the world. It uses about 10% of global electricity. As a result, chlor-alkali emissions have been considered a serious environmental issue.

Unfavorable condition arising due to the negative impact of the Covid-19 on the global economy is again expected to hinder the global chlor-alkali market. 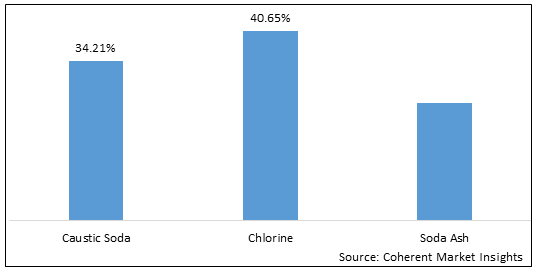 Based on product, the market is segmented into Caustic Soda, Chlorine, and Soda Ash. Out of which, Caustic Soda is expected to dominate the global market over the forecast period and this is attributed to the fact that it is one of the cheapest and widely used alkalies in the chlor-alkali process.

Chlorine segment is also expected to witness significant growth in the near future. The chemical kills bacteria and is widely used to treat drinking water and swimming pool water.

Based on production process, the market is segmented into Membrane Cell, Diaphragm Cell, and Other Production Processes. Out of which, Membrane Cell is expected to dominate the global market over the forecast period owing to its energy efficiency, inexpensive cell operation, low capital investment, and ability to achieve high purity caustic solution.  Moreover, they are eco-friendly solution also.

Diaphragm Cell segment is also expected to witness significant growth in the near future. It is a second highest process used to produce caustic soda. Additionally, this process consume low energy.

Based on application, the market is segmented into Pulp and Paper, Organic Chemical, Inorganic Chemical, Soap and Detergent, Alumina, Textile, and Other Applications. Out of which, Pulp and Paper is expected to dominate the global market over the forecast period and this is attributed to the fact that caustic soda is widely used in pulp &paper industry for digesting wood in order to create wood pulp. In addition, it is widely used as bleaching agent for neutralizing bleached pulp & paper.

Inorganic Chemical segment is also expected to witness significant growth in the near future and this is owing to the growing chemical sector worldwide.

In July 2021, Ciner Group planned to invest EUR 100 million to increase soda ash capacity by 600 thousand tons because of increased demand after the pandemic.

In June 2019, Şişecam Group and Ciner Group announced an equal production partnership contract for the production of natural soda in the United States.

In April 2020, Covestro AG innovated a new technology for chlorine production called the Oxygen Depolarized Cathode (ODC). It is based on the conventional membrane method, which uses rock salt, water, and electricity to form chlorine, caustic soda, and hydrogen. The ODC process replaces the usual hydrogen-producing electrode with an oxygen depolarized cathode. This suppresses the formation of hydrogen, leaving only chlorine and caustic soda lye. This process can produce 30% more chlorine and reduce energy consumption and carbon dioxide emissions by 25%. Currently, Covestro is constructing the first large-scale production plant based on ODC technology at its Spanish site in Tarragona.

*Definition: Chlor-alkali is widely used chemical that is primarily used in manufacturing of a variety of chlorine-based products. In addition to this, chlor-alkali is also used to produce chlorinated paraffin, sodium chloride, and hydrogen gas. As such, this chemical finds applications in a number of end use industries such as pharmaceuticals, personal care, beauty, and the metal and pulp industries.

The chlor-alkali process is a process that produces chlorine and hydrogen. In addition to providing chlorine and hydrogen, chlor-alkali chemicals are used as a feedstock in numerous chemical processes. This process plays a critical role in the chemical industry and its products are used in over 50% of all industrial chemical processes. The chlor-alkali process uses chlorine, oxygen and sodium chloride as raw materials. The chlor-alkali industry uses a variety of electrolytic cells. Most chlor-alkali plants today use membrane cells. These membrane cells have advantages over mercury cells, such as low toxicity, good energy efficiency and mercury-free operation. They are able to produce higher value gases, such as oxygen and hydrogen, and can be coupled with other systems.

Increasing demand from various end-user industries such as food and beverage, construction, pharmaceuticals, and textiles is expected to boost the chlor-alkali market. In addition, surging construction activities and a growing demand from the paper packaging industry are also expected to drive the market growth. Chlor-alkali companies are working to increase their market share by investing in research and development, product development, and expansion of production facilities. In addition, several companies are entering into strategic alliances to enhance their offering to their customers. Moreover, several closed manufacturing facilities are being set up to manufacture chlor-alkali chemicals, which will play a vital role in the market's growth over the forecast period.

On the other hand, the chlor-alkali market is expected to hamper by several factors such as government regulations, the cost of raw materials, labor cost, and the availability of energy resources.

Growing demand for caustic soda and its derivatives and increasing production capacity of chlor-alkaliare are fuelling the market.

The Chlorine segment is the leading component segment in the market.

Strict environmental regulations and unfavorable condition arising due to the negative impact of the Covid-19 are the major factors restraining market.