Press Release: Cigars & Cigarillos Market to Surpass US$ 25.2 Billion by 2027

Cigars & Cigarillos are rolled tobacco that is wrapped in leaf tobacco and is different from cigarettes. Cigarillos, cigars, and little cigars are the three major types of cigars that are available in the market. Cigar usage is higher among young adults who use tobacco products. These products are also available in different flavors such as mint/menthol, fruit/candy, and chocolate. Cigars & Cigarillos are machine-made products and involve herbal and botanical infusion. However, hand-made cigars are available in the market.

The global cigars & cigarillos market is estimated to account for US$ 25.2 billion in terms of revenue, growing at a CAGR of 3.0% during the forecast period (2019-2027)

The high cost of cigars and cigarillos than other tobacco products is expected to hinder the market growth over the forecast period. For example, according to the Coherent Market Insights, the retail cost of a box of five premium cigars varies between US$ 120 to over US$ 230. Thus, the availability of other alternative tobacco products such as cigarettes and chewing tobacco at lower prices is projected to restrict the market growth of Cigars and cigarillos.

Rising awareness regarding the healthy life>

Expanding distribution channel for easy availability of cigars and cigarillos to the consumer is expected to show lucrative growth opportunities in the near future. For instance, in January 2017, RICH Cigars, Inc., a manufacturer of high-quality premium cigar products, proudly announced, that the Company has begun an effort to expand its market by achieving various State approvals to broaden its ability to directly wholesale to retailers the RICH brand’s core line of cigars. This factor is expected to propel the market growth.

The rising launch of innovation in cigar products is expected to augment the market growth of Cigars & Cigarillos over the forecast period. For instance, in July 2019, Habanos, S.A., through its exclusive distributor for Switzerland, Intertabak AG, will launch in world premiere the new cigar band of the Punch brand, Short de Punch (clamp or diameter of 5 per 120 millimeters long). The Punch brand of cigars incorporates for the first time the 50 Clamp in its portfolio, thus expanding the exquisite flavor of the brand.

An increasing the number of collaboration among new players in the market in order to meet the rising demand for a cigar is expected to accelerate the market growth over the forecast period. For instance, in June 2019, European company Royal Agio Cigars has collaborated with cigarmaker Litto Gomez of La Flor Dominicana fame for a new brand that will be showcased at Royal Agio’s booth during the upcoming trade show: the Balmoral Paso Doble. The new cigar is made at Gomez’s Tabacalera La Flor S.A. factory in the Dominican Republic and combines tobaccos from the inventories of both Gomez and Royal Agio.

The Tobacco Products Labeling (TPLR-CLC) Regulations came into force in September 2011. The TPLR-CLC requires a health warning on at least 75% of the front and back panels, a qualitative toxic emissions statement on a side panel, and a health information message to be included either on the upper slide-flap, the exterior surface of the slide, or on a leaflet inserted in the package.

On the basis of product type, in 2018, cigarillo segment, accounted the largest market share of 77.6% in terms of revenue, followed by Cigar and Little Cigar, respectively. 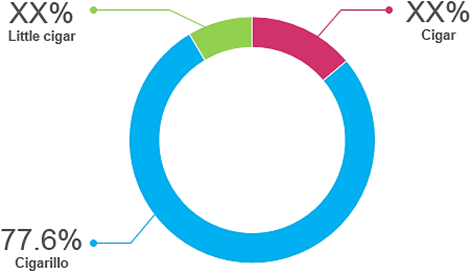 Cigars and cigarillos are made by tight rolling of dry fermented tobacco leaves. These are of available in a variety of sizes, category, and flavours according to the consumer preferences. Consumption of Cigars and cigarillos is a rising trend among both young and adult people as they are now considered as a status symbol in society. Consumers are willing to pay more for their particular preferences in flavour and size.

Based on category, the market is segmented into mass cigar and premium cigar. Wherein, in 2018, mass cigar accounted for largest market share in terms of revenue and contributed for more than 90.0% of the global cigars & cigarillos market. Furthermore, premium is projected to record fastest growth over the forecast period (2019 to 2027).

Among region, North America dominated the global market for cigar & cigarillos market and contributed for a revenue share of about 40.0% in 2018, followed by Europe and Latin America.

What are the growth estimates for the cigars and cigarillos markettill 2027?

The global cigars and cigarillos market is expected to reach US$ 25.2 billion in terms of revenue by 2027.

Which are the prominent cigars and cigarillos market players across the globe?

What are the key factors hampering growth of the cigars and cigarillos market?

High cost of cigars and cigarillos compared to other tobacco products is one of the major factors that is expected to hamper growth of the market over the forecast period.

What are the key factors driving growth of the cigars and cigarillos market?

The rising number of cigar and cigarillo smokers around the globe owing to peer pressure and changing life-style is one of the major factors that is expected to propel growth of the market over the forecast period.

What is the Compound Annual Growth Rate (CAGR) of the cigars and cigarillos market for next 8 years?

The global cigars and cigarillos market is estimated to exhibit a CAGR of 3.0%over the forecast period (2019-2027).

Which region held the largest market share in the cigars and cigarillos market?

Among regions, North America held a dominant position in the global cigars and cigarillos market in 2018, accounting for 39.7% share in terms of volume, followed by Europe and Latin America, respectively.