Dengue vaccine is only recommended in those who have previously had dengue fever. It is given as three injections over a year.

Increasing prevalence of dengue is expected to propel growth of the global dengue vaccine market over the forecast period. For instance, according to the Pan American Health Organization, a total of 1,191,815 cases of dengue were reported, of which 546,589 were laboratory-confirmed and 5,599 were classified as severe dengue in the region of the Americas, between epidemiological week 1 and 22 of 2019.

Moreover, R&D of live attenuated vaccines is also expected to aid in growth of the market. For instance, in May 2019, the U.S. FDA approved Dengvaxia for the prevention of dengue disease caused by all dengue virus serotypes. It is a live attenuated tetravalent chimeric vaccine made using recombinant DNA technology. 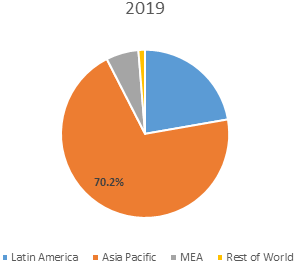 Inability to distinguish dengue fever from other febrile diseases is expected to hinder growth of the market. For instance, the symptoms of mosquito-borne diseases such as Zika, chikungunya virus infection, and dengue fever are very similar, which makes the diagnosis difficult.

Moreover, lack of understanding of the pathophysiology of dengue infection and the lack of specific animal models is expected to hinder growth of the market.

Increasing incidents of dengue in urban areas is expected to offer lucrative growth opportunities for players in the market. For instance, in July 2018, researchers from Center for Information Technology, Bruno Kessler Foundation, Italy, reported that spread of dengue in a non-endemic Brazilian metropolis was similar to a large dengue epidemic in Cairns, Australia, where 95% of transmission events were localized within the city.

Shifts in the age patterns of dengue is also expected to boost growth of the market. For instance, in February 2018, researchers at Taipei Medical University reported that dengue infection rate increases with age and the female population exhibited a higher infection rate if they were older than 40 years.

Major players in the market are launching their products in emerging markets, instead of opting for developed markets. For instance, Sanofi first introduced Dengvaxia in Philippines.

Key players in the market are focused on expanding their geographical presence to enhance their market share. For instance, in January 2020, Takeda Pharmaceutical Company Limited announced plans to market its dengue vaccine in Latin America using Shire plc.’s network.

Major players in the market are also focused on raising funds to expand their product portfolio. For instance, in January 2020, Emergex Vaccines Holdings Ltd. raised US$ 11 million in a series A to fund phase I development of dengue vaccine.

Dengue fever is a mosquito-borne viral infection causing a severe flu-like illness. Dengue vaccine is only recommended in those who have previously had dengue fever. It is given as three injections over a year. Dengue is most likely to affect individual’s tropical and subtropical countries. Increasing prevalence of dengue is expected to propel growth of the global dengue vaccine market over the forecast period.