Increasing adoption of radiation emitting diagnosis tools such as CT scans and MRI by hospitals, ambulatory care centers, and others is expected to increase the demand for dosimeters among healthcare professionals operating these tools, which in turn is driving the global dosimeters market growth. For instance, according to the data published by the Organization for Economic Co-operation and Development (OECD), in the U.S., the total unit of Magnetic Resonance Imaging (MRI) in hospital and ambulatory care centers in 2015, were around 39.0 per 1,000,000 inhabitants, which increased from 31.5 per 1,000,000 population in 2010. Furthermore, recent past has witnessed high adoption of nuclear medicines and radiotherapy for diagnosis of different types of disease such as cancer and some neurological disorders. Hence, increasing prevalence of cancer is expected to increase demand for radiotherapy and nuclear medicines, which in turn is expected to increase demand for dosimeters for healthcare professional working with these radiation emitting substances. According to the American Cancer Society, 2017, cancer is the second most common cause of death in the U.S., which accounts for nearly 1 out of every 4 deaths.

Key players are engaged in launching novel dosimeters in the market, which is expected to drive the global dosimeters market growth. For instance, in April 2018, Tracerco, part of the FTSE100 company, Johnson Matthey Plc. launched two Personal Electronic Dosimeters (PEDs) – the PED-ER and PED-ER+. In 2013, Polimaster Ltd., launched a new Radiation Detector POLISMART II PM1904. This new dosimeter work as a non-wearable gadget, which is connected to iPhone via dock-port and radiation is measured with the help of application in phone. 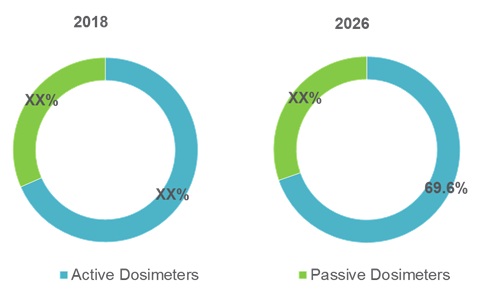 Key players in the market are engaged in strategic mergers and collaborations for the development of novel dosimeters. For instance, in 2012, Royal Philips Electronics collaborated with Unfors RaySafe, Inc. for the development of next-generation Philips DoseAware system, which is used to measure an individual’s exposure to radiation in real-time. In 2017, PTW Freiburg GmbH and Elekta Pty Ltd (Elekta South Africa) entered into a strategic partnership to promote dosimetry education in South Africa. According to the partnership, PTW Freiburg GmbH trained Elekta’s customers and provided basic and advanced dosimetry education through its learning platform, the PTW Dosimetry School.

Accreditations, approvals, and licenses for dosimetry process are regulated by Health and Safety Executive (HSE) in the UK, by National Voluntary Laboratory, Accreditation Program (NVLAP) in the U.S. and by various other agencies in different economies. According to National Voluntary Laboratory Accreditation Program (NVLAP), NVLAP does not accredit or certify any dosimeter. NVLAP accredits the dosimetry processor, not the dosimeter. NVLAP stated that dosimetry quite often use the term, ‘accredited dosimeter’. NVLAP accredits the laboratories, which meet the requirements of ISO/IEC 17025 with an appropriate quality management system and the technical capabilities for processing dosimeters to determine the dose of record.

Dosimeters are the devices used to measure the radiation of an individual who is working under a radiation exposure. There are different type of dosimeters, such as film badge dosimeter and personal electronic dosimeter, which are worn at different levels of body such as collar level, chest level, waist level, finger level, and wrist level. These dosimeters are widely used in healthcare facilities and industries to keep the record of radiation exposure of every individual.

Increasing adoption of radiation emitting diagnostic tools such as CT scans MRI scans is expected to increase the demand for dosimeters among professional handling these tools. Hence, increasing installments of these devices is expected to fuel global dosimeters market growth. For instance, according to Organization for Economic Co-operation and Development (OECD), total unit of MRI in Chile was 4.1 per 1,000,000 population in 2011, which increased to 12.3 per 1,000,000 in 2015. Increasing launches of novel dosimeters in the market is also expected to drive dosimeters market growth in near future. For instance, in 2012, Unfors RaySafe, Inc. subsidiary of Fluke Biomedical LLC launched its new RaySafe i2 active dosimeter at European Congress of Radiology in Vienna 2012. Furthermore, increasing adoption of radiotherapy and nuclear medicines in treatment of cancer is expected to increase the demand for dosimeters for individuals delivering these therapies and individuals involved in manufacturing nuclear medicines. Hence, high prevalence of cancer is expected to increase demand for dosimeters and drive market growth. For instance, according to a study published by the World Health Organization in 2012, annually around 1 million people are diagnosed with cancer in Latin America and Caribbean region

What are the growth estimates for dosimeters market till 2026?

Which are the prominent dosimeters market players across the globe?

What are the key factors hampering growth of the dosimeters market?

High cost of active electronic dosimeters is one of the major factors that is expected to hamper growth of the market over the forecast period.

What are the key factors driving growth of the dosimeters market?

Increasing adoption of radiation emitting diagnosis tools such as CT scans and MRI by hospitals, ambulatory care centers, and others is one of the major factors that is expected to propel growth of the market over the forecast period.

What is the Compound Annual Growth Rate (CAGR) of the dosimeters market for next 8 years?

The global dosimeters market is estimated to exhibit a CAGR of 4.2% over the forecast period.

Which region is dominating the dosimeters market growth?

Among regions, North America held the dominant position in the global dosimeters market in 2017 and is expected to retain its dominance over the forecast period.