Press Release: Drilling Chemicals Market Is Expected To Reach US$ 17,266.8 Million by 2027

Among applications, onshore drilling segment holds dominant position in the market. Severe environmental conditions such as desert topography, extreme high and low temperatures, and dry environment necessitate deployment of various types of drilling chemicals either as a cooling agent or as a lubricant for the oil field drilling processes.

Increasing usage of drilling chemicals is majorly attributed to major investments in energy & mineral exploration. Increasing demand for base metals, precious metals, oil, and natural gas is also resulting in rapid growth of the global drilling chemicals market. This is primarily due to growing urbanization and industrialization in emerging economies. For instance, the residential construction sector was valued at US$ 515.9 billion in 2017, and witnessed a 10.6 % increase over 2016 in the U.S., according to the data provided by the U.S. Census Bureau.

Among base fluid type, synthetic based drilling fluids holds significant market share in the drilling chemicals market. Synthetic base fluids are used to provide cost-effective and safe technologies for drilling oil and gas wells. Their use decreases drilling time and provides environmental safety than other oil base fluids.

North America accounted for the largest market share in the global drilling chemicals market in 2018, owing to increasing oil and natural gas production in the region along with potential developments in oilfield in countries such as U.S. and Canada. According to the U.S. Energy Information Administration, crude oil production in U.S. was 8,831 thousand barrels per day in 2016, which increased to 10,962 thousand barrels per day in 2018. Therefore, significant increase in production of crude oil is expected to boost the drilling chemicals market growth in the region during the forecast period.

Middle East is expected to witness the fastest growth in the global drilling chemicals market over the forecast period. Internal olefins are extensively used in drilling fluids or drilling muds, owing to its properties such as well-bore stability, lubricity, and stability at high temperatures. Rising crude oil and shale gas exploration activities have paved paths for oil & gas drilling operations, which in turn has boosted growth of the global drilling chemicals market. For instance, according to the U.S. Energy Information Administration (EIA), in the U.S., around 330 units of crude oil rotary rigs were in operation in June 2016, which increased to 861 units in July 2018. 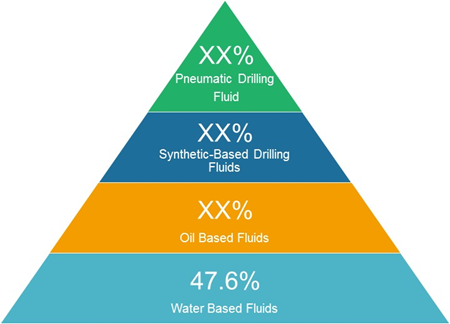 Furthermore, key players in the market are focused on adopting strategies such as technological development and collaborations in order to strengthen their footprint in the global drilling chemicals market. For instance, in 2016, Baker Hughes introduced the next generation of fluids separation technologies, TRETOLITE SNAP water clarifiers and demulsifiers to improve fluid separation performance in challenging production environments to improve overall profitability.

According to International Trade Administration, in 2016, United Arab Emirates (UAE) produced 3.7 million barrels per day (b/d) of petroleum and other liquids, of which 2.9 million b/d was crude oil and remainder was non-crude liquids. The state-owned Abu Dhabi National Oil Company (ADNOC) and its operating companies are in the process of expanding the output of crude oil to 3.5 million barrels per day by 2020, which the country aims to maintain until 2027. Therefore, increasing production of crude oil is expected to boost drilling chemicals market growth during the forecast period.

Electronic cables and cables used for shifting or lifting the loads such as those used for trolley systems and conveyo...

Resin is a hydrocarbon-rich solid or fluid with high viscosity, which is derived from the sap discharge by t...