Press Release: Drinkable Peanut Powder Market to reach around US$ 941.4 Million by 2027

Drinkable Peanut Powder Market to reach around US$ 941.4 Million by 2027

Growing demand for flavored beverages around the globe is projected to propel the market growth of drinkable peanut powder. For instance, in September 2019, PB2 Foods adds peanut powder to functional foods. PB2 with Pre + Probiotics contains 6 grams of plant-based protein per 13 grams serving, which amounts to about 2 tablespoons. It also has just 60 calories and 1.5 grams of fat per serving, or roughly 90% less fat and nearly 70% fewer calories than traditional peanut butter.

Rising demand for plant-based protein is fueling demand for drinkable peanut powder. Owing to, manufacturers are producing peanut powder based beverages that are rich in plant-based protein and low-fat content. For these various food and beverages, producers are focusing on incorporating peanut flour into powders, protein shakes, and smoothies. For instance, in January 2016, Santa Cruz Organic, one major organic peanut butter makers, launched Santa Cruz Organic peanut powder, to be used in smoothies and other peanut butter recipes.

On basis of the region, North America region dominated the global drinkable peanut powder market in 2018, accounting for 38% share in terms of volume, followed by Europe and Asia Pacific, respectively.

Side-effects associated with the consumption of peanuts is expected to hinder the market growth of drinkable peanut powder over the forecast period. Recent studies have revealed that food products such as corn and peanuts contain a carcinogen called Aflatoxin, which leads to liver cancer and other diseases that have a bad impact on the heart and kidneys. This factor is projected to restrict the market growth of global drinkable peanut powder

Lack of awareness regarding the benefits of peanuts across underdeveloped countries is another major factor that can hamper the market growth of drinkable peanut powder in the near future. Owing to lack of disposable income and proper knowledge people are facing food safety and insecurity issues. This factor is projected to curb the market growth of global drinkable peanut powder over the forecast timeframe.

Growing demand for peanut-based supplement product among consumer will offer numerous growth opportunity to the market of global drinkable peanut powder market. For instance, in March 2016, to benefit older adults who are at a high risk of protein-energy malnutrition, scientists from the University of Georgia developed a peanut-based beverage supplement. This product is assured to improve the health status of older people.

Expanding distribution channels such as supermarkets and hypermarkets around the globe especially in the U.S. region is expected to add immense growth to the market of drinkable peanut powder. According to the Dotdash, the world's largest supermarket chain is U.S.-based Kroger Co., with US$ 119.0 billion in retail revenue in fiscal year 2017. Therefore, a growing distribution channel is projected to foster market growth.

Increasing consumption and imports of peanuts products in Europe is estimated to impact the market growth positively over the forecast period. According to the Centre for the Promotion of Imports, Europe is a large market for groundnuts, with an estimated average consumption of 650 thousand tons per year. Imports show a growing market, with an average annual increase of 2% in volume and 3.9% in value from 2013 to 2017. The Netherlands accounted for 40% of total European imports in 2017 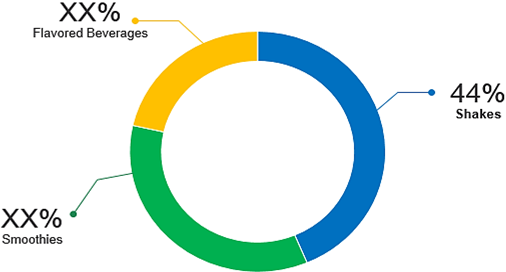 On the basis of application, in 2018, drinkable peanut powder shakes accounted the largest market share of 44% in terms of value, followed by smoothies and flavoured beverages respectively.

Furthermore, North America dominated the global drinkable peanut powder market in 2018, owing to the increasing demand for protein enriched beverages, nutritious products and plant-based protein beverages among the health conscious consumer from this region. As a result, this scenario is estimated to foster the growth of global drinkable peanut powder market in forecast timeframe.

Cherry is a fruit that grows on a tree or a bush. It belongs to the genus Prunus family. A cherry seed consists of ole...