Electrochromic Glass Market, by Application (Windows, Mirrors, Displays, and Others), by End Use (Commercial, Residential, Transportation, and Others), and by Region - Global Trends, and Forecast till 2025

Global Electrochromic Glass Market to Surpass US$ 3.90 Billion by 2025

Electrochromic glass, also known as electronically switchable glass, has various applications such as partitions, windows, skylights, mirrors, and displays. It enables user to control the light and heat passing through such glass, aiding in regulating temperature through remote operated switch. It works on the principle of electrochromism, which requires utilization of materials that can change color or opacity on applying the potential difference across the surface. Moreover, these materials do not require electricity to maintain particular shade after the change has been achieved. Owing to these relative advantages over conventional glass, the global electrochromic glass market is expected to witness growth over the forecast period.

Energy can be conserved by using windows, sun roofs, and displays made from this glass and this is expected to be among the prominent factors propelling growth of electrochromic glass market. In high opacity state, these materials are characterized to reflect around 98% of the incident light, reducing the requirement of high cost air conditioning systems. According to U.S. Department of Energy's National Renewable Energy Laboratory (NREL), windows made from this glass material can save around 8% of the total energy consumption of the buildings, as these utilize low amounts of electricity to change from transparent to dark. Furthermore, benefits such as offering privacy at the flick of switch (increasing opacity of the glass), protection of furniture and pictures from fading due to excessive light are anticipated to propel growth of the global electrochromic glass market over the forecast period. 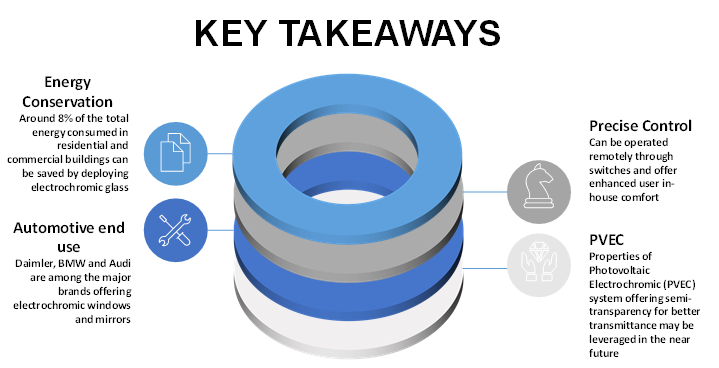 Transportation end-use segment held the dominant position in 2016, and is expected to retain its dominance over the forecast period

In August 2011, Boeing 787-9 Dreamliner was the first airplane to use electrochromic windows for commuters’ convenience. Moreover, owing to its energy saving properties, automotive brands including Audi, Daimler, and BMW have deployed smart glass in some of their top-end models for rear view mirrors, sun-roofs, and other applications. Increasing demand for large surface area sun-roofs to enhance the interior space of vehicles, and drawbacks of mechanical blinds for large surface areas, are expected to be factors for growth of the market. Commercial and residential segments are expected gain significant traction over the forecast period. This is owing to increasing adoption of electrochromic glass for saving energy and for controlling in-house ambient temperature and light conditions.

Consumers in the developed nations such as the U.S., Canada, and European countries including, Germany, the U.K., France, and Italy are increasingly focused on energy conservation that are lost owing to heat and bad natural lighting transmitted through the conventional windows. Smart glass has gained significant popularity and adoption owing to presence of some of the key automotive players adopting these materials in Europe for better consumer comfortability.

Emerging economies are anticipated to witness high growth owing to huge untapped potential in Asia Pacific countries owing to huge population base and growing investments in the architectural development in the region. However, high initial cost for manufacturing this glass and volume centered production costs are expected to be among the major factors hampering the electrochromic glass market growth.

Electrochromic glass are electronically switchable glass that can transform from transparent to opaque depending on the potential difference applied across the terminal of the attached to the surface ends of the material. These are increasingly being used in commercial and residential buildings as windows, for automotive mirrors & windows, airplane windows, and space separators. Ability to control transparency or opaqueness to enable user privacy or to control lighting conditions, remotely is expected to be the major factor for growth of the electrochromic glass market over the forecast period.

According to U.S. Department of Energy, 25 to 35% of the total energy is wasted in buildings, owing to inefficient heat blocking. Moreover, in 2014, California Energy Commission estimated that around 40% of the buildings cooling requirements are owing to the heat gained due solar emissions through windows. Requirement to reduce these overall energy loss in domestic and commercial enterprises is a factor for increasing demand for electrochromic glass. Moreover, need to for enhancing comfort of commuters in airplane and automobiles to remotely control light and heat is another factor for growth of the market. However, limitation of this material to provide efficient switching operations in surfaces other than planar are expected to hamper the overall industry growth through the forecast period.

An in-vehicle emergency calling system is used in the car's communication system to communicate with service providers...

Radio test set is an electronic device, which is designed for maintenance, repair, and upgrading radio system operatin...

Indoor positioning and indoor navigation (IPIN) is a system that consists of network of devices, which helps in locati...

Smart hospitality management is a digital IT-enabled system that is used for optimizing customer experience and hotel ...