The global windows films market size was valued at USD 2.64 billion in 2021 and is anticipated to witness a compound annual growth rate (CAGR) of 5.71% from 2022 to 2030. The window films market is likely to witness significant growth during the forecast period. The growing awareness about the benefits of window films is one of the major factors boosting the market growth. The increasing demand for energy efficiency is another factor driving the market growth. Moreover, the increasing construction activities will fuel industry expansion. Furthermore, rising automotive production and energy-efficient infrastructure is further projected to augment the global window films market growth. These films can help buildings reduce energy costs by blocking excessive sunlight.

North America is projected to witness fastest growth over the forecast period owing to the growing concern over skin cancer in the region. According to a study by the U.S. Surgeon General, nearly 5 million people in the United States receive treatment for cancer each year. In many cases, exposure to UV rays is a major contributor to skin cancer. High-quality window films can block nearly 90% of UV radiation. Moreover, growing concern over energy efficiency has further driven the development of window films market. 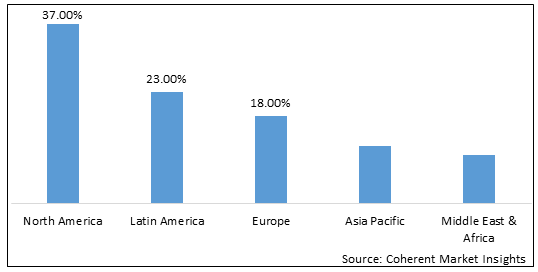 Growing demand for security window films is primarily driving growth of the windows films market. These glass are widely used in automotive, building and construction, and transportation industry. Moreover, these glass helps to protect against vandalism, break-ins, terrorist bomb attacks, natural disasters, accidents, reduce heat to a building, and reduce the harmful effects of ultraviolet rays, among others.

Increasing focus on reducing carbon footprint is again anticipated to foster market growth. According to the Global Carbon Project (GCP), the global carbon-dioxide emissions reached 36.81 giga ton by 2019. Countries, such as China, the United States, and India, dominated the world CO2 emissions, with shares of 28%, 14.5%, and 7.3%, respectively, in 2019.

Growing initiatives by government to raise the awareness regarding sun protection in order to prevent skin cancer is expected to bring lucrative growth opportunities. For instance, the INTERSUN program has been initiated by World Health Organization (WHO) and partners, encouraging and evaluating research on the health effects of UV radiation, developing guidelines and recommendations focused on protecting and educating on the damaging effects of overexposure to the sun, harmful health effects of artificial sunbeds, using the UV index tool to raise awareness about the health risks of UV exposure and protective measures, shielding outdoor workers who are exposed to UV radiation. UV window films cut out about 99% of UV rays helping to slow the effects of fading and the associated damages that can be caused.

Rise in marine industry is expected to serve significant growth opportunities in the near future. For instance, in Australia, the marine industry is projected to increase significantly, due to the growing investments, exports, and shipbuilding activities. In 2019, the Australian government announced an investment of AUD 329 million to transform the marine sector. It launched the largest ever Cooperative Research Center (CRC) to enhance marine-based industrial activities.

Rapid urbanization and industrialization is expected to act as significant trend for the global window films market. According to The World Bank, some 56% of the world’s population – 4.4 billion inhabitants – live in cities. This trend is expected to continue, with the urban population more than doubling its current size by 2050, at which point nearly 7 of 10 people will live in cities.

Decorative films are trending in the global market due to growth in construction sector. Nowadays, offices, entry ways, large rooms, and lobbies are using interior walls in place of glass that can redirect natural light from windows, minimizing the dependency on artificial lights and saving energy costs.

Technical, warranty, and installation issues associated with the use of window films is projected to hinder the market growth.

Growing smart glass market is another key factor expected to restrict the market growth over the forecast period. 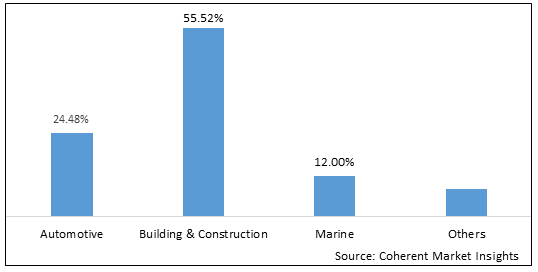 Based on type, the market is segmented into UV Blocking Films, Decorative Films, Safety and Security Films, Privacy Films, Insulating Films, and Other Types. Out of which, UV Blocking Films is expected to dominate the global market over the forecast period and this is attributed to the fact that these films are effective in preservation of energy, while allowing the natural light.

Safety and Security Films segment is also expected to witness significant growth in the near future owing to the growing demand from high security zones such as embassies, hotels, airports, and banks.

Based on end-user industry, the market is segmented into Automotive, Building and Construction, Marine, and Other End-user Industries. Out of which, Automotive is expected to dominate the global market over the forecast period and this is attributed to the fact that these films can reduce the glare of sun, protect passengers from UV radiations, and preventing entering of heat in vehicles.

Building and Construction segment is also expected to witness significant growth in the near future and this is owing to the growing application in solar control. They have ability to reflect the heat entering from the solar radiation and preserve a comfortable ambience, in terms of temperature inside the building.

In May 2019, The Avery Dennison expanded automotive aftermarket portfolio, which also includes a comprehensive range of automotive window films.

In July 2020, Avery Dennison Graphics Solutions Europe has partnered with Lampe Textiles, which will allow it to become the sole distributor of Squid self-adhesive textile window films to the Graphics Industry in Europe, Middle East, and North Africa (EMENA).

*Definition: Window Films can reduce the amount of glare that comes from the sun, and they can improve the visual quality of the entire room. This makes them a popular option in office buildings and homes. They can also be used to improve the aesthetic appeal of buildings that have outdated windows. These films are inexpensive, and can make a big impact on the overall appearance of home.

Window films are thin, laminate films that can be installed inside or outside of glass surfaces. They are used in many types of buildings and automobiles. They can also be used for boating and homes. Window films can help protect home from excessive heat and cold, which are both expensive. These films will also reduce the effects of UV rays, making home more comfortable and energy-efficient.

The window films market is expected to grow at a steady pace over the forecast period. The growth of the automobile industry, increasing consumer awareness of the benefits of window films, and rising per capita income are the major drivers of the market growth. Increasing awareness regarding the benefits of window films has led to an increase in sales worldwide. Moreover, growing energy efficiency is another factor that is expected to drive the market growth. Furthermore, increasing population and middle-class disposable income are further expected to fuel the growth of the window films market.

On the other hand, the outbreak of COVID-19 epidemic has affected the construction industry which has hampered construction investments globally, thus hindering the market's expansion.

The Building & Construction segment is the leading component segment in the market.