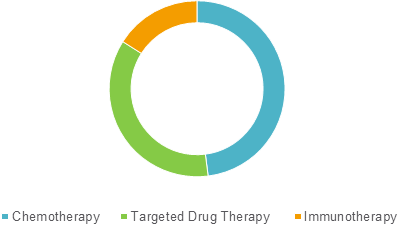 Furthermore, the major risk factors that leads to esophageal cancer include age, gender, tobacco, alcohol, Barrett's esophagus, obesity, and achalasia. These factors are expected to increase demand for esophageal cancer drugs over the forecast period. For instance, according to a study published in National Center for Biotechnology Information in 2017, achalasia patients have 50 times higher risk of incidence of esophageal squamous cell carcinoma than the general population. The overall prevalence of achalasia is 9 to 10 in 100,000 people annually, worldwide.

However, high cost of therapy for the treatment of esophageal cancer is expected to restraint the market growth. For instance, as per the report published in Healthday, in 2013, cancer patients paid US$ 207,000 per year for the treatment and medications while in 1995, the cost was US$ 54,100 per year.

Moreover, the side effects caused by esophageal cancer drugs are loss of appetite and weight loss, fatigue, diarrhea, hair loss, sore mouth, hand-foot syndrome, low blood cell counts, blood clots (deep vein thrombosis), nervous system damage, and heart damage. According to the 2017 report of the American Cancer Society (ACS), side effects of esophageal cancer drugs such as Cisplatin, oxaliplatin, docetaxel, and paclitaxel can cause major damage to nerves outside the brain and spinal cord.

Asia Pacific is expected to witness rapid growth in the esophageal cancer drugs market during the forecast period, owing to rise in clinical trials conducted in Asian countries for novel drugs to treat esophageal cancer. For instance, National Cancer Center Hospital, Tokyo started a clinical trial in December 2018, which evaluated the comparative study between combination therapy with induction DCF (docetaxel plus cisplatin and 5-fluorouracil) versus definitive chemo-radiotherapy for locally advanced carcinoma of the thoracic esophagus.

Esophageal cancer occurs in the cells that line the inside of the esophagus. Major symptoms include difficulty in swallowing (dysphagia), unintentional weight loss, chest pain, worsening indigestion or heartburn, coughing or hoarseness. Drugs approved by the Food and Drug Administration (FDA) such as Docetaxel, Trifluridine, and Tipiracil Hydrochloride are extensively used chemotherapy for treatment of esophageal cancer. Immunotherapy drug named Pembrolizumab is also used for the treatment of esophageal cancer. In 2017, FDA granted accelerated approval to pembrolizumab (Keytruda) for patients suffering from recurrent locally advanced or metastatic, gastric or gastroesophageal junction adenocarcinoma.