A flat panel display (FPD) is an electronic view device that allows people to see content such as text or moving images in different consumer electronics, mobile devices, and a range of entertainment. FPDs are thinner and lighter than conventional cathode ray tubes (CRT), which is usually less than 10 centimeters. There are two different categories of FPDs namely emissive displays and non-emissive displays. LED is an example of an emissive display, while LCD is an example of non-emissive display. These displays are majorly used in TV monitors, laptop computers, portable electronics, digital cameras, packet video games, etc. FPDs offer high pixel resolution, enhanced contrast setting, and lower power consumption.

In January 2020, LG Display unveiled its latest displays and technologies at CES 2020 in Las Vegas from January 7 to 10. The company will introduce a 65-inch Ultra HD (UHD) Bendable OLED display and a 55-inch Full HD (FHD) Transparent OLED display. 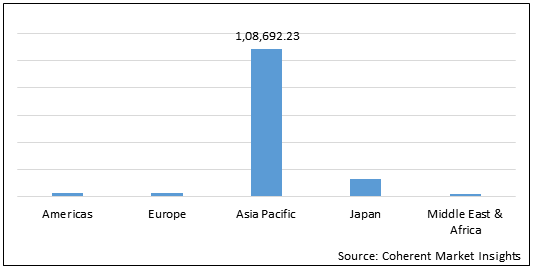 Rising government support to FPD industry is expected to drive growth of the global flat panel display market during the forecast period. Rising government initiatives and proactive support have led to rapid development of flat panel industry in major economies including Japan, Canada, and the U.S. For instance, the government of Japan has shown keen interest in the development of high-resolution screens. On the contrary, the U.S. Government is supporting FPD industry, which is primarily channeled through the Department of Defense. Moreover, the Korean government provides support for development of the high tech industry.

Growing adoption of FPD in mobile devices is expected to propel the global flat panel display market growth over the forecast period. Increasing demand for smartphones with augmented features is a major driving factor in the market. Smartphone manufacturers are focused on adopting FPD technology, in order to cater to increasing demand for high-quality image and clarity. FPD offers enhanced picture quality with improved contrast setting and low power consumption.

LCD manufacturers are innovating their LCD product line and introducing new technology to sustain in the LCD panel market. For instance, in 2012, Samsung commercialized production of a transparent LCD panel for a wide variety of display applications such as platform doors of subways, commercial freezer doors, e-Boards, medical equipment, and mobile devices.

Development in glass OLED panels has led to next-generation displays such as plastic OLED panels. These OLED panels utilize plastic substrate instead of a conventional glass substrate that has various applications. For instance, in 2013, LG Display introduced the world’s first display manufacturer to provide mass-produced flexible OLED panels for smartphones. It is expected to expand further into diverse applications including automobile displays, tablets, etc.

With advent of smart wearable devices, especially smartwatches, the adoption of FPD has increased significantly. For instance, in 2015, AUO introduced 1.6” and 1.4" full-circle AMOLEDs for wearable devices such as smartwatches, which feature low power consumption and are ultra-slim and lightweight. 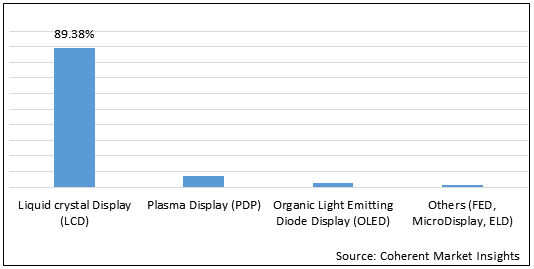 Saturation in the market is expected to restrain growth of the global flat panel display market during the forecast period. Popularity of LCDs is high due to engagement of some of the top players such as Samsung, LG, Panasonic, etc. However, the trend is rapidly changing, owing to the introduction of more powerful technologies such as OLED, which is gaining popularity among major players in the market. Key companies in the market such as Apple are shifting towards OLED displays for application in its products such as iPad, iPhone, iTV, iWatch, etc.

Restricted view angle of LCD is expected to hinder the global flat panel display market growth over the forecast period. LCD technologies have a major drawback, restricted viewing angle. As a result of this, images and brightness on a television screen do not appear in true color when viewed from every angle. Several technologies have been developed to address this issue; however, OLED televisions seem to be the best option in this regard.

The manufacturing process for LED display differs according to the application of end product. Constant research and development activities in LCD technology have resulted in the development of manufacturing processes that are both economical and allow production of quality products. For instance, LCDs manufactured using quantum dot technology incur less in terms of production costs and enable production of energy-efficient displays. Thus, these factors are expected to support growth of the market in the near future.

Although OLED displays offer superior performance, they are comparatively more experience than LCD displays. This is due to material wastage incurred during the manufacturing process, which in turn, increases end product cost significantly. Thus, these factors expected to hamper the global flat panel display market growth over the forecast period.

What is projected CAGR, market size, and forecast period for the market?

What are major companies operating in the market?

What are key factors driving growth of the market?

Growing adoption of plastic OLED is one of the significant emerging trends in the market.

What are challenging factors in the market?

Restricted view angle of LCD is expected to hinder the market growth over the forecast period.

What are key opportunities in the market?