The global food sweetener market size was valued at USD 85,347.89 million in 2021 and is anticipated to witness a compound annual growth rate (CAGR) of 2.47% from 2022 to 2030. The market for food sweeteners is growing as more people are becoming health conscious and concerned about calories. Rising populations and income levels in emerging countries are also driving the market growth. Moreover, huge demand for food and beverages in developing countries has opened new markets for food sweeteners throughout the value chain. The beverage segment is the largest market, accounting for the majority of the overall market share.  The rising health consciousness among consumers has led beverage brands to formulate their products with fewer calories and sugar. In addition, sweeteners can help mask unpleasant flavor profiles and add bulk to foods and beverages.

At the same time, Europe is also projected to witness fastest growth in the global market over the forecast period and this is attributed to the presence of developed countries such as UK, Germany, and France. Germany is the largest market for sweetener. The German food sweetener market was valued at USD 2,965.74 million in 2020, and it is projected to reach USD 3,311.07 million by 2026, registering a CAGR of 1.90% during the forecast period (2021-2026). Moreover, key players are expanding and investing in the manufacturing of sweeteners in order to meet the growing demand for sweeteners in the country. For instance, in July 2019, Cargill invested USD 200 million for transforming its production site in Krefeld, Germany, from a corn sweetener processing plant to a wheat sweetener processing plant. Thus, such innovations in terms of natural sweeteners are boosting the overall sweetener market in the country 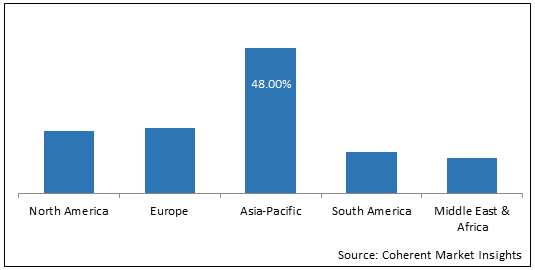 Increasing production capacity of sweeteners across developed countries in order to meet the growing demand is again augmenting market growth. For instance, in January 2018, Cargill and ARASCO, through a joint venture in Saudi Arabia, opened a new corn milling facility, MEFSCO, that tripled its total production volume and expanded its product portfolio to include high fructose corn syrup to meet the growing demand across the confectionery, juice, bakery, and catering segments to serve the Gulf Cooperation Countries (GCC), which include a group of six countries like Saudi Arabia, the United Arab Emirates, Kuwait, Oman, Bahrain, and Qatar.

Around 50% of the consumers are cutting down sugar intake in order to reduce weight, and 56% of the consumers are cutting down the intake for future health concerns. However, the right blend of sweeteners can replace 50% or more of sugar without a noticeable change in taste. For instance, in February 2021, Batory Food launched Batory Sweet Essentials, a lineup of five high-intensity sweetener blends as sucrose replacers. They may be used in applications, such as baked foods, dairy, frozen foods, snacks, and beverages. The blends meet Generally Recognized As Safe (GRAS) regulations from the US Food and Drug Administration.

Increasing taxes on sugar in order to incentivize consumers to eat less sugar is creating demand for natural alternatives. This hold significant growth opportunities for the key players. This is boosting demand for stevia from food and beverages producers.

Government authorities are increasing taxes on sugar in order to reduce the sugar consumption among consumers, due to the growing obesity epidemic across the world becoming a serious public health problem. Consumption of sugar increase the risk of chronic diseases, such as Type 2 diabetes, cardiovascular diseases, and certain cancers.

Misconception regarding the consumption of sweeteners and their negative effects on human health among consumers is expected to restrict the market growth.  For instance, The United States Food and Drug Administration (FDA) only considers high-purity steviol glycosides to be safe for human consumption currently. Because the FDA has not approved crude stevia extracts and stevia leaves as food additives, companies are not allowed to market them as sweetening products. According to the FDA, the acceptable daily intake for stevia glycosides is 4 milligrams (mg) per kilogram of body weight. 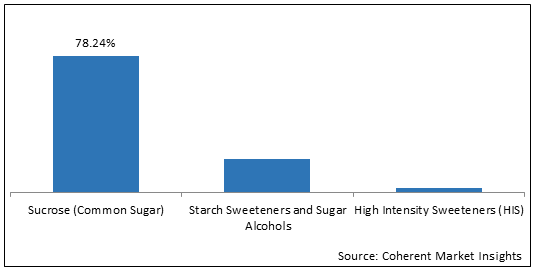 The global food sweetener market report is segmented into type, application, and geography

Based on type, the market is segmented into Sucrose (Common Sugar), Starch Sweeteners and Sugar Alcohols, and High Intensity Sweeteners (HIS). Out of which, Sucrose is expected to dominate the global market over the forecast period and this is attributed to the high demand for liquid form sucrose from food &beverage industry. It is also available in powdered and granulated form. The sucrose (common sugar) segment of the market studied was valued at USD 65,559.65 million in 2020, and it is projected to reach USD 73,830.59 million by 2026, registering a CAGR of 2.03% during the forecast period.

Starch Sweeteners and Sugar Alcohols segment is also expected to witness significant growth in the near future owing to the growing demand for processing and convenience food.

Based on application, the market is segmented into Bakery and Confectionery, Dairy and Desserts, Beverages, Meat and Meat Products, Soups, Sauces, and Dressings, and Other Applications. Out of which, Bakery and Confectionery is expected to dominate the global market over the forecast period as it is one of the largest market for sweeteners. The bakery and confectionery segment of the market studied was valued at USD 22,218.01 million in 2020. It is projected to reach USD 26,881.41 million by 2026, registering a CAGR of 3.27% during the forecast period.

Beverages segment is also expected to witness significant growth in the near future owing to the growing demand for low-calorie beverages among health conscious consumers. The beverages segment of the market studied was valued at USD 26,872.99 million in 2020, and it is projected to reach USD 29,108.67 million by 2026, registering a CAGR of 1.38% during the forecast period.

*Definition: Food Sweeteners are a great way to sweeten food without adding calories or sugar. Sucralose is an artificial sweetener that is about 600 times sweeter than table sugar, and the majority of it is not absorbed by the body. It has been approved for use as a food sweetener in the EU since 2004 as E955.Fructose, also known as levulose, is extracted from sugar cane and is about half as sweet as sucrose. It is used as a food sweetener in beverages and baked goods, and it is low in the glycemic index. However, it is not recommended for use in infant formula.

Food sweeteners are substances that have the capacity to enhance the taste and aroma of foods. They are made from sugar or carbohydrate-derived sweet tasting compounds. Their presence in food affects the colour and texture of food and can influence osmotic pressure and water activity. Among them are sucrose, glucose syrups, and isomaltulose. Several sugars are naturally occurring in food. Those made from sucrose have less than 1 calorie per serving. In contrast, sugar alcohols, which are often found in processed foods, can cause digestive problems in some people. However, artificial sweeteners, such as sucralose, can be found in foods, including fruit juices, cereals, and baked goods.

The global food sweetener market is largely driven by increasing demand for low-calorie consumer goods. In addition, the increasing health consciousness of consumers is driving the growth of the market. This has led to the emergence of natural sweeteners that mimic the taste of conventional sugar. In addition, manufacturers are concentrating on expanding their product portfolios and investing more in R&D.

On contrary, increasing taxes and label regulations on sugar is expected to restrict the market growth.

Growing demand for natural sweeteners and increasing demand for stevia-based antioxidant food and beverage product are fuelling the growth of the market.

The Sucrose (Common Sugar) segment is the leading component segment in the market.

Increasing taxes on sugar and misconception regarding the consumption of sweeteners is the major factors restraining growth of the market.