The global formic acid market size was valued at USD 1.6 Billion in 2021 and is anticipated to witness a compound annual growth rate (CAGR) of 4.9% from 2022 to 2030.  Increasing use of formic acid for producing animal feeds and silage additives is predominantly fueling growth of the market. It is used as a preservatives and antibacterial ingredient in livestock feed. According to the International Feed Industry Federation, world compound feed production has reached an estimated 1 billion tons, annually. Global commercial feed manufacturing generates an estimated annual turnover of over USD 400 billion. Moreover, increasing poultry consumption especially in countries such as India and China due to growing population is fostering growth of the market.

Based on geography, the global formic acid market is segmented into North America, Europe, Asia Pacific, Latin America, and Middle East &Africa. Asia Pacific is expected to dominate the global market over the forecast owing to the high feed production. According to the Coherent Market Insights analysis, in 2020, China restored its position as the world’s largest animal feed producing country, recording an output of 252.76 million metric ton. Pig and poultry feed production accounted for about 35.3% and 49.6% of total feed produced in the country, respectively. About 70% of the population in the India is known to be non-vegetarian in the country, wherein chicken holds the highest consumption rate, followed by fish. In order to cater to such demand, poultry meat production is recorded to be approximately 4.06 million metric ton, which is almost 50% of the country’s total meat production.

Europe is expected to gain significant growth over the forecast period owing to the strong presence of economies such as Germany and U.K. According to Altech Agri-Food Outlook 2022, the country produced around 24.51 million metric tons of feed in 2021, as compared to the 24.93 million metric tons in 2020. The country is home to about five of the world’s largest animal feed manufacturers, including AGRAVIS Raiffeisen AG, DTC Deutsche Tiernahrung Cremer GmbH & Co. KG, H.  The UK recorded about 1.3% growth compound feed production in 2020, even after COVID-19 disruptions. 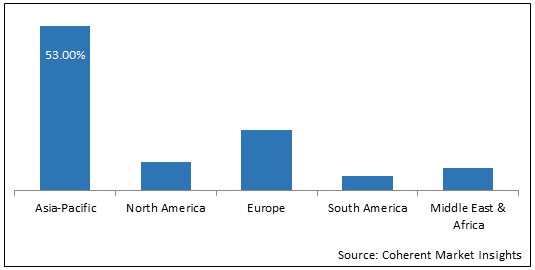 Increasing demand from animal feed and silage is driving growth of the formic acid market. Formic acid is used as an additive in solid and liquid form. It inhibit growth of harmful bacteria in the feed via acidification and also increase digestion of the feed. Moreover, countries of Asia and Europe are mainly shifting from the use of antibiotics and largely engaging themselves in feed acidulants which is also accelerating market growth.

Growing demand for animal protein worldwide is again augmenting growth of the market. The UN Food and Agricultural Organization (FAO) estimates that the world will have to produce 60% more food by 2050, and it is believed that animal protein production will grow even more – meats (poultry/swine/beef) will double, as well as dairy, and fish production will almost triple by 2050 there by increasing the feed consumption which in turn drives the market growth.

Growing demand for formic acid from leather tanning is expected to offer significant growth opportunities over the forecast period. Formic acid is widely for dyeing, tanning, and sterilizing skins and hides in the tanning industry. Moreover, it also helps in providing smooth superior finish such as suede. Growing market of leather industry will favor the market growth. According to the reports of the Leather Export Council of Egypt (LEC), Egypt has exported USD 70.47 million of leather and leather goods from January to October 2021. Additionally, the Japan Leather and Leather Goods Industries Association (JLIA) stated that in August 2021 the leather imports were up by 50%.

Increasing demand from textile industry is projected to bring potential growth opportunities for the market players over the forecast period. According to the Coherent Market Insights analysis, the global textile industry has been projected to grow at a pace of 4.4% CAGR reaching USD 1,230 by 2024. The key countries participating in the growth of this industry are China, the United States, European Union, and India.

Demand for drug prescription is increasing which is creating demand formic acid. It is used as a local stimulation drug, vitamin B1, aminophylline, astringents, Analgin, aminopyrine, raw material for synthesizing insulin, and many more applications in the pharmaceuticals sector. Increasing investment in drug research &development activities will further favor the market growth. For instance, Roche spent USD 11.3 billion in 2020 for research and development, other companies such as Novartis spent USD 8.48 billion, AbbVie spent USD 5.83 billion, Johnson & Johnson spent USD 9.56b billion, and Merck & Co. spent USD 9.23 billion in the same year.

The global formic acid market is experiencing certain obstacles, such as the emergence of other cost-effective substitutes, urea sulfate for formic acid. This is expected to hinder the market growth. Urea sulfate can be used for lowering the pH of leather processing solutions in place of conventional pH lowering acids, such as formic acid.

The use of formic acid at a higher concentration can have negative effect on user. This is expected to restrict the market growth. 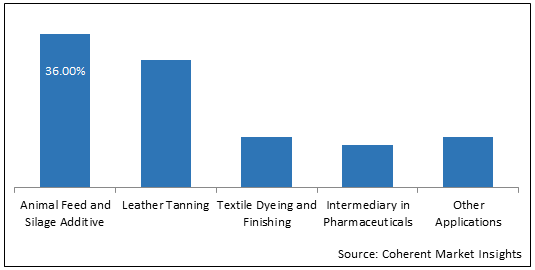 The global formic acid market report is segmented into application and region.

Based on application, the market is segmented into Animal Feed and Silage Additive, Leather Tanning, Textile Dyeing and Finishing, Intermediary in Pharmaceuticals, and Other Applications. Out of which, animal feed and silage additive is expected to dominate the global market over the forecast period and this is attributed to the increasing consumption of meat worldwide. Also, growing incidences of animal diseases and need for adequate metabolism rates in livestock are further creating demand for animal feed globally.

Intermediary in Pharmaceuticals segment is also expected to witness significant growth in the near future and this is owing to the  growing demand for prescription drug due to rise in prevalence of various chronic disease. According to the Coherent Market Insights analysis, the demand for prescription drugs has been increasing with the rising number of diseases across the globe which has increased the revenue of prescribed drugs from USD 598 billion in 2013 to USD 689 billion in 2020. Additionally, the OTC drugs also have gained pace from USD 93.4 billion in 2013 to USD 113.8 billion in 2020.

The global formic acid market is highly competitive. This is attributed to continuous launch of new technologies due to ongoing R &D and efforts by value chain participants. Moreover, key players are adopting various business growth strategies in order to expand their presence on regional as well as global basis. Some of the key players in the global formic acid market are:

In nature, formic acid is found in the stings of a number of insects. Stinging nettles and carabid beetles, both in the order Hymenoptera, produce the chemical, as do some species of stingless formicine ants in the subfamily Formicinae. In the silage industry, formic acid is an excellent additive because of its rapid acidification capacity. It suppresses the growth of coliforms and inhibits the proliferation of undesirable microorganisms. It can also improve the dry matter retention.

Formic acid is produced commercially in various products such as descalers, rust removers, and institutional laundry detergents. It is particularly useful in the textile industry, where it is used as a pH regulator and to neutralize alkaline solutions. Increasing fiber production and increasing living standards in Asia are expected to drive demand for the chemical in textile dyeing. In addition to its numerous industrial applications, formic acid is also used in the dyeing process of textiles.

Increasing use of formic acid for producing animal feeds and silage additives is predominantly fueling growth of the market. Growing demand for animal protein worldwide is again augmenting growth of the market. Moreover, growing demand for formic acid from leather tanning is expected to offer significant growth opportunities over the forecast period. Furthermore, increasing rubber production is expected to shape the market growth positively in the near future.

Growing demand for animal feed and silage additives are fuelling the growth of the market.

The Animal Feed and Silage Additive segment is the leading component segment in the market.

Advent of other cost-effective substitutes, like urea sulfate is the major factors restraining growth of the market.