Functional Films Market to Surpass US$ 37 Billion by 2027

Functional films are polymer sheets that are used to improve the properties of the fragile substrate. They are widely used across solar cells and the automotive industry for enhancing the functional properties of the automotive component. These films can be classified into adhesive films, conductive films, optical films, and water-soluble films. In the healthcare industry, functional play a very important role in the development of various high-quality medical products. These films are protective, heat &chemical resistant, transparent, durable, and flexible in nature. Therefore, these films are gaining huge demand across the various end-user industry due to their excellent chemical and physical properties.

Increasing installation of solar panel especially in the U.S country is projected to propel the market growth of the functional film. According to the Solstice, the U.S. had 64.2 GW of installed solar–enough to power 12.3 million American homes by the end of 2018. Solar energy accounts for 1.6% of total U.S. electricity generation. Therefore, the growing solar cell market is projected to propel the growth of the functional film market.

According to the World packaging, the world packaging market amounted to US$851 billion in 2017, an increase of 2.8% compared to 2016 at constant prices, and it is set to reach US$876 billion in 2018, based on the annual growth of 2.9%. The functional films are widely used in the packaging industry due to their various advantages such as lightweight as compared to other packaging materials, abrasion-resistant, durable, and flexible. Hence, the growing packaging industry is augmenting the market growth.

The rising production of polymers around the globe is projected to offer numerous growth opportunities to the market of functional films. According to the World plastic production, Plastics production ramped up from 1.5 Million Ton in 1950 to approximately 322 Milion tons in 2015. In 2015 global plastic production grew by 3.4% compared to 2014. Hence, such a rise in plastic production will favor market growth over the forecast period.

Increasing production of consumer electronic especially across the Asia Pacific region is expected to fuel the market growth of the functional film. The functional film is widely used in the manufacturing of smartphones and tablets. According to the Economic Times, the appliances and consumer electronics industry is projected to double to US$ 19.9 billion by 2024-25. The industry had a total market size of US$ 10.3 billion in 2018-19, in which US$ 4.3 billion was contributed from domestic manufacturing.

The growing trend of flexible display for making the product lightweight, durable, and reducing energy consumption is a major trend that has been observed in the market. For instance, in July 2018, China's Huawei Technologies, the world's third-largest smartphone maker, has announced to roll out the first foldable handset with a flexible screen ahead of its bigger rival Samsung Electronics, according to analysts and industry sources familiar with the matter.

Increasing sales and demand for the electric vehicle due to growing concerns over environmental pollution is expected to propel the market growth of the functional film. According to the data by electric vehicle sales in April 2019, the global EV sales totaled about 2.1 million for 2018, an increase of 64% compared to the total sold in 2017. 2018 EV sales increased by 79% in the U.S., 78% in China, and 34% in Europe as compared to 2017. 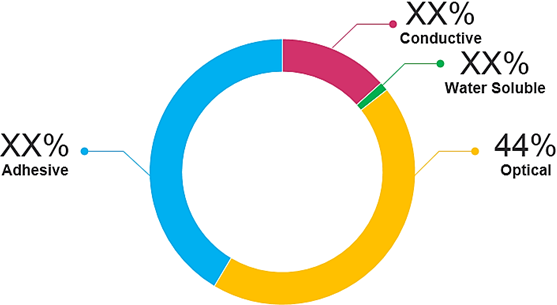 On the basis of product type, in 2018, optical accounted the largest market share of 44% in terms of revenue, followed by adhesive and conductive, respectively.

Functional films are the type of films or sheet which are used for increasing the potential of a product by improving the functionality of the substrate. Along with providing the dimensional benefits, these functional films are also compatible with a wide-range of materials and recent modern technologies. In addition to this, they exhibit other benefits, such as lesser energy is required for their processing as well as functional films can also be fabricated to customized composite structures based on the requirement.

On the basis of product type, the global functional films market is bifurcated in to conductive, optical, adhesive, and water-soluble. Among regions, Asia-pacific is expected to observe substantial growth in term of revenue, during the forecast period, owing to the steady rise in growth of various end-user industries such as electronics, automotive, pharmaceutical, packaging, construction and energy.

What are the growth estimates for functional films market till 2027?

The global functional films market is estimated to surpass US$ 37 Billion by the end of 2027, in terms of revenue.

Which are the prominent functional films market players across the globe?

What are the key factors hampering growth of the functional films market?

Fluctuating prices of raw materials to produce functional films is one of the major factors that is expected to hamper growth of the market over the forecast period.

What are the key factors driving growth of the functional films market?

Increasing installation of solar panel especially in the U.S. is one of the major factors that is expected to propel growth of the market over the forecast period.

What is the Compound Annual Growth Rate (CAGR) of the functional films market for next 8 years?

The global functional films market is estimated to exhibit a CAGR of 4.8% during the forecast period (2019-2027).

Which region held the largest market share in the functional films market?

Among regions, Asia Pacific held a dominant position in the global functional films market in 2018, accounting for 67% market share, in terms of revenue, followed by North America and Europe, respectively.

Edible packaging is a type of packaging that is used for w...