Global GaN Power Devices Market to Surpass US$ 2.20 Billion by 2025

Gallium nitride (GaN) is used in production of semiconductor power devices and Radio-Frequency (RF) components and light emitting diodes (LEDs). GaN powered devices have proved efficient than silicon semiconductors in power conversion, RF, and analog applications. GaN conducts electrons over 1000 times more efficiently than silicon. Moreover, the manufacturing cost of GaN devices is lower than silicon, since GaN devices are produced using standard silicon manufacturing procedures in the same factories that currently produce conventional silicon semiconductors. The devices are much smaller for the same functional performance and can be produced per wafer. GaN is lower on resistance giving lower conductance losses. The devices powered by GaN are faster that yield less switching losses and less capacitance results in less losses when charging and discharging devices. Moreover, GaN devices need less power to drive the circuit and require less space on the printed circuit board. These significant benefits of GaN over other alternatives such as silicon transistors are expected to fuel the overall growth of the GaN power device market. 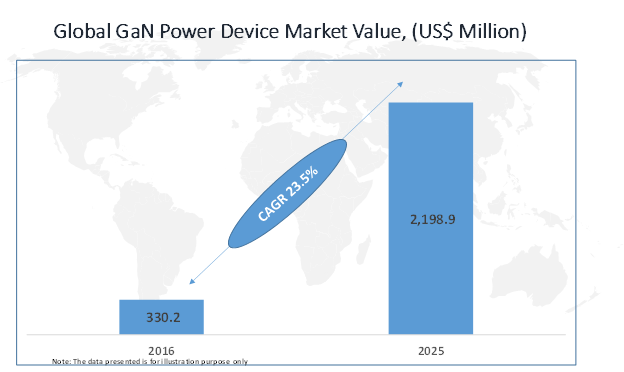 The recent past has witness high proliferation of electric vehicles and increasing adoption of electrical and electronic components in internal combustion engines for enhanced and convenient control among users. According to Coherent Market Insights, vehicle electrification technologies are expected to witness a CAGR of over 8.8% over the forecast period and be valued at over US$ 120 billion by 2025. Increasing adoption of autonomous vehicles is expected to increase the demand for efficient communication systems featuring high frequency bandwidth and robust operations. This in turn, is expected to fuel growth of the market for GaN power devices in the near future.

High cost of systems featuring integration of gallium nitride components due to capital intensive nature of materials and manufacturing procedures is expected to hamper growth of the market. Moreover, GaAs components are widely used in small signal Monolithic Microwave Integrated Circuit (MMIC) and low noise amplifier (LNA). Application of gallium nitride semiconductor is projected to become mainstream component, though it will require considerable time owing to the cost factor and thus, is among the prominent growth challenges.

Asia Pacific accounts for the largest population base and is also the largest market for key end-use industries, in turn, contributing to the largest consumer base of GaN power devices. According to Coherent Market Insights’ analysis, China and India contribute to around 35% of the global population base. Moreover, largest consumer base for automotive, consumer electronics, communication, and industrial manufacturing will provide the strongest growth prospects over the forecast period.

GaN materials include a wide range of features such as wide energy band gap (3.4eV), high heat capacity, thermal conductivity, low device resistance, and ability to operate at transition speeds from on to off and vice versa, are among the prominent benefits, inadvertently driving growth of the GaN power devices market. High conductivity in On state in comparison to alternatives such as silicon substitutes present high opportunity to improve the energy efficiency in power distribution and control systems. However, limited availability and relatively high cost of the material is expected to hinder the overall growth of the market in the near future.

Electromagnetic shielding is typically applied to enclosures to isolate electrical devices from their surroundings spa...

A torque sensor is a device used for measuring and recording the torque of a rotating system such as an engine, cranks...