The gas diffusion layers (GDL) are a fibrous porous media with two primary functions: uniform distribution of reactive gases on the electrode surfaces and electron transfer to or from the external electrical circuit. They are made of thin carbon fibers, a porous and hydrophobic material. The gas diffusion layers are a very important supporting material in a membrane electrode assembly (MEA). Gas diffusion layers are a porous substance made up of a dense array of carbon fibres that also act as an electrically conductive pathway for collecting current. GDLs are often subjected to high compression forces as part of the MEA when assembled, and thus, GDLs need to be rigid and stable enough to withstand these mechanical stresses.

One of the key factors expected to stimulate market growth during the forecast period is the increasing awareness regarding harmful effects of greenhouse gases. Lack of clean energy policies has resulted in an increase in CO2 emissions across the globe. For instance, as per the article published by IEA (International Energy Agency) on March 2, 2021, the global CO2 emission rose by 2% or 60 million tons from December 2019 to December 2020. The gas diffusion layer distributes all of the gases to the membrane on which catalysts are applied which are called as catalyst coated membrane (CCM). This membrane assists in the separation of oxygen and hydrogen, thereby, transmitting positively charged protons from the anode side to the cathode side. As more gas flows homogenously across the entire cross-sectional area, more electricity is produced, which in turn increases the power density of the fuel cell.

Among regions, Asia Pacific held dominant position in the global gas diffusion layer market in 2020, accounting for 42.5% market share in terms of revenue, followed by North America and Europe. The market for gas diffusion layers has grown as a result of significant investments in fuel cell technology, especially in Japan and South Korea. Other countries such as Singapore, India, Indonesia, and Malaysia have started or are about to start exclusive fuel cell marketing programs in their respective local areas. These countries are now focusing on fuel cells for backup power (hospitals, educational institutions, and others). From 2020, India invested in fuel cell systems to supply backup power for telecommunication towers. Moreover, investments by the Chinese government and initiatives by Indian authorities for a cleaner energy source results in growth of the gas diffusion layer market in this region. 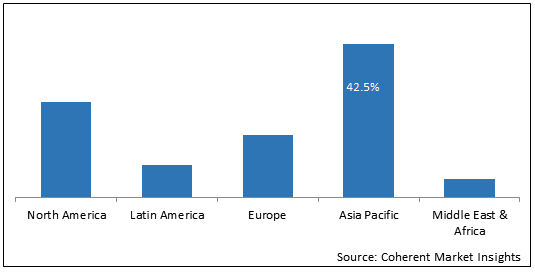 High cost associated with gas diffusion layer has negatively affected the gas diffusion layer market. The major base material in gas diffused layers is polyacrylonitrile (PAN). Since, the cost of PAN is higher (~US$ 15-20 per kg) as compared to other natural fibers such as cotton or bamboo fiber, the demand for gas infused layers is expected to get hampered to some extent. Moreover, the raw material used in the gas diffusion layer such as PAN or carbon cloth or paper should have high graphitization temperatures (~1700°C) for attaining higher conductivity and post-carbonization treatment, which further adds up to additional costs. These factors are projected to hinder the demand for gas infused layers to some extent.

Adoption of several marketing strategies by the key players have seen a major growth in the market. Key players are focusing on strategies such as mergers, acquisitions, and capacity expansions to increase their geographical reach and widen their product portfolio in the global gas diffusion layer market. For instance, in March 2020, Toray Industries, Inc.'s Germany-based subsidiary, Greenerity, constructed its second factory in Bavaria, Germany. This new facility manufactures, develops, and distributes essential parts for hydrogen fuel cells and water electrolyzers. 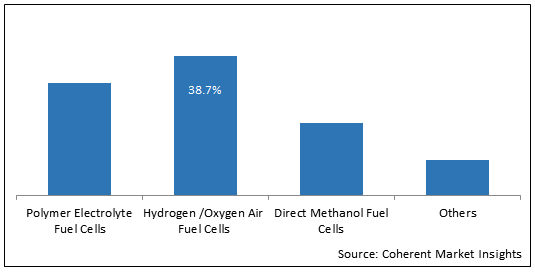 On the basis of application, in 2020, hydrogen/oxygen air fuel cells segment held largest revenue share of 38.7% in global gas diffusion layer market. Being a carrier of energy, hydrogen fuel cells can be applied in a variety of use cases. Typical applications of fuel cell can be categorized into two major types: stationary power transportation and other applications including portable power. Governments across the globe are taking initiatives to promote hydrogen fuel cells for transportation. For instance, California represents the highest level of commercialization of hydrogen fuel cell vehicles in the U.S., due to a level of government support and public support for renewable energies not found in other states.

The COVID-19 impact across industries varies. The outbreak has flipped the growth switch in every sector of the economy, and power generation sector, is no exception. The increasing spread of COVID-19 has also mandated the gas diffusion layer manufacturers to deploy precautionary measures in their facilities including labors and plant controllers screening and monitoring and sanitizing the facilities. This has further increased the plant operational costs, which has indirectly increased the prices of these high value-added carbon paper. However, unlocking and reopening of industries coupled with shifting focus on production and sustainable development is expected to boost the growth of the energy sector over the post-pandemic period.  For instance, as per the article by The International Energy Agency (IEA) on March 2, 2021, the global energy demand gained momentum in December 2020, after showing a dip of around 6% in April 2020.

The gas diffusion layers (GDL) are a fibrous porous media with two primary functions: uniform distribution of reactive gases on the electrode surfaces and electron transfer to and from the external electrical circuit. They are made of thin carbon fibers, a porous and hydrophobic material. The thickness of these fibers is between 250 and 400 μm, and the perforations or pores available are 4 to 50 μm in size. These gas diffusion layers must also serve as a support for the electrolyte, and their structure must allow water to escape, which would prevent the reaction from occurring. Gas diffusion layer (GDL) is a crucial component which is mainly responsible for the gas and water transport in any polymer electrolyte membrane (PEM) fuel cell. GDL is made up of two major layers: macroporous substrate (MPS) and microporous layer (MPL). MPS is subsequent to the gas flow field and it generally works by providing gas diffusion through carbon paper or carbon cloth and collecting the current. MPL is commonly used to reduce the contact resistance between the catalyst layer (CL) and the gas diffusion layer (GDL).

Carbon-based materials are mostly preferred for the construction of the GDL. Carbon is a favorable material that is capable of providing good electrical conductivity, gas permeability, elasticity and durability for PEM fuel cell components. Carbon paper or carbon cloth is used in the content of MPS of the GDL. Dual pore size distribution can be seen for the carbon cloth due to the voids between the carbon fibers.

The gas diffusion layer market is expected to register stable growth over the forecast period, owing to the use and development of porous metals such as iron and copper among others, in various engineering applications such as proton exchange membrane fuel cells that have increased substantially.

The metal substrates offer structural and functional applications in a wide range of industries such as biomedical applications and energy transportation. The metals substrates offer low density, high permeability in open structures, high energy absorption, and large specific surface area, and thereby linked with good electrical and thermal conductivity, and are corrosion resistant.

What will be the gas diffusion layer market size be in 2028?

Increasing awareness regarding harmful effects of greenhouse gases and promotional activities undertaken by statutory governing bodies is projected to propel the overall product demand during the forecast period.

Key players are focusing on strategies such as mergers, acquisitions, and capacity expansions to increase their geographical reach and widen their product portfolio in the market.

High cost associated with gas diffusion layer is anticipated to restrain the market growth in the coming years.