Hydrogen is a chemical compound that is widely used across various industries. Majorly it is used in the production of semiconductors, ammonia, carbon steels, methanol for polymer, and special metals. Moreover, it is also used in the electronic industry as a reducing agent and carrier gas. Furthermore, it is also used in refineries in the processing of intermediate oil products.

Europe region held dominant position in the global hydrogen market in 2020, accounting for 35.21 % share in terms of volume, followed by Middle East and Asia pacific respectively.

Europe has set itself a goal of decarbonising its economy by2050, Hydrogen is likely to  play an important role in achieving net zero carbon emission .The European commission has set its hydrogen strategy which provides for addition of 40 gigawatts of Electrolyser by 2030 to meet its hydrogen demand . 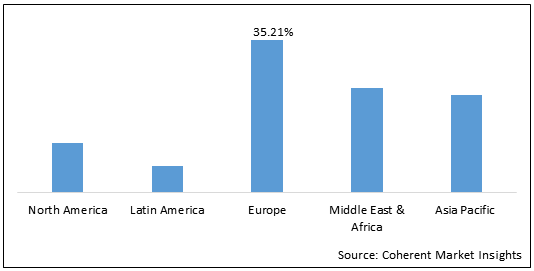 The growing use of hydrogen as a fuel in rockets as hydrogen is a highly flammable fuel is projected to bring profitable opportunities in the hydrogen market. Hydrogen is highly powerful for machines such as spaceships. Moreover, it is also an environmentally friendly and ideal choice of fuel when compared to other fuel sources. Furthermore, hydrogen is three times as powerful as gasoline and other fossil fuels. This factor is also projected to serve major growth opportunities.

Researchers around the globe are focusing on developing an efficient storage system for the storage of hydrogen at low pressure without the need for compression. The volume to weight ratio of hydrogen is high which demand high volume capacity for the storage system. This is expected to provide potential market opportunities over the forecast period. Hence growing focus on the development of such advanced technology is projected to offer significant growth opportunities for the hydrogen market in the near future.

The development of eco-friendly production technologies such as photo biological, photo bioreactors, etc. is a major trend in the market. Moreover, various companies are undertaking initiatives to modify and develop the existing production process of hydrogen in a carbon-free method which is further projected to upsurge the market growth of hydrogen in the near future.

Many companies are focusing on providing on-site hydrogen generation plant on rent. This is expected to be one of the major trends in the market of hydrogen. According to the Coherent Market Insights, Australia-based Gas Generators International is offering rental plans for on-site hydrogen generators, which is used across various end-use sectors, in which, the company builds, installs, and maintains the complete H2 generation plant while charging only the rental amount from its customers. These generators apply natural gas reforming technology for hydrogen generation. 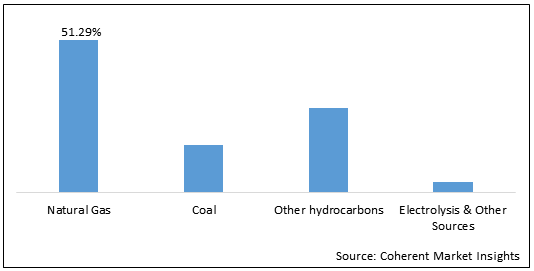 According to International Energy Agency, over 96% of the world Hydrogen is produced using the steam Methane Reforming process (SMR) .In this reaction Natural Gas is reacted with steam at an elevated temperature to produce carbon monoxide and hydrogen.

Hydrogen gas is highly flammable as it is a very powerful source of fuel is estimated to inhibit market growth. Moreover, the production of hydrogen highly depends on the availability of fossil fuels which is again anticipated to restrict the market growth of hydrogen

November 2019: Linde announced that it has signed a memorandum of understanding (MoU) with Baowu Steel Group's new subsidiary, Baowu Clean Energy Ltd, to jointly cooperate on research and development to further develop China's hydrogen market for industrial and mobility applications.

Hydrogen fuel is simply a zero emission fuel burning with oxygen; as such it is produced in a completely zero carbon manner. It can easily be utilized in internal combustion engines or fuel cells. This type of fuel has no pollutants and no carbon emissions associated with it. Hydrogen is also very easy to manage and handle. The main reason for the rising popularity of hydrogen is because it is an abundant source of energy that can easily be harnessed by our vehicles. Even though there are several other fuels that are much more abundant in terms of volume and use, it still cannot be compared to hydrogen in terms of its availability.

Increasing production of hydrogen is expected to propel growth of the global hydrogen market over the forecast period. For instance, in August 2021, Linde signed a long-term agreement with Infineon Technologies for the on-site production and storage of high-purity green hydrogen. The agreement also involves the supply of other industrial gases.

The global hydrogen market is witnessing rise in prices of products. For instance, from October 2021, or as contracts permit, Air Products announced to increase product pricing, monthly service charges, and surcharges for liquid and bulk industrial gas products for merchant customers in North America.

What factors are influencing the adoption of hydrogen?

Increasing desulfurization and growing production of methanol are factors boosting demand for hydrogen.

High cost of hydrogen production and it’s high flammability are factors hindering growth of the market.

The refinery application segment held dominant position in the market in 2020.

Development of eco-friendly production technologies and availability of on-site hydrogen generation plant on rent are gaining traction in the market.