GCC And Levant LED And OLED Lightning Products and Displays Market is Expected to Surpass US$ 2884.4 Mn by 2028

LED lights or lamps are electric lights used in a light fixture that produces light using light-emitting diode LEDs that can come to full brightness immediately with no warm-up today. Organic light-emitting diodes (OLED) that light-emitting panels from organic materials that emit light when electricity is applied. An OLED display works without a backlight since it emits visible light. Hence, it can display deep black levels and can be lighter and thinner liquid crystal display (LCD).

In July 2021, OSRAM has partners with ViewSonic Corp, a leading global provider of visual solutions, for working on the development of exceptional LED projectors. 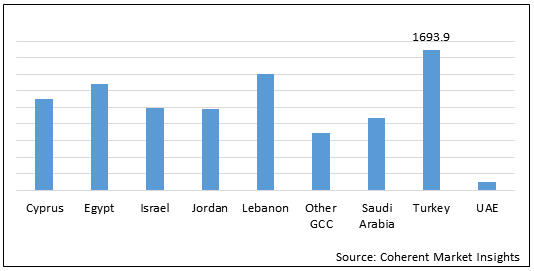 Turkey held dominant position in the GCC and Levant LED & OLED Lighting Products and Displays Market in 2020, accounting for 37.9% share in terms of Value, followed by Israel and UAE, respectively.

Increasing deployment of FPDs in various sectors is expected to drive growth of the GCC and Levant LED & OLED lighting products and displays market during the forecast period. In the Middle East, various sectors such as travel & tourism, retail, and hospitality are increasingly adopting FPDs, which in turn, is expected to witness massive demand for LED and OLED products. In restaurants, customers are encouraged to select food from menus on tablet devices. In hospitals, doctors monitor patients’ health through interactive display screens. 3D presentations and conferencing solutions are rapidly becoming popular with corporates. For instance, in 2013, at Gitex Technology Week, Sharp Middle East FZE showcased a gesture-controlled interactive wall display and a mirror-like monitor display for application in the retail sector.

OLEDs offer various unique properties such as transparency, surface light source, and flexibility. Certain major players and start-ups operating in the LED products market have started manufacturing and offering OLED lighting products. There are significant growth opportunities for other key players in OLED lighting products. However, efficiency of these lighting systems is comparatively low at present, but substantial investment in OLED technology development is expected to enable key players to introduce more energy- and cost-efficient lighting products in the near future.

Major companies in the regional market are focused on research and development activities, in order to innovate novel products and capitalize on increasing consumer demand across the region. For instance, in 2013, Sharp Middle East FZE, a subsidiary of Sharp Corporation, launched 90” Aquos LED—the world’s largest commercially available television—in the Middle East. Furthermore, in 2012, BenQ, a provider of digital lifestyle innovations and visual display solutions, launched a new product line with large displays including digital signage and touch integrated flat panel display (FPD). Digital signage deployment is high in KSA, due to growing hospitality, retail, travel, and tourism industries in the country. This, in turn, is driving growth of the FPD market in the region.

In 2014, the ESMA issued a directive banning sales of incandescent light bulbs. According to the authority, conventional lighting products such as incandescent and fluorescent bulbs consume more energy than other bulbs such as LED and ELD light products in the market and also contain hazardous mercury. The organization imposed import ban on incandescent bulbs from July 1, 2014, and sales ban from January 1, 2015. Major players and certain governments in the region are focusing on investing in R&D related to semiconductor technology. The Abu Dhabi government launched Advanced Technology Investment Company (ATIC) that focuses on investment in the semiconductor industry, which in turn is expected to drive growth of the LED light products market in the region. 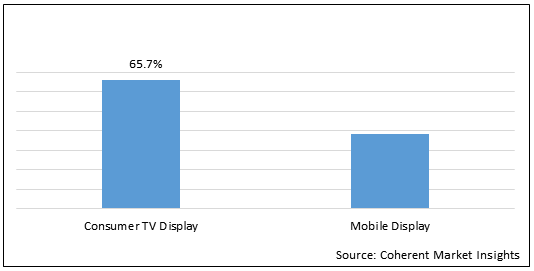 High initial cost of LED displays for fixed installations is expected to hamper growth of the GCC and Levant LED & OLED lighting products and displays market during the forecast period. Average cost of a commonly used 3x2 meter LED display varies between US$ 15,000 and US$ 25,000. This is significantly higher as compared to conventional advertisement media such as textual banners and printed hoardings. High initial costs of outdoor LED displays for fixed installations deter customers from purchasing these outright. They instead opt to rent such displays.

Rapid transition towards superior display technologies is expected to hinder the GCC and Levant LED & OLED lighting products and displays market growth over the forecast period. Since the global LCD market is highly saturated with the presence of major manufacturers such as Panasonic, Samsung, and LG. However, the introduction of more advanced technologies such as LED and OLED has led to a massive transition from conventional display to the aforementioned energy-efficient and high contrast displays. Most flat panel display (FPD) manufacturers of LCD panels are shifting towards flexible LED displays, in order to gain a competitive advantage in the market.

LDE and OLED lighting products offer a combination of power and longevity, as well as the possibility to provide the highest levels of color depth and brightness. The biggest advantage of using OLED technology in lighting is that it consumes lesser energy than any other lighting device. It is highly durable and does not need to be serviced too often. Furthermore, as a result of the latest developments, there are now powerful, long-lasting batteries available for use with most OLED lighting products. Moreover, as pointed out above, there are many benefits and advantages of using LEDs over and above the benefits they provide in terms of energy efficiency, durability, and reliability. For instance, while LED lights tend to consume more energy than incandescent ones, it is a well-known fact that LED lights can last up to ten times longer than incandescent bulbs.

Increasing adoption of OLED displays in smartphones is expected to boost the GCC and Levant LED & OLED lighting products and displays market growth over the forecast period. Smartphone manufacturers are increasingly adopting OLED displays as it provides improved image quality with better contrast, higher brightness, and wider angle, lower power consumption, and simple design that enables flexible and transparent displays. With growing demand for smartphones, the adoption of OLED displays has surged up. Hence, such factors are expected to boost market growth.

Furthermore, growing demand for AMOLED displays in AR/VR headset applications is expected to accelerate growth of the GCC and Levant LED & OLED lighting products and displays market in the near future.

What is projected market size and CAGR for the market?

What are major challenges involved in the market?

Rapid transition towards superior display technologies is expected to hinder the market growth over the forecast period.

What are lucrative opportunities in the market?

Growing implementation of flexible displays can provide lucrative growth opportunities in the market.

What are prominent trends in the market?

New product launches by key companies is one of the major trends in the market.

Constant technology development in monitor display is expected to propel the market growth over the forecast period.