OLED displays are the self-lighting flat panel display, in which organic material is assembled between two conductors. These displays can emit bright light when an electric current is passed through them and thus they do not require any backlight for operation. Without a backlight, the thickness of OLEDs can be reduced significantly and made more power-efficient compared to LCD and LED displays. Furthermore, organic LED displays are gaining traction among consumers due to their better image quality and high pixel switching speed. 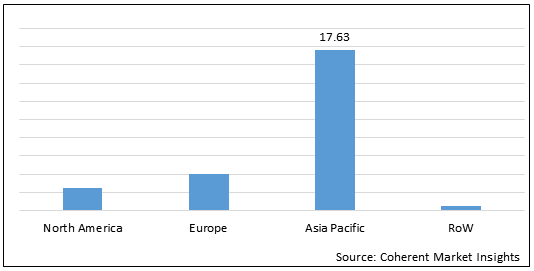 Asia Pacific held dominant position in the global OLED displays market in 2020, accounting for 71.6% share in terms of volume, followed by Europe and North America, respectively.

Increasing application of OLED displays is expected to propel the global OLED displays market growth over the forecast period. OLED-based devices have started finding applications in various sectors worldwide. OLED technology is being adopted in media players, digital cameras, mobile phones, television, wearable devices, etc. Many major market players such as Sony, Samsung, and LG have launched a number of products with OLED display, in order to expand their product portfolio and gain a competitive edge in the market.

Reduction in OLED TV prices can present lucrative growth opportunities. The raw material used in the manufacturing of OLEDs is highly-priced. Larger display size means higher manufacturing costs. Currently, OLED TVs cost much higher compared to other competing technologies. Developments in OLED technology in upcoming years and reduction in the cost of raw material is expected to cut down the cost of OLED TVs, hence driving the market in the near future. Furthermore, emergence of new market players and mass production of OLED TVs will contribute to reducing the price of OLED TVs and will drive the market for OLED displays.

Constant competition between OLED and LCD technologies can provide major business opportunities.  OLED technology offers numerous advantages with energy efficiency an eco-friendliness being major attributes. OLED displays are expected to witness high penetration in the near future, owing to its biodegradability in developed countries. Moreover, OLED displays are expected to reduce electricity consumption due to rising demand and supply gap for electricity globally. Enhanced features such as wider range of colors increase the number of times per second a display redraws data, transparency, thinner dimension, better flexibility, and enhanced 3D adaptability. Increasing market share and popularity of active-matrix OLED (AMOLED) is also expected to drive the OLED display market globally.

According to Coherent Market Insights’ analysis, in 2011, OLED TVs accounted for 2% of the market share in the global OLED displays market. OLED TVs offer better viewing angles and better color gamut; however, the screen resolution offered is poor. OLED screens are faster, with the response time in the range of nanoseconds with no motion blur. Currently, the higher cost of OLED TVs is hindering the growth of this segment; however, reduction in cost in the near future is likely to contribute significantly to the global OLED displays market.

OLED displays find number of applications in industries such as consumer electronics, information technology, industrial automation, and the energy sector. With growing applications of OLEDs and flexible displays, OLEDs are expected to form the mainstream market in the coming years. 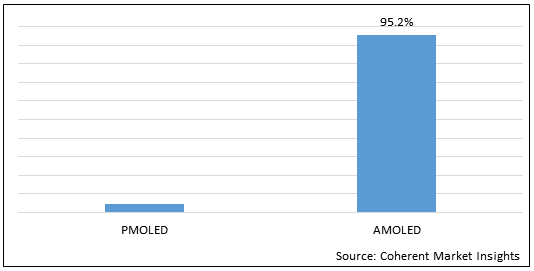 Low penetration rate of OLED technology is expected to hinder the global OLED displays market growth over the forecast period. Since the OLED displays are significantly high, its penetration rate is very low as compared to other contemporary technologies. Further, as a result of the initial launch of LCD technology, the customer often perceives OLED technology as quite complex and expensive as compared to the former. Such hindrance in the fast adoption of the technology is creating a gap between the needed volume manufacturing to compete with other leading technologies.

Key companies in the market are focused on deals and agreements, in order to enhance the market presence. For instance, in May 2019, Rit Display, a supplier of OLED panels, entered into a contract with PlayNitride Inc. to develop next-generation micro-LED technology for wearable devices.

An organic light-emitting diode, or OLED display, is a new display technology that utilizes light-emitting diodes (LEDs) to create images on a flat screen. The organic diodes emit light in response to a direct electric current running through them, just like an LED. Because of its unique manufacturing process, it is said to offer the best out of all display technologies - energy efficiency, reliability, and high contrast ratio. Unlike LCDs or projectors, OLED displays do not use liquid crystals. This eliminates the need for frequent clean-ups. In addition to eliminating the need for liquid crystals, OLED displays are also more durable than their counterparts. Compared to LCDs and other common display technologies, OLEDs have longer life spans and are much better when it comes to scratching and scuffing. In fact, even static electricity can be avoided with the help of an anti-static ribbon over sensitive display areas.

Increasing demand for AMOLED displays in AR/VR headset applications is expected to boost the global OLED displays market growth over the forecast period. AR/VR headsets have been used for numerous applications including simulation and training. Since these headsets provide an immersive experience, they have been used in the military for combat training, healthcare for surgical operations, and gaming as well. AMOLED refers to active-matrix organic light-emitting diodes and offers eye-searing contrast ratios, better off-axis viewing angles, and a brighter overall picture.

Moreover, growing financial supports from governments for OLED lighting research is expected to accelerate growth of the OLED displays market in the near future.

Which region held dominant position in the market?

Asia Pacific held dominant position in the global OLED displays market in 2020, accounting for 71.6% share in terms of volume.

What are key propelling factors in the market?

Lucrative advantages offered by OLED technology is expected to drive growth of the market during the forecast period.

What lucrative opportunities in the market?

Reduction in OLED TV prices can present lucrative growth opportunities in the market.

What are prominent trends in the market?

Increasing demand for OLED TV displays is one of the prominent trends in the market.

What are major companies in the market?