Gin is an alcoholic beverage that is basically produced by the distillation process and composed of different grain and flavors. The main ingredient present in the gin is juniper berries and gin is a native Dutch. It was originally produced to cleanse the blood of the people suffering from kidney disorders. Some of the cereal grains used to produce to gin are rye, barley, corn, and wheat and because of this, the gin is clear. However, some may get a golden yellow color due to different production processes. The use of juniper makes a unique flavor which makes it different from other liquor. Gin is mainly drink with mixed alcohol or it can be consumed straight. Moreover, the gin also has various health benefits such as blood purification.

Changing demographics in India projected to augment the market growth of gin in India. According to the Coherent Market Insights, the legal drinking age in India varies from state to state. For instance, 18 years in Goa, Uttar Pradesh and Karnataka, 21 in Tamil Nadu and Andhra Pradesh, and 25 in Maharashtra, Delhi, and Punjab. Such a statistic serve India as an ideal country for the high growth of the gin market.

On basis of the zone, South zone dominated the global India gin market in 2018, accounting for 34.8% share in terms of volume, followed by West zone and North zone. 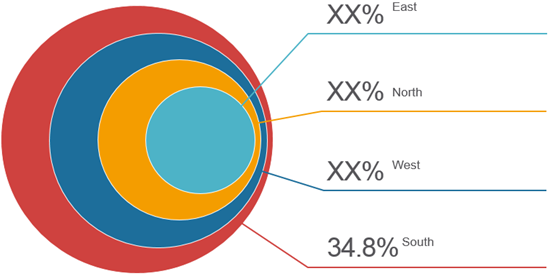 Concern such as labeling requirements rules imposed by the Food Safety and Standards Authority of India (FSSAI) make production and distribution of alcohol very complex activity as requires various touch points with administrative authorities around the various states of India. This is expected to hamper the market growth of gin.

Lower preference for gin in India as the majority of consumers in India prefers brown spirits such as brandy, whiskey, and rum over white spirits such as gin, vodka, and white. This is expected to hinder the market growth of gin. According to the Coherent Market Insights, white spirits accounted for a mere 5% share in overall IMFL consumption of the country for the year 2014. Hence, the high demand for brown spirits are likely to curb the growth of the gin market in the country.

Strong distribution network among leading Indian-made foreign liquor players is projected to favor the market growth over the forecast period. According to the Coherent Market Insights analysis, Radico has the second-largest distribution network in India, after United Spirits. It sells through 35,000 retail outlets that cater to almost 80% of India’s liquor consuming areas. It has also made inroads into the Canteen Stores Department (CSD).

Increasing consumption of alcohol among women is projected to raise the demand for a white spirit such as gin and vodka this in turn is expected to foster market growth. According to the Coherent Market Insights analysis, women are 50% more likely to drink to get drunk, and twice as likely to get drunk unintentionally. Moreover, young women are also more likely than young men to drink and approximately 5% of adult women consume alcohol on average.

The rising number of bars in India is projected to propel the growth of the India gin market over the forecast period. For instance, in January 2019, Sofitel Mumbai BKC launched a new gin bar, named Jyran Gin Bar, at Jyran – Tandoor Dining and Lounge. This bar is first of its kind in Mumbai and its menu comprises gin cocktails. Hence, an increasing number of bars in the region will favor the market growth of gin.

Increasing rebranding &redesigning by major players is expected to propel the market growth of gin over the forecast period. For instance, in June 2019, Porter’s Gin has launched a new bottle design across its markets featuring an update to the gin’s branding and logo developed by design agency Stranger & Stranger. It is available in nine markets including Singapore, Japan, China and France, Porter’s Gin plans to launch into the US, India, Australia and several other European markets by 2019. 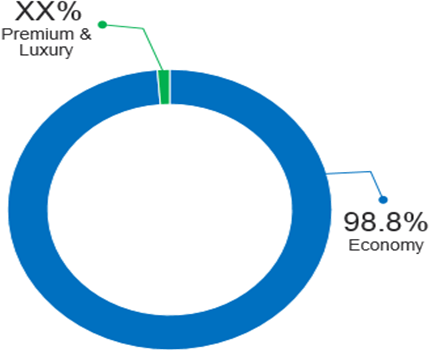 On the basis of product type in 2018, the Economy segment has accounted the largest market share of 98.8% in terms of volume, followed by premium & luxury 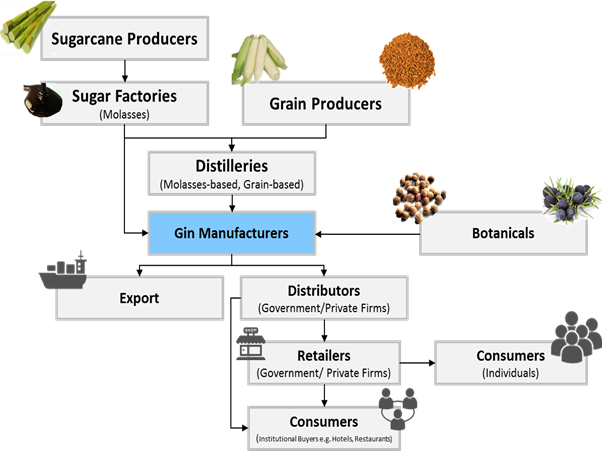 Gin is an alcoholic beverage. This is a distilled alcoholic beverage that is produced from grain and various flavors with botanicals. This alcohol beverage produced from range of cereal grains such as rye, barley, corn, and wheat. The aroma and flavors in gin come from juniper berries as it is responsible for pine flavor. Moreover, the almond, fennel, cassia, coriander, anise, angelica, and citrus peels are the most commonly used botanical ingredients in the production of gin.

What are the growth estimates for India gin markettill 2027?

The India gin market is estimated to reach around US$ 413.7 Million by the end of 2027, in terms of revenue.

Which are the prominent India gin market players?

What are the key factors hampering growth of the India gin market?

Lower preference for gin in India as the majority of consumers in India prefers brown spirits over white spirits such as gin is one of the major factors that is expected to hamper growth of the market over the forecast period.

What are the key factors driving growth of the India gin market?

Expanding urban population in Indiais one of the major factors that is expected to propel growth of the market over the forecast period.

What is the Compound Annual Growth Rate (CAGR) of the India gin market for next 8 years?

Which segment based on zone, accounted for the highest demand in the India gin market?

Among zones, South zone dominated the India gin market in 2018, accounting for 34.8% share in terms of volume, followed by West zone and North zone.